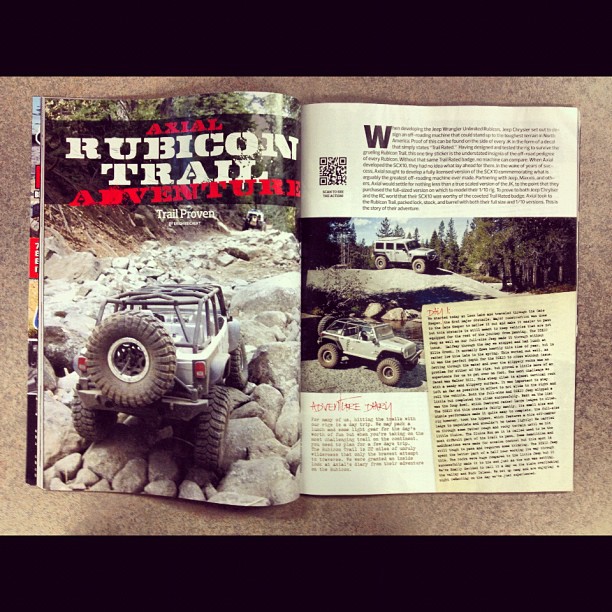 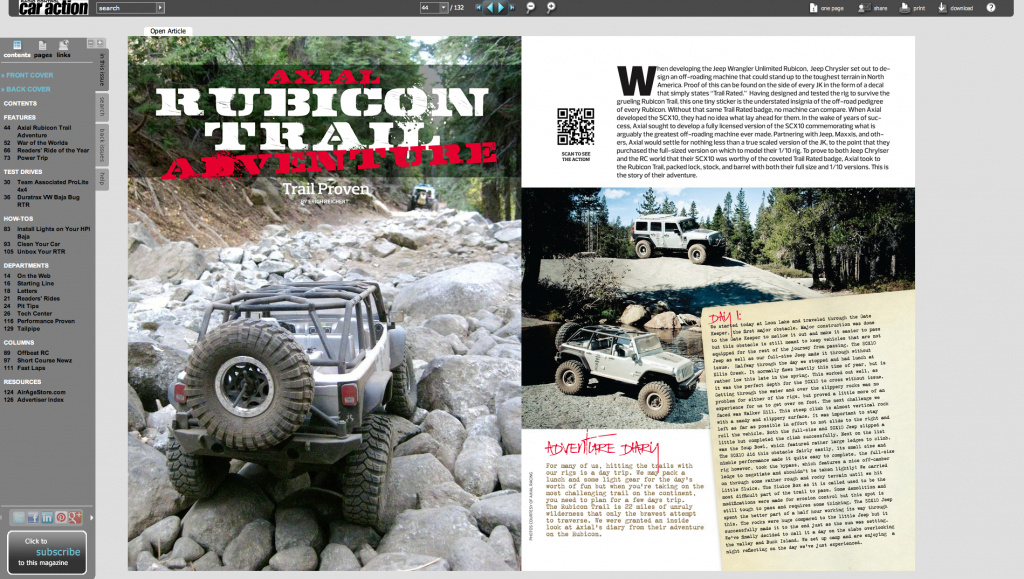 When developing the Jeep Wrangler Unlimited Rubicon, Jeep Chrysler set out to design an off-roading machine that could stand up to the toughest terrain in North America.  Proof of this can be found on the side of every JK in the form of a decal that simply states “Trail Rated.”  Having designed and tested the rig to survive the grueling Rubicon Trail, this one tiny sticker is the understated insignia of the off-road pedigree of every Rubicon.  Without that same Trail Rated badge, no machine can compare.  When Axial developed the SCX10, they had no idea what lays head for them.  In the wake of years of success, Axial Sought to develop a fully licensed version of the SCX10 commemorating what is argubaly the greatest off-roading machine ever made.  Partnering with Jeep, Maxxis, and others, Axial would settle for nothing less than a true scaled version of the JK, to the point that they purchased the full-sized version on which to model their 1/10 rig. To prove to both Jeep Chrysler and the RC world that their SCX10 was worth of the coveted Trail Rated badge.  Axial took to the Rubicon Trail, packed lock, stock, and barrel with both their full size and 1/10 versions.  This is the story of their adventure.

For many of us, hitting the trails with our rigs is a day trip.  We may pack a lunch and some light gear for the day’s worth of fun but when you’re taking on the most challenging trail on the continent, you need to plan for a few days trip.  The Rubicon Trail is 22 miles of unruly wilderness that only the bravest attempt to traverse.  We were granted an inside look at Axial’s diary from their adventure on the Rubicon.

We started today at Loon Lake and traveled through the Gate Keeper, the first major obstacle. Major construction was done to the Gate Keeper to mellow it out and make it easier to pass but this obstacle is still meant to keep vehicles that are not equipped for the rest of the journey from passing. The SCX10 Jeep as well as our full-size Jeep made it through without issue. Halfway through the day we stopped and had lunch at Ellis Creek. It normally flows heavily this time of year, but is rather low this late in the spring. This worked out well, as it was the perfect depth for the SCX10 to cross without issue. Getting through the water and over the slippery rocks was no problem for either of the rigs, but proved a little more of an experience for us to get over on foot. The next challenge we faced was Walker Hill. This steep climb is almost vertical rock with a sandy and slippery surface. It was important to stay left as far as possible in effort to not slide to the right and roll the vehicle. Both the full-size and SCX10 Jeep slipped a little but completed the climb successfully. Next on the list was the Soup Bowl, which featured rather large ledges to climb. The SCX10 did this obstacle fairly easily, its small size and nimble performance made it quite easy to complete, the full-size rig however, took the bypass, which features a nice off-camber ledge to negotiate and shouldn’t be taken lightly! We carried on through some rather rough and rocky terrain until we hit Little Sluice. The Sluice Box as it is called used to be the most difficult part of the trail to pass. Some demolition and modifications were made for erosion control but this spot is still tough to pass and requires some thinking. The SCX10 Jeep spent the better part of a half hour working its way through this. The rocks were huge compared to the little Jeep but it successfully made it to the end just as the sun was setting. We’ve finally decided to call it a day on the slabs overlooking the valley and Buck Island. We set up camp and are enjoying a night reflecting on the day we’ve just experienced.