The 1.9″ trail truck scene is full of interesting and capable trucks, but at this moment two rigs in particular own the spotlight in the realistic-4X4 arena: the Axial SCX10 II and the Traxxas TRX-4. The first-gen SCX10 created the entire 1.9″ trail-truck category and instantly became the standard for the class, spurring other brands to join the fray during a run that ran over six years. In 2016, Axial went back to the drawing board for the SCX10 II, which shares its name with the first-gen truck and little else. The SCX10 II recalibrated the standard for 1.9″ performance to keep Axial on top. In 2017, Traxxas (finally!) dropped a bomb on the trail-truck scene in the form of the TRX-4. The truck’s big debut revealed a whole new side of “the fastest name in radio control” with a truly innovative rig. Portal axles, high-low transmission, remote-locking differentials, and the most detailed Land Rover Defender body ever to grace an RTR instantly made the TRX-4 a must-see machine and an instant top-trail-truck contender. But how do the SCX10 II and TRX-4 really stack up, side by side, in action together? We dove in to find out. 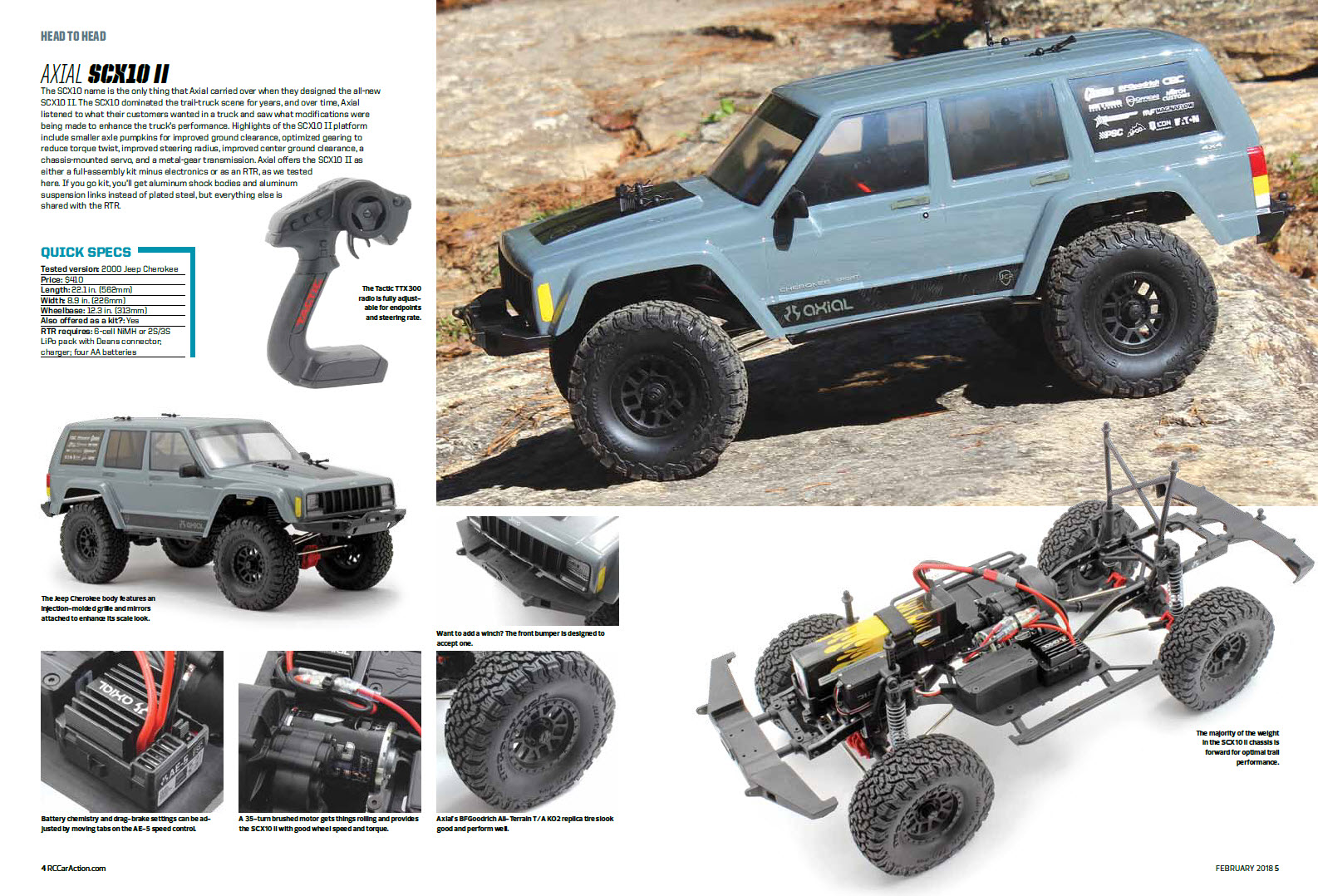 The SCX10 name is the only thing that Axial carried over when they designed the all-new SCX10 II. The SCX10 dominated the trail-truck scene for years, and over time, Axial listened to what their customers wanted in a truck and saw what modifications were being made to enhance the truck’s performance. Highlights of the SCX10 II platform include smaller axle pumpkins for improved ground clearance, optimized gearing to reduce torque twist, improved steering radius, improved center ground clearance, a chassis-mounted servo, and a metal-gear transmission. Axial offers the SCX10 II as either a full-assembly kit minus electronics or as an RTR, as we tested here. If you go kit, you’ll get aluminum shock bodies and aluminum suspension links instead of plated steel, but everything else is shared with the RTR. 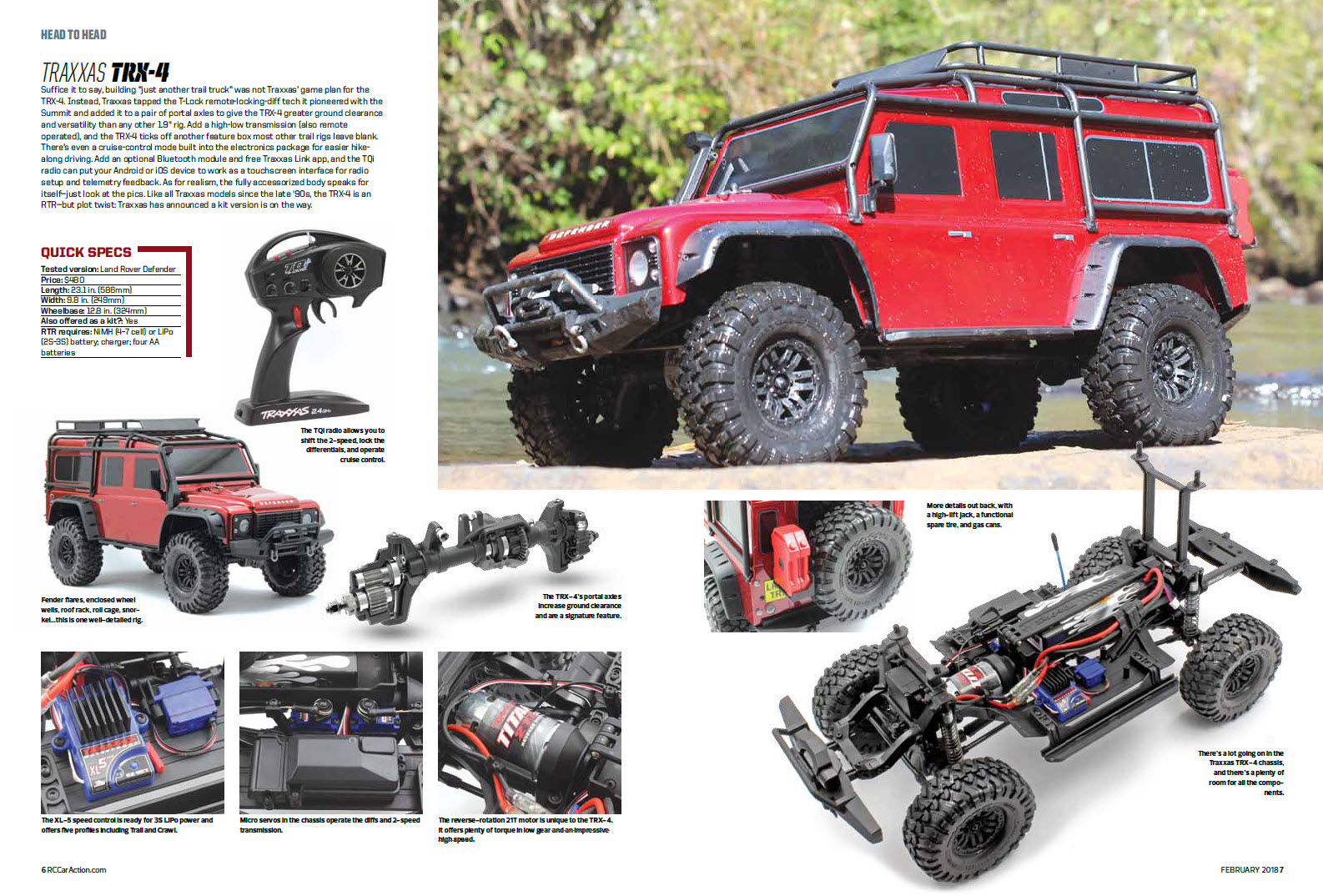 Suffice it to say, building “just another trail truck” was not Traxxas’ game plan for the TRX-4. Instead, Traxxas tapped the T-Lock remote-locking-diff tech it pioneered with the Summit and added it to a pair of portal axles to give the TRX-4 greater ground clearance and versatility than any other 1.9″ rig. Add a high-low transmission (also remote operated), and the TRX-4 ticks off another feature box most other trail rigs leave blank. There’s even a cruise-control mode built into the electronics package for easier hike-along driving. Add an optional Bluetooth module and free Traxxas Link app, and the TQi radio can put your Android or iOS device to work as a touchscreen interface for radio setup and telemetry feedback. As for realism, the fully accessorized body speaks for itself—just look at the pics. Like all Traxxas models since the late ’90s, the TRX-4 is an RTR—but plot twist: Traxxas has announced a kit version is on the way. 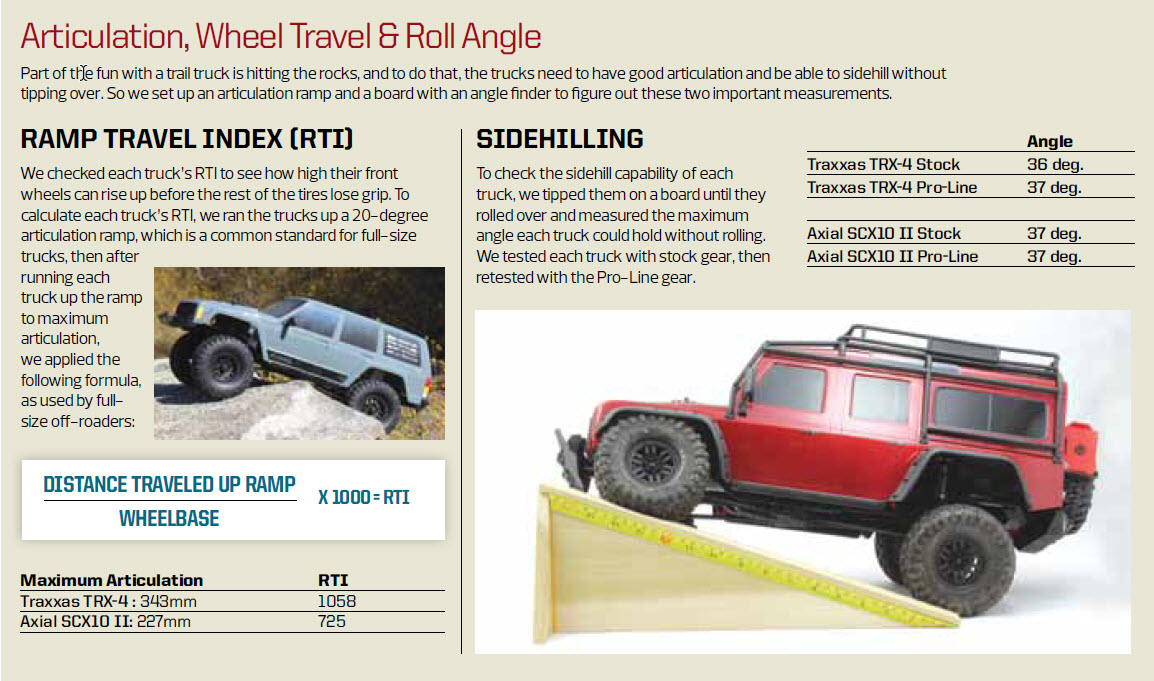 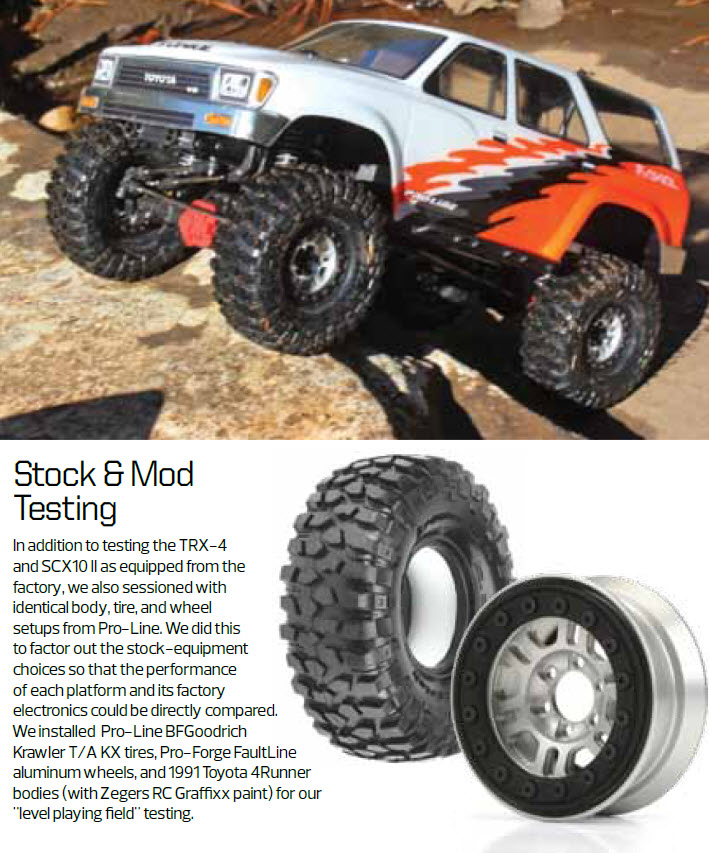 Locking Diffs & High-Low Trans: Do You Need Them?
Our test notes are based on side-by-side testing with locked axles and transmissions in “low gear.” In the case of the SCX10 II, it’s not like you have a choice—it’s a single-speed truck with no differentials. But the TRX-4 is a different story: you can lock and unlock its differentials, and shift it into high gear—and that changes up the comparison  quite a bit. Second gear isn’t an advantage for tough trail work, but when you’ve got smoother ground to cover between challenging sections, it’s nice to be able to kick it into  “high” and hustle down the trail. That mode ties in nicely with the T-Lock diffs, since locked axles aren’t the hot setup for driving at speed. Flip the TQi’s 3-position switch, and  the TRX-4 unlocks its rear diff, or both diffs. Unlocking both diffs was standard procedure for high-gear fun, and the front-lock-only setting can help “dig” the front end over to  get a better position on a tough line. These are tricks the SCX10 II RTR simply can’t do (though you can get a 2-speed as an accessory). Of course, extra features mean extra  cost, and the TRX-4 will run you $70 more than the SCX10 II. But that extra $70 also gets you a more detailed body, spare tire, aluminum shocks instead of plastic, and a more  versatile transmitter. Do you need locking diffs and a high-low trans? No, but after driving the TRX-4 side by side with the SCX10 II, we sure want them. 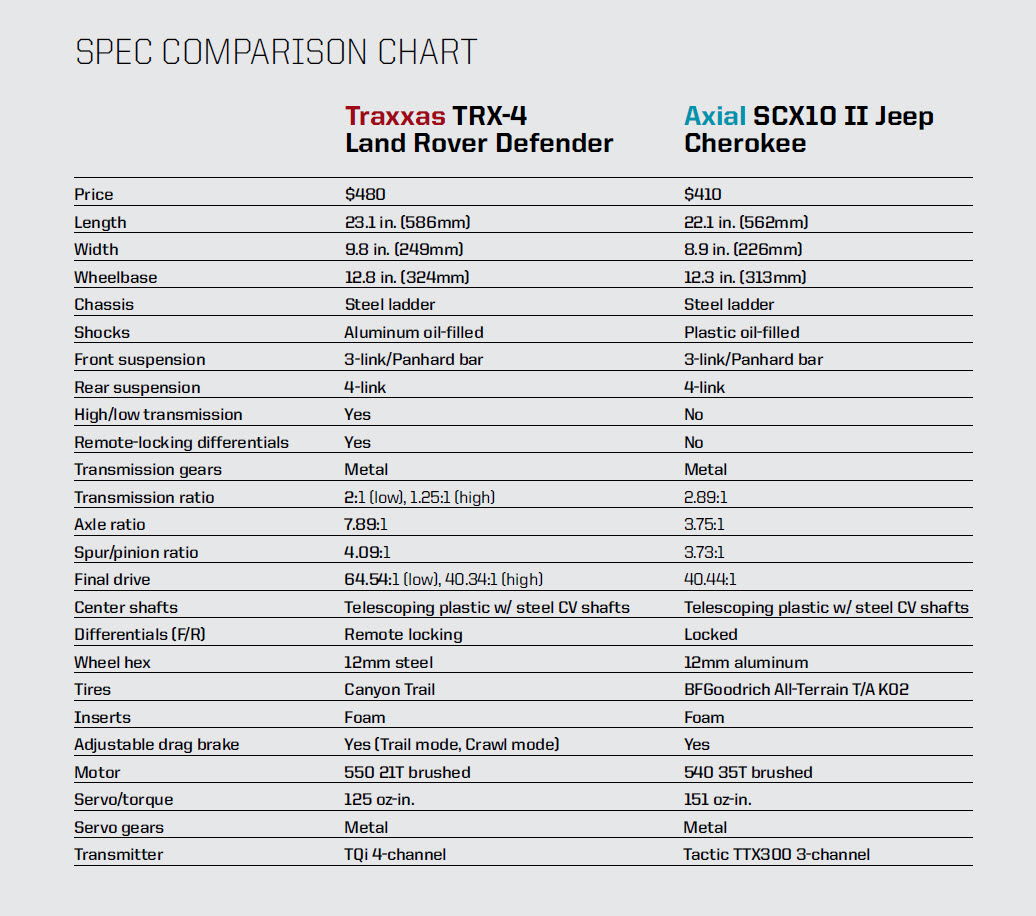 AXIAL SCX10 II: Out of the box, I was really impressed with the capabilities of the SCX10 II on all the surfaces that I drove it on. The steel lower links and scale tires are a nice touch, and I really like that there are lots of option parts available for the truck. I was also very happy with the stock speed control; it’s very smooth and has a quick transition from forward to reverse, and the drag brake is strong.

TRAXXAS TRX-4: The TRX-4 is more expensive than the SCX10 II, but when you take a look at what you are getting for the money, I think it’s worth it. I really like that it comes with a 2-speed and locking diffs, and the portal axles really impressed me with the clearance that they provided on the trail. I did find that the extra weight of the body made the truck tip pretty easily. Once the Pro-Line gear was installed, the TRX-4 felt like a new truck, and its performance really impressed me. In the end, the options that the TRX-4 comes with and the improved performance after replacing the stock body made the Traxxas TRX-4 the truck for me

AXIAL SCX10 II: I’m more of a Jeep fan, so I was immediately drawn to the look of the stock SCX10 II. On the trail, the SCX10 II had good speed and didn’t have any issues, but traction was somewhat limited by the replica tires and firm compound when it was time to take on larger rocks. The speed control is very smooth, and the drag brake did a great job of keeping the tires locked up when stopping on hills. Changing over to the Pro-Line gear improved performance greatly in the traction department, and that made the truck more fun to drive and more capable on the rocks.

TRAXXAS TRX-4: On the trail, the TRX-4 drives well, and I was impressed with how well the high-ground clearance chassis and portal axles did when driving over roots and other small obstacles. When the time came to hit the rocks, however, the TRX-4’s body weight came into play and made it tip easier than I would have liked. After switching to the Pro-Line gear, the body alone made a big difference and allowed the TRX-4 to perform well in all areas. Throw in the fact that it also has a 2-speed transmission and locking diffs available and you have a winner. If I were on the market for a new trail rig, the TRX-4 would be the one for me.

AXIAL SCX10 II: Out of the box, I was happy with the performance of the SCX10 II on the trail and on the rocks. I was impressed by its approach and departure angles, despite it having a front bumper and trailer hitch that sticks far out from the chassis. The speed control has great feel, and I was impressed with its solid drag brake and instant reverse. While driving with the Pro-Line gear installed, I liked the improvement that the truck had in the traction department; it gave the truck that little extra that I was looking for. The low-hanging axles and exposed rod ends on the lower links did cause a few hang-ups in areas where the TRX-4 drove through without hesitation.

TRAXXAS TRX-4: I’m pretty impressed with the TRX-4; it has everything a trail truck should have. The scale details on the body are impressive, but the extra weight that they add makes the truck tip easier. The stock bumpers hang up more often than I’d like to see, but the TRX-4 still had plenty of articulation, traction, and power available to pull or push on through various obstacles. The 2-speed transmission is a plus, and the portal axles did a great job of clearing obstacles that hung up the SCX10 II from time to time. After swapping to the Pro-Line components, the performance difference of both trucks improved, but the TRX- 4 benefitted more and it has a little more to offer, so it ended up being the truck for me.

THE WINNER
After a bunch of wheel time in stock and mod trim, we can tell you these are two very good trucks—no surprise there. The Axial SCX10 II is the less-expensive truck of the two, offers good performance out of the box, and has a ton of aftermarket support. But the stock tires could use a little more grip, and it does get hung up on the trail a little more than the TRX-4. The only place where the TRX-4 struggles in stock form is on larger obstacles where the weight of the body causes it to tip a little easier and the spare tire grabs on rocks and lightens up the front end. Of course, you can just remove the spare tire. Specs-wise, both trucks come to the party with every feature you would expect in an RTR trail truck. But then the TRX-4 adds portal axles, high/ low transmission, remote-locking diffs, cruise-control, aluminum shocks, and a much more detailed body (among other touches). It’s also $70 more than the SCX10, but that $70 is going a long way in extra features and capability. You can’t go wrong with the SCX10 II, it’s a great truck as thousands of Axial fans will attest. But our winner for this head-to-head is the Traxxas TRX-4 because it’s got the edge in performance and value. It costs a little more, but you get a lot more. 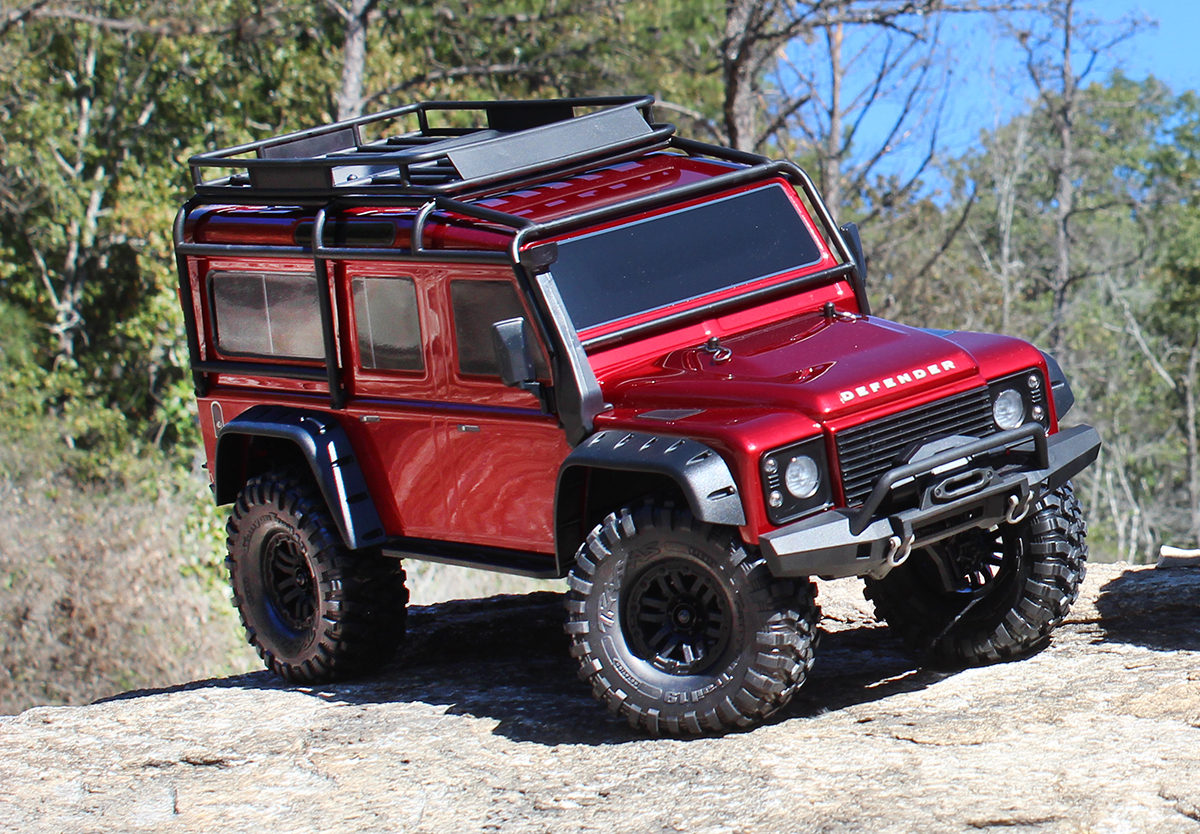