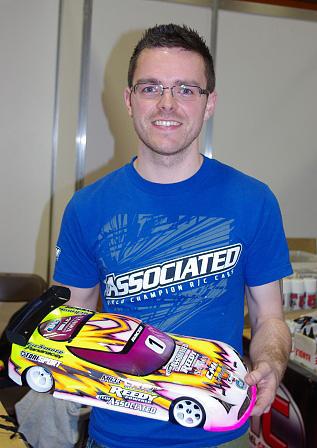 The NEC Autosport Show was the venue for the BRCA-promoted Autosport GT Cup, a chance to not only race in front of a motorsport-based audience but also an opportunity to promote RC racing to a large number of the general public. The weekend’s main event was the GT Cup race, and despite only limited running with the 10R5.1, Team Associated/Reedy teammates Olly Jefferies and Zak Smith arrived as potential front runners. As racing got underway on Saturday morning, it became immediately clear that these two were the drivers to beat.

The GT Cup was run using the Reedy Race format, so every driver raced the entire field at some point starting from various grid slots. This format makes for great racing and the public was soon two to three deep around the large carpet track watching the action.

Olly and Zak began notching up wins right from the start and showed a clear performance advantage over the rest of the field. Excellent handling, powerful Reedy Sonic 10.5 motors, and Reedy 6800mAh LiPo batteries made their lives a little bit easier.

Ending day one, it was clear that if Olly and Zak continued with their winning ways on Sunday, a tie break situation would arise. The fact that the fastest single race time would be used to break the tie piled pressure on the teammates. Now they would not just have to win their remaining races, but win at a very fast pace. As Sunday got underway, the fastest race time swapped between Olly and Zak, building up to a last race shootout for the pair.

Going into the last race of the weekend, Olly held the fastest time and he and Zak ended up in the last race together. You could not have manufactured a more dramatic conclusion. Both drivers started from mid-grid positions but were one-two at the end of lap one. Olly pulled a slight lead as both drivers got to a race pace that was capable of taking the title. Fast lap after fast lap were clocked as Zak kept Olly in his sights, then as the race drew to a conclusion, Zak closed in on Olly. The crowd was on its feet as the pair entered the last lap, but Olly kept a cool head and brought his Reedy/LRP-powered RC10R5.1 home to take the title.

Without a doubt, this was one of Zak’s best weekends and he pushed his team leader all the way to the end. Although slightly disappointing for Zak who nearly stole the show, it was a great 1-2 result for the AE team, and an even greater 1-2-3 result for Reedy/LRP, with Mark Stiles rounding out the podium in third.