Every legend has a beginning. Well into its fourth generation, the Suzuki Jimny has had a long career that specializes in bringing compact off road capability to enthusiasts worldwide. Designated the LJ1, the first generation Jimny first hit the trails in 1970. The open air, no door, Jeep-like ride was an instant success for Japanese automaker, Suzuki.

FMS brings the first generation Suzuki Jimny into the hands of RC and scale model enthusiasts in a big way. The giant 1/6-scale LJ1 is an impressively large and detailed RC vehicle that is as detailed as any static model that we’ve encountered before. 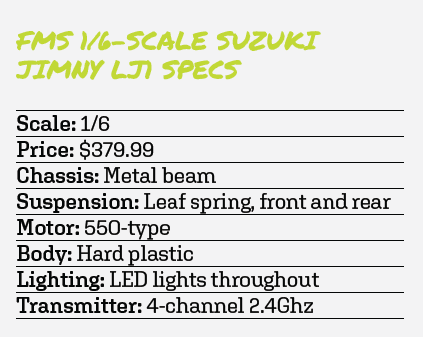 1970 saw the introduction of the LJ10, which weighed a mere 1,300 pounds and was powered by a 359cc two-stroke inline twin-cylinder engine. With its highly touted reliability, small displacement, small size, low price and unique market position, the Jimny LJ1 was made to break the traditional views on off-road vehicles. The FMS rendition of this unique off roader is set to do the same in the RC world. 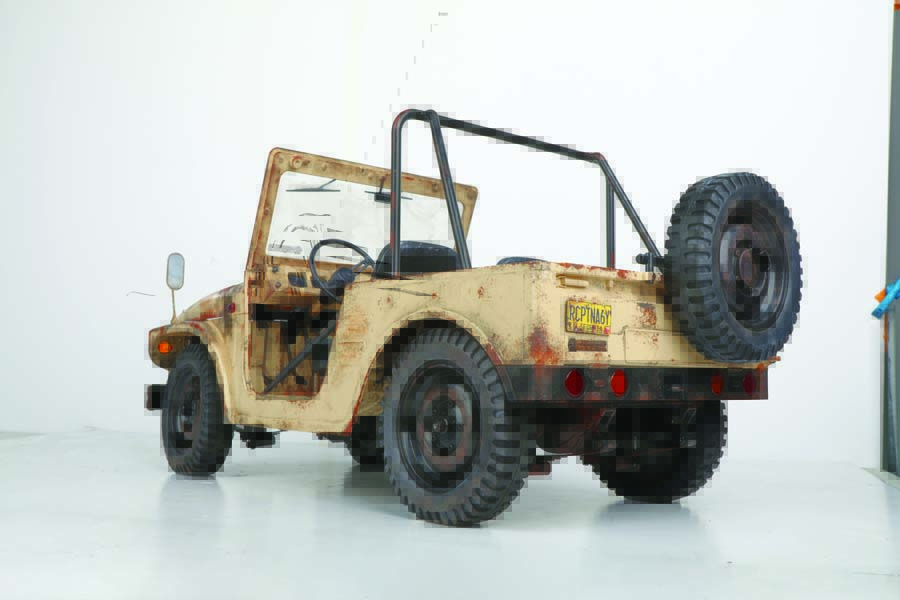 DETAIL PACKED
FMS’ officially licensed Jimny LJ1 is a rather large version RC for such a real-life compact vehicle. The 1/6-scale RC measures almost 21-and-a-half inches in length and is scaled perfectly to fit most 1/6-scale figures. The vehicle’s realistic foundation is based on a metal beam, non-load bearing chassis that contains front and rear leaf spring suspension and universal joints.
LJ1’s interior features soft-rubber-wrapped seats that have a cushion-like softness and can be folded forward to access the Jimny’s rear compartment. The interior detailing is simply stunning. From the adjustable windshield and safety bars at the door positions on both sides to the real fender-mounted mirrors, this RC is detailed in every way. Examining the instrument panel reveals a miniature shadow instrument panel complete with mechanical buttons.
Looking beyond the dash, you’ll also find a manual gearshift, a set of foot pedals and even a steering wheel that is linked to the steering servo. This means that the steering wheel will turn as the vehicle is driven. How is that for life-like realism? In the rear, the tailgate can be lowered and the spare tire carrier swings out to the right. An adjustable anti-roll bar provides convenient methods for future upgrades and customization options.
With all this detail, where are the “guts” of this RC you may be wondering. We were too actually. Popping the hood reveals the 550-type motor, ESC, receiver, power switch and battery in the engine bay. Just open the hinged hood for full access.

Lighting always makes an RC look more realistic and this first generation Jimny does not slack in that department. LED lights are included with the LJ1 and its headlights are always on by default. Provisions are built-in for front and rear turn signals and taillight upgrades if you so choose to install them. 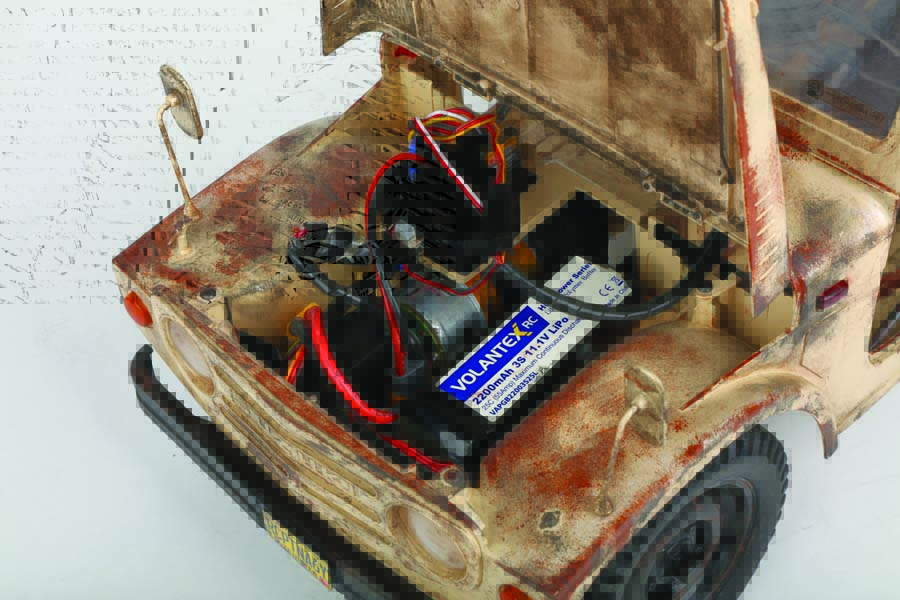 The battery and electronics are accessed from under the hood. 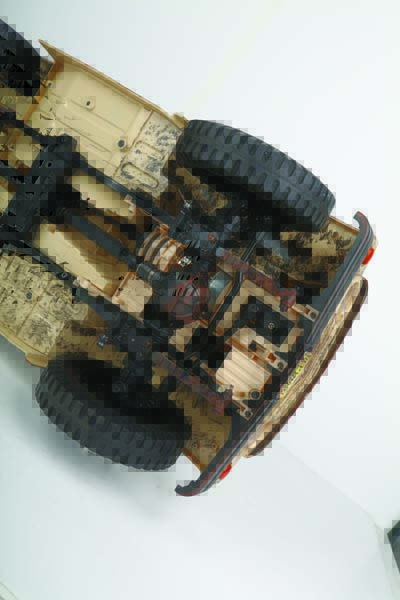 THe LJ1 uses realistic leaf spring suspension in the front and rear. 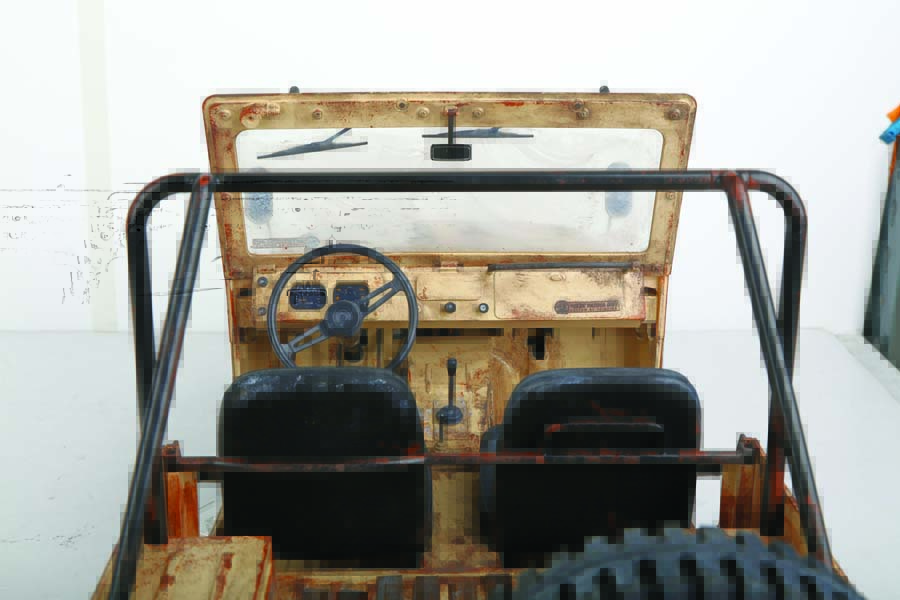 CUSTOMIZED
As great as the Jimny LJ1 already looked directly out of the box, avid RCCA readers should know that we also like to push things a little further in the customization department. We called up RC Patina Guy himself, Erick Padilla to see what magic he could do with it. With paintbrush in hand, he turned around a fully patina’d masterpiece.
Complete with a realistic patina paint job, Padilla added the aesthetics that a well-used and abused fifty year old Jimny may look like out on the trails. The worn metallic look really gives this Jimny the trail cred that we think it deserves. Even the vinyl driver’s seat is patched up and we absolutely love the rusted metal bars that are seen throughout the vehicle. All we need now is a 1/6-inch figure to round out this great looking RC. 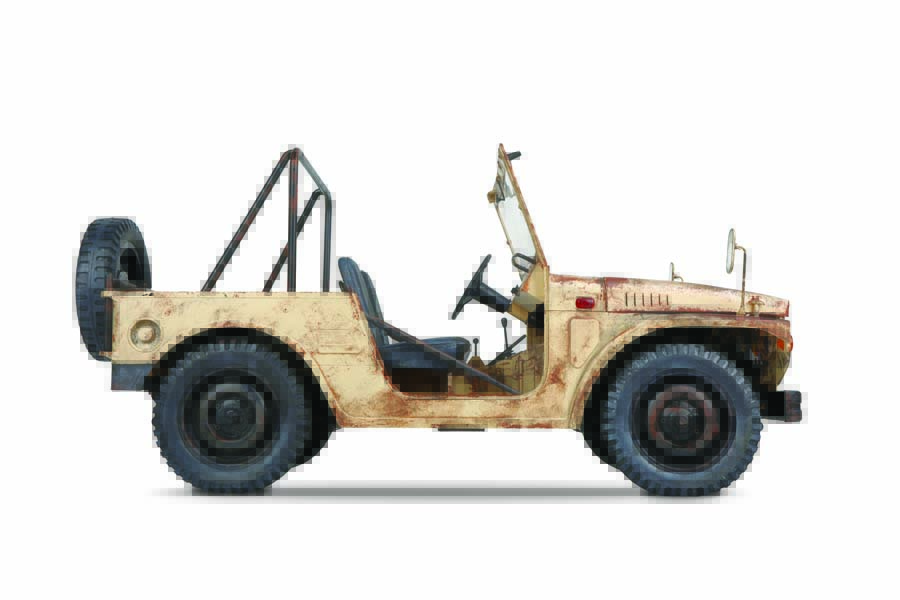 We charged up and installed a VolantexRC LiPo battery in it and hit the trail. When powered up, the LJ1 cruised around quite well and looked really good, especially with its LED lights on. The four-wheel drive vehicle performed as well as a scaled down leaf spring suspension rig would, bobbing and moving about on the trail.
Seeing the steering wheel moving, as it turned was especially cool. It’s worth noting that we consider this Jimny a fully detailed model kit that can be driven and not necessarily a fully capable crawler. That said, it’s still fun to drive and its size is impressive to say the least. It really does look great wherever it drives.

FINAL WORD
FMS really did a fantastic job in terms of the Suzuki Jimny’s scale looks and life-like detailed features. After seeing the weathered treatment Erick “RC Patina Guy” Padilla applied to the LJ1, we’re excited to see how other enthusiasts further modify this highly accurate off road vehicle.