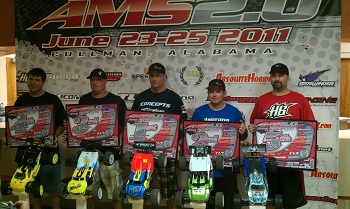 The E-Truggy class ran a dual A-main format which meant there were no throw-outs and each finish would count heavily toward the overall position. Martin Harrison and Steve Antill battled in A-1 with each sharing the lead position on several times. On the last lap of A-1, while leading, Steve encountered a mechanical problem which took him out of the lead position handing the last lap and victory to Martin Harrison. A-2 would once again be a battle between Harrison and Antill and this time it was Antill who came away with the win by slim margin of .7 tenths of a second after 10 minutes. Once overalls were tabulated Martin Harrison would be awarded the 1st place with Steven Antill 2nd and Nathan Harrison in 3rd. Martin’s choice of power was aMaxAmps.com 6500mah LiPo and Tekin RX8 system. Both Martin and Steve chose JConcepts all weekend long with Punisher bodies, Illuzion HD and Punisher rear wings and the trusty Sevens and Hybrid tire package for the two drivers were tough to beat all weekend long.