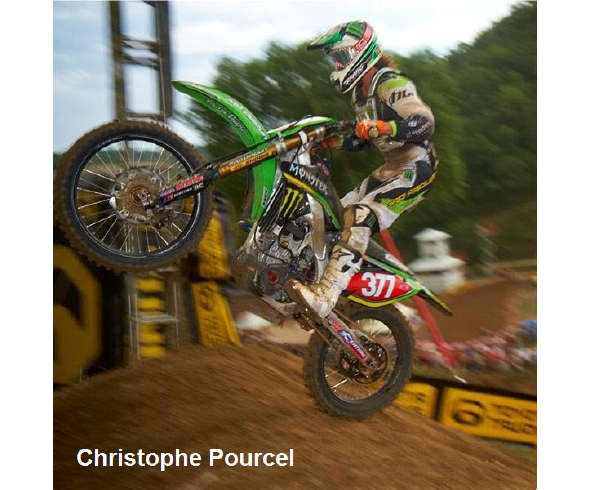 The Pro Circuit/Kawasaki/Traxxas 250 Lites team continued its dominance of the 2010 AMA Motocross season as Round 7 of the 12-round series came to Millville, MI for the Spring Creek Nationals. Traxxas-backed riders grabbed three podium spots in the motos, and swept second through fifth place in the overall. Series points leader Christophe Pourcel missed the top step of the box, but continues his reign with a 32-point lead over teammate Dean Wilson, and a 44 point gap on rival Trey Canard.

Dean Wilson got the holeshot on his Kawasaki KX250F and dueled with Martin Davalos, but crashed on lap four. Christophe Pourcel and Trey Canard moved up front and battled for the lead as Wilson found himself racing for third with fellow Traxxas-backed rider Jake Weimer, who seemed to have finally overcome a series of tough breaks in the first half of the season and was showing the speed that earned him the 2010 250 West Supercross title. As Pourcel and Canard traded the top spot, Jake Weimer held third with teammate Tyla Rattray close behind, ready to paint the podium Kawasaki green. Pourcel put Canard behind his rear fender with one final pass before the checkers to take yet another Moto 1 win. Canard came in second, and Jake Weimer made a long anticipated trip to the podium with his third-place spot. Tyla Rattray just missed the podium with fourth, and Dean Wilson placed sixth, slowed by an injured knee due to his lap-four crash.

As the gate dropped on Moto 2, Nico Izzi and Trey Canard ran side-by side up front with Kawasaki-mounted Dean Wilson and Jake Weimer on their fenders and Tyla Rattray close behind. As the pack settled, Canard took over the lead as Wilson stayed in passing range in second and teammates Weimer, Rattray, and Pourcel moved into fourth, sixth and seventh. Despite a sore knee and weakness from the heat and humidity, Wilson challenged Canard for the lead again and again, but was unable to take over the top spot. The sun went in and rain began to fall at the halfway point of Moto 2, bringing relief to the heat-addled riders that soon turned to a new challenge as the sprinkling became a pouring rain and the muddy track consumed tear-offs and compromised visibility. Wilson held second to the finish and also earned second overall, while Rattray moved up to fourth, earning third place overall. Jake Weimer fell back to fifth or the moto, giving him fourth in the overall. Christophe Pourcel finished in tenth, but combined with his Moto 1 win, he placed fifth overall—and retained his series points lead. Behind Pourcel, Pro Circuit/Kawasaki/Traxxas riders hold second (Wilson), fourth (Rattray), and ninth (Weimer) in series points.

Traxxas congratulates all the Pro Circuit/Kawasaki riders on their well-fought battle in Millville and applauds the hard work of the crew members, mechanics, and drivers who get the riders to the start line, race after race. We’ll see you in Washougal, WA for Round 8!