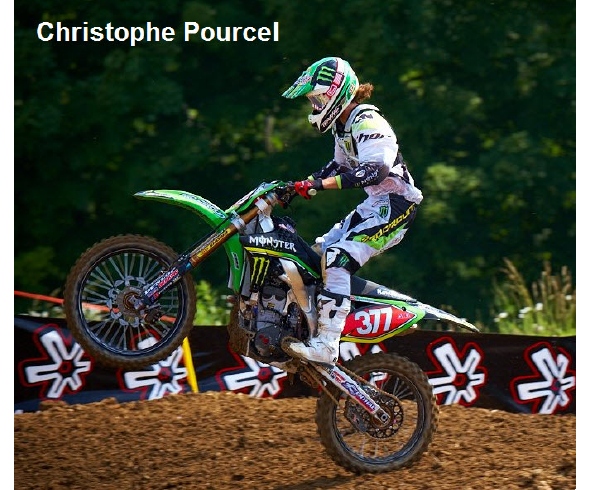 Mount Morris, PA: The third stop on the AMA Motocross circuit saw slippery, muddy conditions as rain fell on High Point Raceway, but it would take more than rain to slow down the Pro Circuit/Kawasaki/Traxxas team. After a powerful performance and second-place finish in Round 2, Traxxas-sponsored Tyla Rattray showed the stuff that made him the 2008 FIM MX2 champion by taking second place in both Motos at High Point to earn the overall win. Teammate Christophe Pourcel was also in fine form with a win in Moto 2 and enough points to keep him at the front of the points chase.

Traxxas-sponsored Christophe Pourcel took the holeshot in Moto 1, but the rain-slicked tracked proved a difficult adversary and the series points leader was not able to make his lead stick. Pourcel dropped to fourth by the ten-minute mark while teammate Tyla Rattray moved into second. Following Pourcel were fellow Traxxas-sponsored riders Jake Weimer and Dean Wilson in fifth and sixth. Rattray held his position to the end of the Moto to earn second place, while Pourcel moved up a spot to third, leading out Weimer in fourth. Dean Wilson had fallen back a position to sixth. The final ten minutes and two laps would see that order change again, but by the race’s end, all four of the Traxxas-sponsored Pro Circuit/Kawasaki riders had top-ten finishes. Tyla Rattray held onto second, Pourcel took fourth, and Wilson and Weimer earned fifth and seventh respectively.

Once again, Christophe Pourcel took the holeshot with his Traxxas-backed Pro Circuit/Kawasaki machine. Dean Wilson was close behind, and moved from fourth to second as the 40-rider field sorted itself out in the first few turns of the deeply rutted raceway. Tyla Rattray held fourth, then quickly dispatched Martin Davalos to move into third. Just six minutes into the race, Pro Circuit/Kawasaki/Traxxas riders held the top three positions as Pourcel lead out Wilson and Rattray, but a mis-timed jump knocked Wilson of his KX250F. Rattray moved into second as Wilson quickly remounted and began to recover lost ground from eighth place. As the race wore on and rain returned, Pourcel and Rattray went unchallenged while Dean Wilson moved as high as fifth before finishing the second Moto in sixth after dueling with Broc Tickle and Trey Canard. At the checkers, Christophe Pourcel took the Moto 2 win, but it was Tyla Rattray who would be crowned the overall winner. Rattray’s second place finishes in both Motos earned him 44 points, besting Pourcel’s fourth and first, which totaled 43 points. Dean Wilson finished fifth overall, and Jake Weimer finished tenth. In overall season points, the Pro Circuit/Kawasaki/Traxxas riders own the top three spots with Pourcel, Rattray and Wilson running 1-2-3.

The skies opened up as the riders gave their podium interviews, but the rain did not damp the high spirits of Rattray and Pourcel, or their mutual respect for each other. “It means a lot, I’ve been working hard for this,” said Tyla before thanking his sponsors, including Traxxas. “Dean made a mistake and went down, I got behind Christophe and was just following him. He’s got a phenomenal talent and some good lines out there.” Said Pourcel of his victorious teammate, “I like Tyla, I have to give it up for him,” before concluding with, ”a big thanks to Traxxas!” Thanks for the shout-outs guys, everyone at Traxxas is excited to be part of the winning Pro Circuit/Kawasaki team!

AMA Motocross comes to Budd’s Creek Raceway for Round 4, with full coverage on SPEED. Tune in June 19, 8pm Eastern (5pm Pacific) to see all the action!