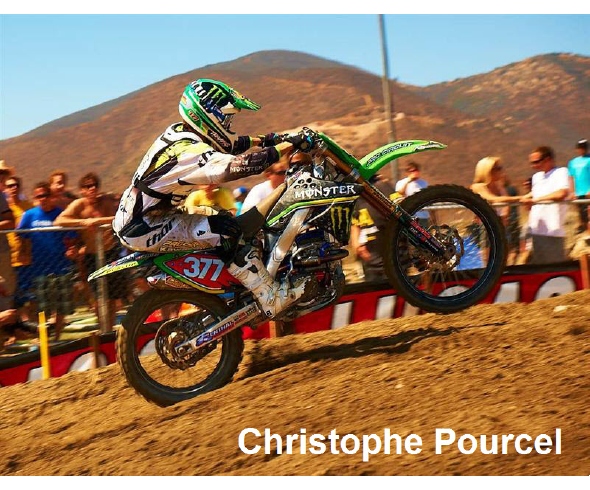 Pala, CA: What better way to open a brand-new race facility than to host the final round of the AMA Motocross series? Pala Raceway had that honor, as the difficult and dusty track pushed the world’s fastest motocross riders to their limits. The final round of the 250cc series was to be a battle between series points leader Christophe Pourcel and rival Trey Canard, but Pourcel suffered a dislocated shoulder in the first Moto that eliminated his chance at the championship title he had worked so hard to earn. Teammates Dean Wilson and Tyla Rattray were left to carry the Pro Circuit/Kawasaki/Traxxas colors to the podium, which they did in convincing fashion. Here’s how it all went down…

Traxxas-sponsored Dean Wilson blasted out to the lead in Moto 1, with teammate Tyla Rattray close behind. As they pulled away, the battle of the race was for fourth as series points leader Christophe Pourcel dueled with rival Trey Canard. Halfway through the moto, Canard slipped while trying to pass Pourcel and rode into a Tuff Block, pitching himself over the bars. The relatively slow-speed crash caused no injury, but did provide ample time for Pourcel to streak away as Canard dropped back into the field. But Pourcel’s assured victory was short lived. With ten minutes left on the clock, Pourcel crashed and dislocated his shoulder, ending his moto with a DNF. Dean Wilson and Tyla Ratrray stayed on pace to go 1-2 for Moto 1, while Canard finished fourth with an 11-point advantage over Pourcel heading into Moto 2.

Another holeshot for Dean Wilson! The young rookie showed why he’ll be a rider to watch in the 2011 series as he unleashed his KX250F with a commanding lead. Trey Canard followed in second, and Traxxas-sponsored Tyla Rattray completed the top three. Absent from the field was Christophe Pourcel, who’s shoulder injury was too severe for him to compete. The championship was sealed for Canard, but there was still the matter of the Pala Nationals to be decided, and the Pro Circuit/Kawasaki/Traxxas team was riding to win. Ten minutes in, Rattray overtook Canard to move into second, eventually putting a 10-second gap on the Honda rider. The order remained Wilson, Rattray, Canard to the finish, clinching the top two spots in the overall for Wilson and Rattray.

Trey Canard was crowned the AMA Motocross 250 Champion, while Traxxas-sponsored riders Tyla Rattray, Dean Wilson, and Christophe Pourcel took second through fourth, in that order. Traxxas congratulates Mitch Payton and the entire Pro Circuit/Kawasaki team, including Jake Weimer who did not ride in Pala due to injuries. After the fantastic Supercross season that saw Pourcel and Weimer take home the 250 East and 250 West titles, and an exciting outdoor season with standout performances from the entire team, everyone at Traxxas is proud to have been part of your success. And of course, congratulations go to Trey Canard for his incredible comeback and the overall Championship title.