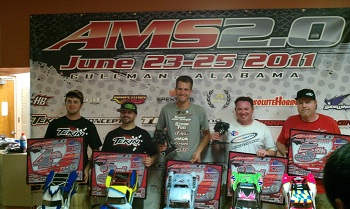 The 2011 Alabama Manufacturer’s Shootout 2.0 was again hosted in Cullman, Al. Tekin team driver Alan Burton was our host for this event. Once again it proved to be a race not to be missed. Top pro drivers from all over the world came to compete against each other in both electric and nitro classes.

Ryan Lutz would prove to be the fastest driver in Pro 4 SCT during practice posting lap times nearly 3 seconds faster than others in the class. Ryan’s Tekin Pro 4 powered Desc410r was simply on fire. Fellow teammates Bobby Gately and Randy Pike would also be near the top spots during practice. Qualifying would be a slightly different as Ryan would have a few electrical issues that turned out to be a bad connection at the battery. Team manager Randy Pike would take Tq honors with his Tekin Sc4x powered Desc410r. Bobby Gately would take the 3rd position with his BCE/Losi Ten SCTe ride also sporting a Tekin Pro 4 motor. 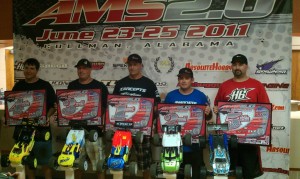