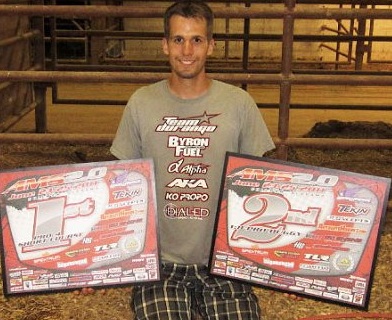 After taking the opening round of qualifying with his DESC410R Ryan was unlucky with wiring problems in rounds 2 & 3 to see him miss out on directly qualifying into the A-Main – however with Bump ups, it was still possible and Ryan didn’t disapoint as he dominated the B-main to go 13th on the grid for the A.
After winning the opening leg of the A-main in dominant style, Ryan didn’t hold back in leg 2 – launching his Tekin powered DESC410R from the line to pass 8 cars over the first jump on his way to take another leg win and with it the overall victory and proving to any doubters that the DESC410R is the fastest 4WD Short Course money can buy.

In pro gas buggy the competition was fierce. The track had a lot of flat landings and was low traction – the guys managed to work out a setup to cope with the conditions and with some changed still to try in the A-Main Ryan managed to put his DNX408 in 5th on the grid for the A-Main. Ryan eventually worked his way through the field up to 2nd behind Ryan Maifield and as the time ran out that’s where things finished and another great result to back up his win in Short Course. 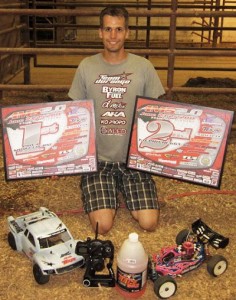