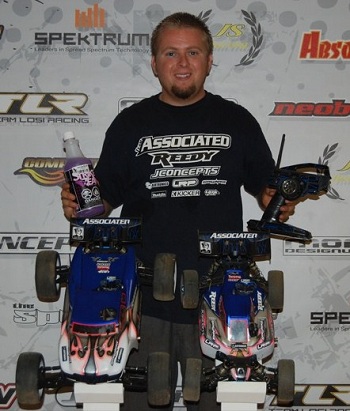 After an amazingly successful 1st annual Alabama Manufacturers Shootout, Alan Burton and crew wasted little time setting up and promoting AMS 2.0. The 2nd annual event was an explosion of talent, competition and enthusiasm which brought together one of the best events in recent memory. JConcepts was once again well represented as an official sponsor of the 2.0 event and had representatives on hand to support the product and race team.

JConcepts drivers, Ryan Maifield, JP Tirronen, Barry Pettit, CJ Weaver, Martin Harrison, Steven Antill, Justin Cranford and Tanner Denney were on top of their games all weekend long in their respective classes putting in solid runs and running at the top of the field. JConcepts / Team Associated driver Ryan Maifield was the fastest of the fast in Pro Buggy and Pro Truggy by TQ’ing 4 out of the 6 rounds of qualifying to take the overall TQ over Hot Bodies ace driver Jesse Robbers.

Long days and long nights were all a part of the special weekend as drivers raced and wrenched into the night, jockeying for A-main positions. Race directors Jimmy Babcock and Nick Black kept the pressure on the racers with a non-stop program which allowed all 460 entries to run a total of 96 qualifying heats on Friday. Saturday morning started bright and early with bump-ups and drivers chasing the dream of an A-final appearance.

The B-mains started with both young JConcepts drivers JP Tirronen and Tanner Denney bumping out of their respective mains for an A-main birth. Congratulations go out to both JP and Tanner for bumping while battling with several accomplished drivers and World Champions alike. The kids were on their way to the A-main.

In one of the first A-mains of the day, another young driver, CJ Weaver, driving his XRay truggy led from start to finish to take the 30 minute Open Truggy A-main in convincing fashion. CJ’s truck was completely decked out with JConcepts Punisher body, Illuzion HD rear wing and the brand new Hybrid tires in green compound mounted on Elevated white wheels.

Pro Truggy A-main was up next and TQ Ryan Maifield pulled a terrific start with Jesse Robbers in tow. The 2 drivers immediately stretched the gap on the field and entered the first pit stop still relatively close. Maifield dropped the hammer, after a quick fuel stop by David Watson and Paul Wynn, and pulled a large lead. Maifield was out front and driving just hard enough to maintain his comfortable, nearly 1-lap lead. Back in the pack, a battle was on between Mark Pavidis, Billy Easton, Josh Wheeler, Mike Truhe and Tanner Denney. Flame-outs and breakage shortened the list and Mark Pavidis emerged in 3rd with a sizeable distance to 2nd and then back to 4th place.

Out front it was still the Maifield show, his RC8T-CE was on rails all main event long and he was pushing it as only he can do. Crossing the finish with a well deserved win Ryan Maifield took 1st with Jesse Robbers in 2nd and Mark Pavidis in 3rd. Ryan’s truggy was covered with JConcepts all weekend long. Punisher body, Illuzion HD rear wing and Hybrids tires in green compound mounted on Elevated wheels finished off the winning package.

The E-Truggy class ran a dual A-main format which meant there were no throw-outs and each finish would count heavily toward the overall position. Martin Harrison and Steve Antill battled in A-1 with each sharing the lead position on several times. On the last lap of A-1, while leading, Steve encountered a mechanical problem which took him out of the lead position handing the last lap and victory to Martin Harrison. A-2 would once again be a battle between Harrison and Antill and this time it was Antill who came away with the win by slim margin of .7 tenths of a second after 10 minutes. Once overalls were tabulated Martin Harrison would be awarded the 1st place with Steven Antill 2nd and Nathan Harrison in 3rd. Both Martin and Steve chose JConcepts all weekend long with Punisher bodies, Illuzion HD and Punisher rear wings and the trusty Sevens and Hybrid tire package for the two drivers were tough to beat all weekend long.

The finale of the weekend was the Pro Buggy A-main. 15 amazing drivers filled the drivers stand and were announced to the crowd who stayed around all day to witness the best of the best. TQ driver Ryan Maifield once again shot out front with Jesse Robbers staying close. Maifield was error free as he entered the first pit stop where Jesse took the lead while Maifield came in to pit. Maifield dropped it into another gear and pulled up on Jesse while it was his turn to pit. In and out of the pits, drivers shuffled, and Maifield stayed on top and pulled a small gap. Jesse got into some traffic which caused him to crash and flameout and gave an incredibly large lead to Maifield so early into the 45 minute main.

Staying on point, Maifield pushed the gap to a lap lead by overtaking 2nd place Ryan Lutz. Lutz fought hard to maintain on the same lap as Maifield and the 2 drivers were 20-30 feet apart for many laps. In the end Maifield pushed the JConcepts equipped RC8B past Lutz and took the one-lap lead and cruised to the finish line. Finishing 1st was Ryan Maifield with Ryan Lutz 2nd and Mike Truhe in 3rd. Maifield’s vehicle was covered with JConcepts all weekend long. Punisher body, Illuzion HD rear wing, Hybrids tires in green compound mounted on the new Inverse buggy wheel topped off the winning ride.

Congratulations to all the winners at this year’s Alabama Manufacturers Shootout. Alan Burton, Jimmy Babcock, Nick Black and the entire AMS staff did an incredible job once again and a huge appreciation goes out to the Cullman arena, dirt and track surface which allows such an amazing event. See you next year.