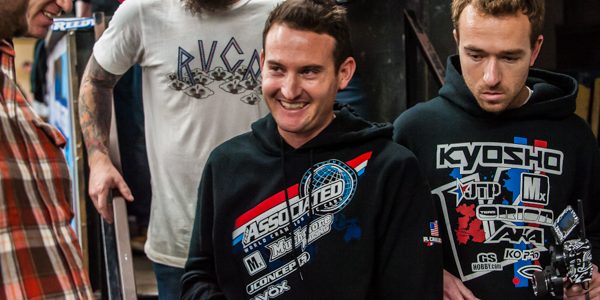 In a conclusion that couldn’t have been written any better, the Ryan show (Ryan Cavalieri and Ryan Maifield) came to a dramatic head in the final race of the event at the 2017 Reedy Race of Champions. With Cavalieri on the front row and Maifield on the second, the crowd was on their toes. Needing a win by either party would mean the overall title only added fuel that was already begun with a spark. Adding to the drama, was AE’s Spencer Rivkin who was also on the front line vying for his own glory and hunt for the final spot on the podium. As the horn went off, the pack got under way and it didn’t take long for Cavalieri to find his way to the front, Maifield chasing in second with Rivkin pursuing in third. But after only a couple of laps of nose to tail racing, Maifield’s buggy didn’t look the same and he was making some rather uncharacteristic mistakes. Then another tumble, and he was sidelined with a broken down YZ-2 buggy. Cavalieri would settle in to cruise control and drive flawless, clinching the win and overall title. When the points were tallied, Team Associated’s Ryan Cavalieri would capture his fourth Reedy Race of Champions title, second went to Yokomo’s Ryan Maifield, and Xray’s Ty Tessmann had enough points to take the third spot, leaving Rivkin in fourth overall. Yokomo’s Ryan Maifield had a one point advantage leading in to the final race, but needed a win to hold off a hard charging Cavalieri for the overall win. Cavalieri, Maifield and Rivkin exit the first corner during the last race.