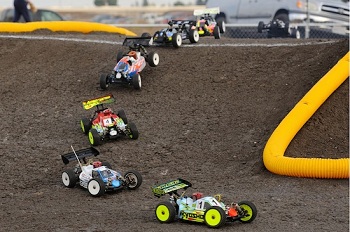 The weekend’s competition was fierce as several manufacturers made their way to the new Silver Dollar RC Raceway for this year’s World’s Warm-Up race. Top drivers from Team Associated, Kyosho, and Hot Bodies and A Main Hobbies seized the opportunity to get familiar with Silver Dollar’s racing surface, enormous drivers stand, stadium lighting and premier facilities. For many, this was their first chance to compete on the newly constructed Silver Dollar track. “It was absolutely amazing,” said Team Associated’s Ryan Maifield. “The track has tons of grip and the driver’s stand is the nicest I’ve ever driven from,” said Kyosho’s Cody King. “We wanted to give the pro racers a facility they look forward to visiting, and local enthusiasts a track they’d be proud of. I believe we accomplished our goals,” says A Main Hobbies owner, Kendall Bennett.

After battling back and forth with seasoned Hot Bodies’ racer and fellow A Main Hobbies’ teammate Tyler Vik, young up and comer, Austin Blair, was able to squeak out the victory in Open Truggy by just a few seconds. “It felt good to get the win, I’m glad I held off Vik who was charging hard at the end of the race, “ said Blair.

Team Associated’s Ryan Maifield dominated the first half of the Pro Buggy race. Maifield would stretch out his lead to over a 10-seconds, but unfortunately for him his tires would not hold up. His car’s traction and lap times began to suffer as the tires became unglued. Kyosho’s Jared Tebo took advantage of Maifield’s misfortunes and was able to overtake Maifield late in the race. “I had a rough start and went to the back of the pack early in the race. Thankfully, I stayed focused and was able to work my way through the field,” said Tebo.

If you like this article, check out this additional article on A Main Hobbies.