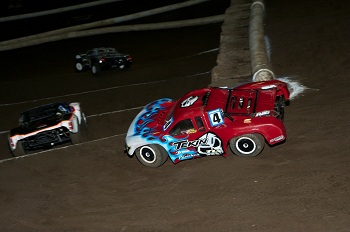 A Main Hobbies’ Outback Raceway presented by Tekin, DE Racing and Panther Tires hosted the 4th Annual Outback Shootout. Racers from all over the west coast converged at A Main Hobbies’ indoor race facility to compete in the racing season’s kick-off classic. With nearly 200 entries, the indoor facility was a buzz as competitors had the opportunity to race alongside A Main Hobbies’ sponsored racers Tyler Vik, Curtis Door, Eric Albano, and Austin Blair. The Sacramento-based BMiller Racing team traveled north to Chico, California and proved that they have one of the region’s fastest satellite teams. With abundant traction that required “smoothies”, nitro-style “bump-ups”, and $5,000 in raffle prizes, racers who attended were ensured of a good time.

The Outback Shootout held classes for all levels of racers and chassis types. Kids took center stage in the rookie class, and one standout teenager made a big impression. BMiller Racing/ProTek RC’s Nathan Bernal showed that at the ripe age of 14 that he is quickly becoming a rising star. The young Bernal won Stock Buggy, finished second in Open/Modified Buggy and third in Open 4WD—Look out for this kid because he’ll only get faster.

Racing on Outback Raceway’s prepped, clay surface is a bonus for racers who typically fret over tire selection—most racers opted to use smoothies instead of treaded tires because there was so much bite. After four rounds of qualifying, racers competed in 8-minute main events with the top two drivers from each lower main advancing. The bump-ups made the lower mains much more exciting, giving life to those who did not fair well in qualifying. The “A” main events were thrilling as many of the races were decided in the closing laps. The only start to finish win was when BMiller/Team C’s Justin Moon led start to finish in the Open 2WD buggy class.

When the Outback Shootout had concluded there were 9 new champions crowned. Each podium finisher in the “A” mains received a ProTek RC radio case with a custom vinyl wrap with the Shootout’s graphics. Dozens of racers went home with new kits, speed controls, servos, bodies, tires and loads of other raffle prizes donated by the Outback Shootout sponsors. “That was an awesome race,” “I had so much fun,” “The track was dialed,” were just some of the comments heard from racers while they were packing up their gear after the Outback Shootout.

If you like this article, check out this additional article on A Main.