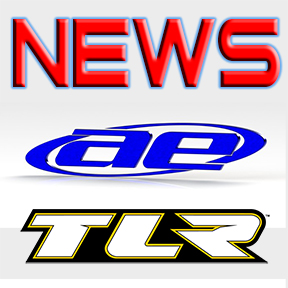 Big shake-ups are on the way in 1/10 buggy racing as RC’s biggest rivals, Associated and Losi (make that Team Losi Racing) have both announced new chassis for the hotly-contested class. Associated is hitting the track with their new Centro conversion for the B4.2, and TLR has refined their 22 platform, now dubbed the 22 2.0.  The new designs will do battle this weekend at the  ROAR 1/10 Nationals in Chico, CA, so we won’t have to wait long for one brand to decree itself the king of the 2WD hill with the US Champion title to back it up.

The A Team’s new Centro C4.2 Mid Motor Conversion moves the B4.2 buggy’s motor to the middle of the chassis for more centralized weight distribution, the preferred setup on high traction surfaces. The kit includes an aluminum chassis, new graphite rear shock tower and bulkhead, and a new 4-gear transmission (the additional gear reverses the transmission’s rotation to compensate for the motor being turned around in the chassis). Associated will also being carrying a lineup of optional tuning parts for the C4.2, including front bulkhead weights, a front brace and carbon chassis stiffeners. 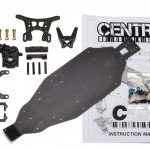 The conversion kit includes everything you see here. 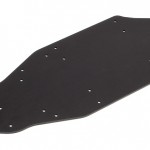 The chassis plate is aluminum and replaces the stock B4.2 chassis with a single plate style design, 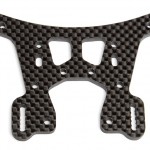 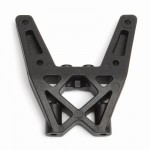 A new rear bulkhead allows the entire rear end to be turned around to put the motor in front of the rear axles. 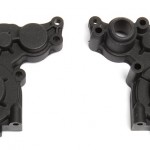 The new 4-gear tranny includes the extra idler gear needed to complete this conversion. This design allows the motor to remain on the same size of the buggy and not need to be reverse rotation. 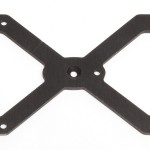 This battery brace holds a saddle pack configuration rather than the B4.2’s standard stick type packs. 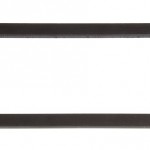 A pair of side plates help hold the batteries in position. 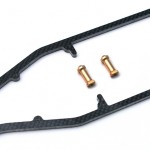 Optional graphite chassis stiffeners will be available along with some other option parts.

The TLR 22 has been revised, revamped and redesigned to become the 22 2.0. The buggy borrows from the former ROAR National Champion and hones the buggy to be easier to drive fast, reports TLR. New suspension geometry, shocks and differential are the most significant improvements, but you’ll also find new titanium carbo-nitride coated shock shafts and hinge pins to keep things moving smooth and improve wear resistance. The shocks now feature bleeder style caps along with new seals and machined pistons for precise damping and smooth travel. 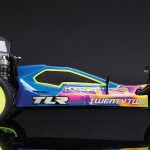 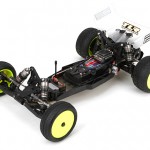 Overall the new 22 2.0 will appear the same as the original buggy however many things have been revised to improve handling. 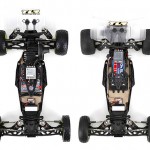 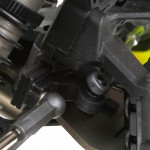 The buggy includes a new steering rack with Ackermann adjustment. 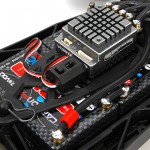 The battery braces seconds as the radio tray. 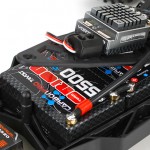 Removing the clip, the battery brace swings out of the way to remove the battery. 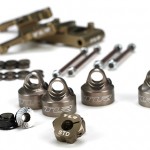 On of the largest revisions for the 2.0 are new bleeder style shock caps and new lower seals along with machine pistons for smooth and consistent damping. 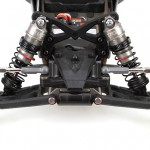 The 22 2.0’s suspension geometry has been revised to make it easier to drive fast.