We are all saddened by the news of Gene Husting’s passing on March 6 at 87 years of age. Few people have have inspired, innovated and driven the RC hobby more than Gene. He was a co-owner of Team Associated, founding father of organized and sanctioned racing, a father and husband.  He was a friend, guide and father figure to many in RC, and everywhere you look you can find something that Gene had his hand in–be it car designs that forever changed the direction of our hobby, organizing racing into what we now know as IFMAR and ROAR, slot cars, full-size dragsters and everything else in between. Gene was an icon in every sense of the word and a true historian and aficionado of this great hobby. He will be missed but never forgotten.

As we mourn Gene’s passing, join us in celebrating his long life and many accomplishments. Here’s a look at just a few of the things that would not have been, were not for a kind and humble man named Gene Husting.

Gene behind the wheel of the long wheelbase dragster he designed, a car that changed drag racing forever.

Long before Gene found his passion for RC, he was a car guy… just like you and me but so much so that everything he did revolved around cars. “He even bought his very first car before he had a driver’s license, sanded it down and gave it the perfect paint job before he was able to drive it!” said his daughter Julie Husting during her introduction speech when he was inducted into the RC Hall Of Fame at the 2006 RCX. Gene’s love affair with cars and racing became his hobby upon returning from service in the Army during World War II as he began racing on drag strips and the dry lakes around Southern California. As an accomplished engine builder and racer, Gene was unbeatable. He designed the first long wheelbase dragster and dominated with it. Two and a half years later drag racing legend “Big Daddy” Don Garlits built a car nearly identical in length to Gene’s. Innovating was in Gene’s blood! 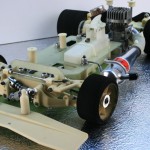 The RC500 was the most revolutionary on-road car of its time featuring a fully independant suspension. 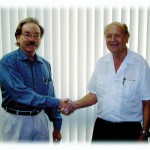 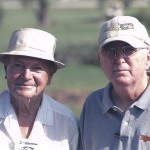 Gene with friend and partner Mike Reedy. Gene, Mike and Roger Curtis are all inductees in the RC Hall Of Fame. 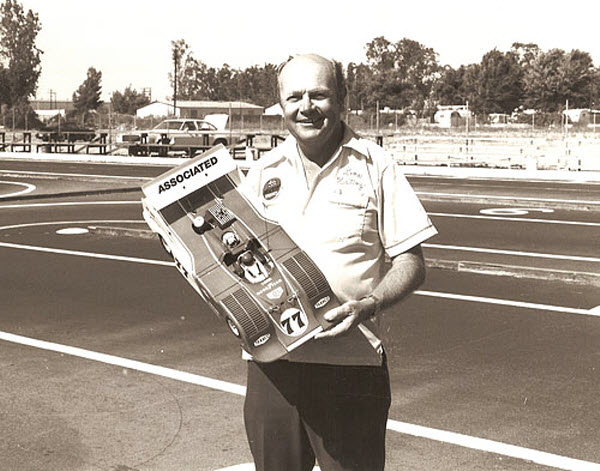 Gene was not only an accomplished RC racer, but designer as well. 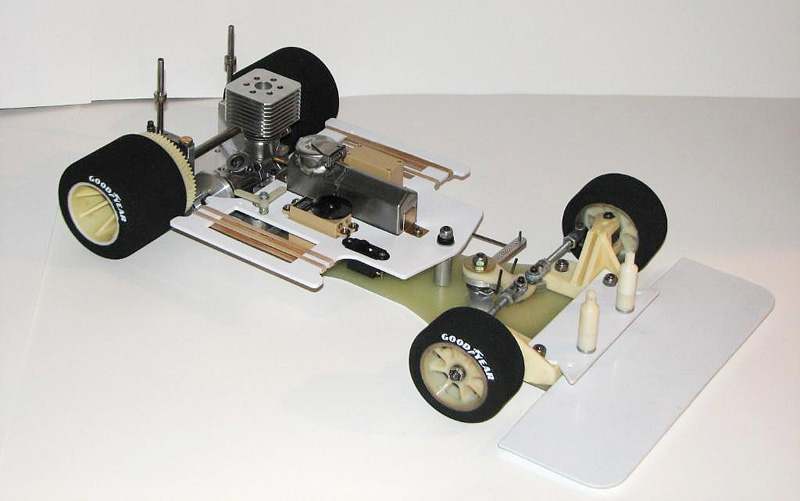 The  RC100 was Gene’s first Associated car design. It went  on to win National and World titles

As he became a father of a large family (three sons and one daughter), Gene began slot car racing. He designed the very first “sidewinder” car, a pivotal innovation in slot car competition. Before entering the world of RC, Gene very well known and influential in the slot car world. Gene’s slot car racing gave way to his discovery of RC and before long it  took over completely. In his slot-racing heyday, he owned a Shell gas station that was frequented by Associated Electrics (now known as Team Associated) owner and fellow racer Roger Curtis. Roger had recently lost his original business partner, and asked if Gene would be interested in joining the company. Gene came aboard and designed the successful RC100 and RC500 nitro on-road cars. an avid racer himself, Gene went on to inspire, support and motivate the team to design such iconic vehicles as the RC12e, RC10, RC10T and RC10GT. Gene was also instrumental in inviting long time friend and partner Mike Reedy to join Associated under their newly formed motor and battery department as well as R&D Engineer and eventual President for Associated, Cliff Lett. 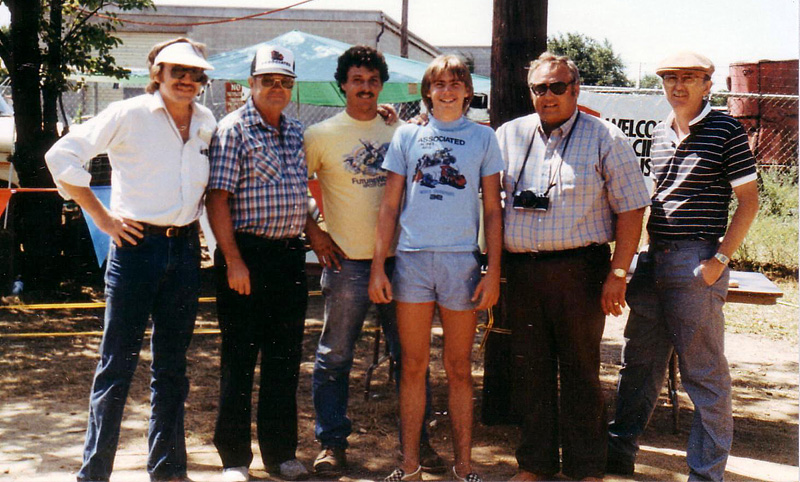 Gene (2nd from left) could often be found at the track and attending races to support his team and cheer them on. In this photo from the mid 80s he can be seen next to co-owner Roger Curtis and with Jay Halsey and his father as well as Mike Reedy.

Gene’s innovations and efforts inspired numerous vehicles and classes, but he is also responsible for aiding in the formation of the global race sanctioning body IFMAR. Through his dedication to RC racing, he served as Vice President of ROAR throughout the 1990s while his wife Midge helped develop and write the ROAR newsletter, RevUP. Gene was instrumental in creating organized, sanctioned RC racing as we know it today. 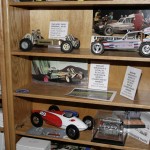 Gene’s home museum is a collection of Team Associated’s history. That’s a prototype RC10 next to the buggy from the famous Jay Halsey ad of the 1990s. 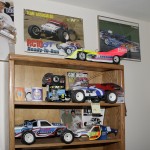 On display are everything from box art vehicles and prototypes to trucks featured in the pages of RC Car Action. 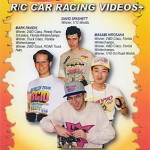 Upon his retirement from Team Associated, Gene compiled his video collection into a series of DVDs that were available on his personal website. 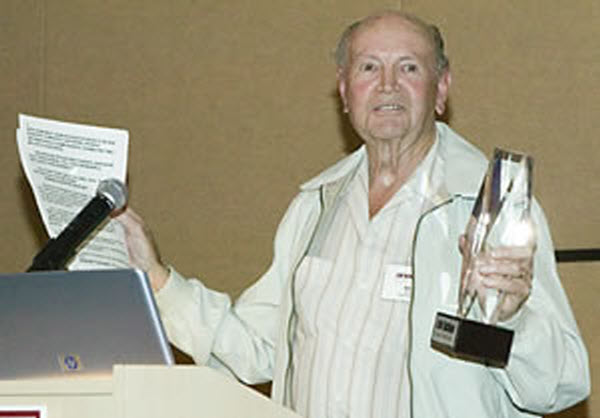 Gene was inducted into the RC Hall of Fame in 2006

Gene will also be forever known as this hobby’s greatest and most dedicated historian. If you ever saw Gene at a race,you could be assured there was a video camera in his hand to document RC history. As a true founding father of RC, Gene recorded nearly every one of  Associated’s many accomplishments on the track as well as the hobby at whole. He complied his extensive collection of videos on to a series of DVDs so we may have a better understanding and appreciation for our hobby. Along with his video collection, Gene built a private museum in his home of all of Associated’s vehicles and successes as well as other people, places and things that inspired him throughout his journey. In his time he also wrote for a hobby magazines and was a guest editor for RC Car Action, happy to lend a hand with anything he was asked of. 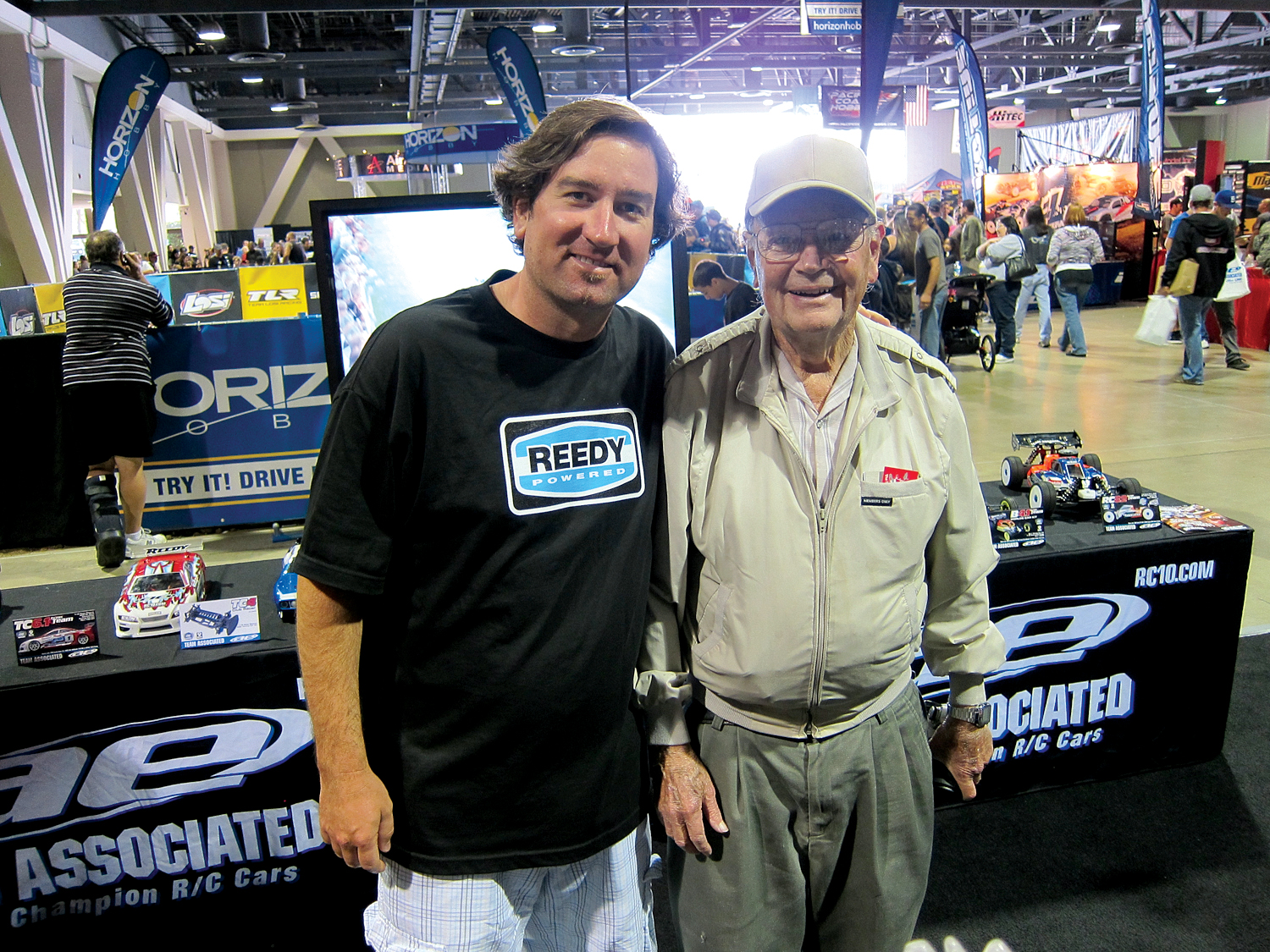 Gene, seen here at RCX 2012 with Richard Saxton, was a fixture at the track as well as trade shows and is responsible for countless pro driver’s careers on the track and in the industry.

In 2006 we inducted Gene into the RC Hall Of Fame. He has also accepted many Readers’ Choice and Editors’ Choice Awards from RC Car Action. Countless numbers of pro drivers cite Gene as having started, supported and spring boarded their racing and professional careers, and cheer him as the type of person that anyone could approach and talk to about their cars. He was always willing to help anyone, no matter what they drove. He will be forever remembered as a friend and father to us all who have been lucky enough to have our lives touched by him.

“We owe so much to Gene as he was a true driving force in the industry and raised the bar for us all. His passion for RC was contagious and he always made time for everyone. Gene was the ultimate car guy and I have many fond memories of him where we just talked about our favorite rides. He will be greatly missed.”–Louis DeFrancesco, RC Car Action Publisher

“Gene was a true industry pioneer who not only helped build the most successful RC racing company in history, he also helped shape the entire hobby.  He brought in so much experience, new ideas, and passion, that its hard not to consider him one of the founding fathers of the industry.  I knew Gene for 29 years, traveled to numerous races with him and, worked under him for 12 of those years.  It was a honor to know him, work alongside him, and I owe so much to him for his confidence in me at Associated.  His legacy will live on in all of us, and we will truly miss him.” –Cliff Lett, Team Associated President