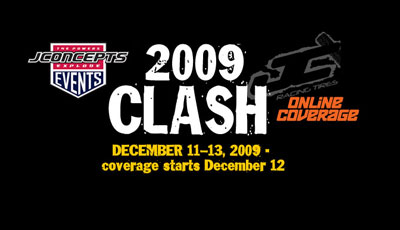 I am in Florida for the 2009 JConcepts Clash and it is happening at the Hurricane R/C Club. The track is located in Lake park and it one of the nicest tracks that I have been to. There are elevation changes and some very challenging jumps and tight turns. The guys ran two qualifiers yesterday and were stuck in the rain for a little while towards the end of the day. The 1/8-scale electric guys ran their second round this morning since batteries and water don’t mix. The track was still a little on the wet side this morning with some decent traction. As the sun came out the track dried up and became very slick. The last two of four rounds were tightened up today because there was a thread of possible rain for the afternoon but we made it thought the day without a of rain. Tomorrow’s weather looks perfect so the mains will be uninterrupted. IFMAR qualifying was used to set the fields for tomorrow’s mains and the electric guys will using triple mains to determine a winner. What makes this even so unique is that there are electric guys running with nitro guys and there are several classes running. Two-wheel buggies, four-wheel drive buggies, two-wheel truck, short course truck, 1/8-scale buggies, and 1/8-scale truggies can be found on the track. The parking lot is full of pit tables and custom rc specific trailers. Some of these guys have air conditioning in their trailers along with beds and showers. They don’t mess around down here in Florida. Pro racers Ryan Maifield, Ryan Cavalieri, JR Mitch, and Jared Tebo are here to put on a show and compete for the win.

I decided to join in the fun and packed up my Team Associated RC8T and shipped it down here. Since I didn’t get to the track until today I didn’t get a lot of track time and missed out on two quals. I ran some quick laps this morning before racing started for the day and it didn’t take me long to get the track layout down. The track was a little on the wet side and I was surprised at how much traction there was in the slick dirt. I figured that it would tighten up as it dried out but I was wrong. I wasn’t under too much pressure since I am pretty much racing to have a little fun while I am here and already missed out on two quals but when I saw that I was going to be racing with Ryan Cavalieri and JR Mitch the pressure began to build a little. Ryan Maifield helped me out by firing up my truck and getting me on the track. I went into turn one and saw very fast just how slick the track had become. My truck quickly slid to the outside of the turn and slammed the wall. I did pretty well during the race even though the truck was a little on the loose side. I was on my way to finishing the race with some good laps and I ran out of fuel before the finish. It turns out that I had a big time leak in the fuel tank. The AE guys got me back up and running and it was time for my next qual before I new it. And holy cow the track was even looser than it was in the morning. It was like driving on ice. I kept my truck on the track but it wasn’t easy and I finished the race with a half tank of fuel left. Well, now I am on to the main tomorrow. I didn’t get a chance to see where I ended up but I think it’s safe to say that I am towards the back of the pack. I’m cleaning up my truck tonight and Maifield and I are going to make changed to my setup. Maybe I can get a little more traction and bump up a few mains. Keep your fingers crossed!

When I wasn’t racing I was out shooting videos and photos. I’m working on them now and should have them up for you to see soon.

NICE JOB KEVIN – Just watched you win the E Main to bump up to the D!

Amazing Kevin did it again. He was leading most of the D main and ended up 2nd bumping up to the C main. Congrats man. (DM)

Thanks guys. Not bad for someone who didn’t get any track time and had no time to wrench. The C main was a hack fest. Couldn’t move up. JConcepts hooked me up with some of thier new tires this morning and they were dialed. Race report coming up soon. I have to let my Outback dinner digest a little. Those wings are so good.

We had perfect weather and great racing all day today. Racing was very close and exciting. Ryan Maifield surprised me by wheeling around an electric buggy. The track grooved up nicely but was still on the slick side. A lot of these guys would do well in the drifting side of the hobby. Again racing was kept moving so that we could get out of the park before closing for the night. The guys at the track did a great job and there were no issues through the weekend. Congratulations to all the winner and I will be posting the results soon.

On the racing side of things, I had a better day at the track. My qualifying position was almost dead last and I didn’t have time to make any tweaks to my setup. Jason of JConcepts hooked me up with a different set of tires and my truck was hooked up. I easily took over first place in the E Main and pulled away from the rest of the guys. I bumped into the D Main and again made my way up front. I bounced from first to second a few times and almost didn’t make the bump. I ended up in second and made my way into the C Main where things were a little rough at the start and I was never able to get my way though traffic to make my way up front. I finished in 7th place. Not too bad.