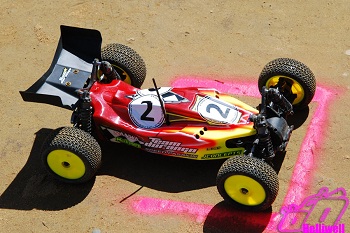 Jörn Neumann put in a great performance at this years electric off road Europea Championships to overcome the disappointment of finishing 2nd at the World Championships – battling against some of the top drivers in the world and taking the 2011 European Championships on the dirt track at Pau, Southern France. Qualifying 2nd overall in the shortened schedule after heavy rain washed out the previous day, Jörn lead the Team Durango charge, with team mates Hupo Hönigl qualifying right behind in 3rd and Martin Kreil 9th. The field was strong, with two former/current World Champions and 6 former/current European Champions in the A. Jörn took the opening two legs of the A-Final to take the overall win in a close fought battle with Lee Martin and Neil Cragg and become the 2011 4WD European Champion.

Having already won the title, Jörn sat out the third leg of the A and Hupo took up the fight – taking second which he held to the line for 4th overall, with Martin Kreil finishing 8th overall.

Jörn won the title in 2004 driving a prototype Durango – hand built by Gerd Strenge – at the tender age of just 13. Another great result for Team Durango after a very sucessful year – proving again that the DEX410 is the 4WD to beat.

Congratulations to Jörn on his spectacular performance! We’ll have more details and setups available as soon as possible.

We also had a good showing at the 2011 EFRA European Championships with our 2WD DEX210 buggy. Read our race report about that event here: