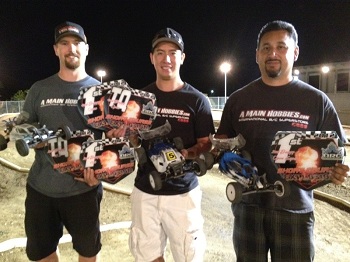 Five members of the BMiller Racing team (http://bmillerracing.com) made the short trek to Delta RC Raceway in Antioch, California for the 3rd Annual Short Course Explosion and came away seven podium finishes, highlighted by a sweep of the three expert buggy classes. Eddie Bernal won 2wd Open Expert Buggy while Terry Wickum was first in 17.5 NR Buggy and Patrick Zhao finished on top of the box in 4wd Mod Buggy. All three BMiller Racing drivers were powered by ProTek batteries from A Main Hobbies (https://www.amainhobbies.com).

Bernal started fifth on the grid for the eight-minute A main in expert buggy but worked his B4.1 Worlds Factory Team Associated up to third after three laps. Laying down four consecutive 18-second laps, Bernal shortly thereafter moved into second and then first on lap 12. From there he never looked back and took down the top spot by a little more than 10 seconds with the only 27-lap run. Bernal also finished second in SCT Open Expert behind Team Losi driver Phillip Atondo.

Wickum has been on fire all summer in 17.5 buggy, and the Short Course Explosion added to his resume. Piloting his Associated B4 with soft Panther Lynx 2 ribs on the front and soft Panther Raptors in the rear (http://panthertires.com/store) and DE Racing black Borrego wheels all around (http://deracing.net), Wickum was absolutely dialed in the main. Starting in the TQ position for the eight-minute main, he won by nearly two laps over the rest of the field and posted a 26-lap run that would have finished in the top five in the 2wd expert open main.

Zhao just recently took up 4wd buggy but has found the transition pretty easy after running 4wd SCT for the past year. Earning the TQ with his Associated B44.1, Zhao took home a close win with a 27-lap run driving on Panther super soft Raptors on the front and Panther super soft Rattlers in the rear with white DE Racing Borrego wheels on each corner.

Zhao also took home first place and the $100 winner-take-all cash prize in the Delta Derby, teaming with local standout Dennis Close in a five-minute, 20-car short course shootout, featuring 10 teams of two drivers each racing with no corner marshals. Zhao was the only driver to complete 16 laps and Close registered 15 laps to come away with a two-man total of 31.

The other two BMiller Racing podium finishes came from a second place showing by Troy Hanson in 4wd Intermediate SCT and a third place from Justin Moon in 4wd buggy.

If you like this article, check out this additional article on BMiller Racing.