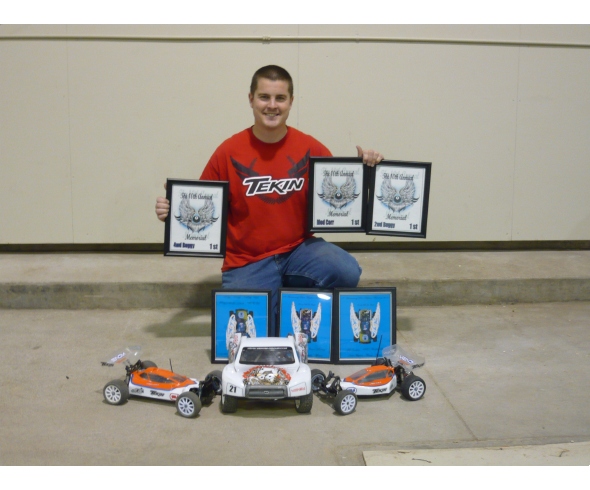 In the Mod 2wd Buggy class Jesse ran an RC10B4 and TQ’d all four rounds of qualifying, won the first 2 mains on Sunday and didn’t have to run the third main. Jesse ran Flipouts in qualifying and the first main. The track was getting more and more grooved up all weekend and he switched to Blue Barcodes in the 2nd main.

For the Mod 4wd Buggy class Jesse ran an RC10B44 and TQ’d 3 out of 4 rounds of qualifying and won both the second and third A-Mains after a 2nd place finish in the first main to take the victory. Jesse ran Green Double Dees front and rear all weekend. Jesse stated “The Double Dees seem to be the best tire for my RC10B44 every race”.

In Mod Shortcourse Jesse ran a prototype Venom Gambler and TQ’d 3 out of 4 rounds of qualifying. He also took the overall win after a 2nd place in A-Main #1 and a win in Main #2. Jesse ran Green Goosebumps in qualifying and switched to the new Green SC Barcodes once the track grooved up.

Congratulations to Jesse on these three wins!