“How fast does it go?” It’s the number-one question you hear anytime someone sees RC in action, and we’re all fascinated by speed—the more, the better. And when it comes to going fast, one man stands out as RC’s most prominent over-achiever, recognized by the Guinness Book of World Records, no less. That man is Nic Case. He’s the builder and driver of the world’s fastest RC car, the 202mph RC Bullet. We’re pleased to have Nic himself tell us the story of his record-breaking journey, and what it takes to push an RC car past 200mph. 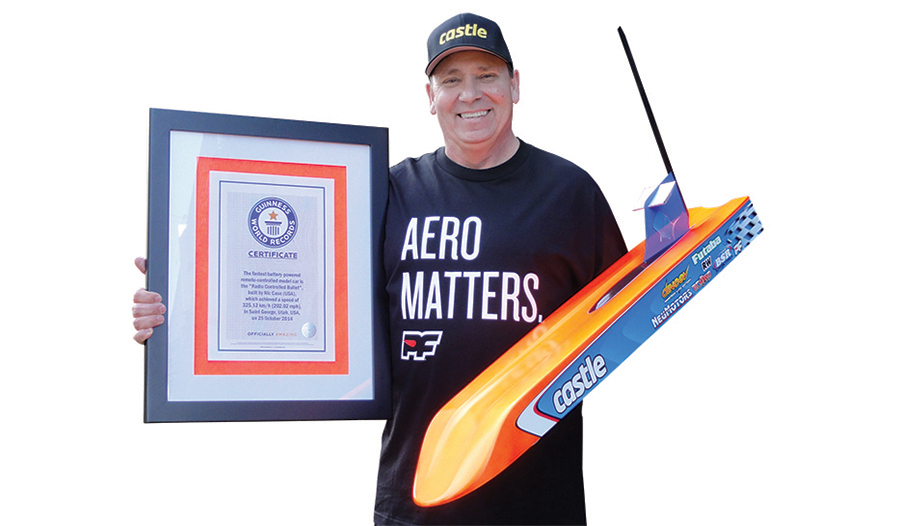 Nic shows off his official Guinness Book of World Records certification as the driver of the World’s Fastest RC Car.

HOW IT ALL BEGAN
My family actually got me into RC back in 1990. Raced my first RC car (a gold pan RC10) at Fast Lane (now Hot Rod Hobbies) and I was hooked. My first big Win was at the 1991 Thunderdrome in Encino CA. It was there I witnessed the Insane Speed run—pretty much the coolest thing I had ever seen in RC. After seeing that, I was hooked on going very fast! Fast forward to 2006, to RCCA’s World’s Fastest RC Car Competition in Fontana CA , that launched my focus on straight-line speed running.

INSIDE THE BULLET
The Bullet’s design came mostly came from several brainstorming sessions with my good friend John Trino. We agreed to keep the streamliner design layout, but completely eliminate the suspension. By doing this, it would prevent the car from squatting in the rear under acceleration and preventing a blow- over. Another added benefit of no suspension, was the elimination of the CVD, which was a weak point on previous versions. I decided to go with belts instead of a shaft-drive, because it was easier to find a reduction ratio that was close to 1.5 : 1. The Bullet’s chassis, drivetrain and several bodies were all designed via CAD in my spare time. 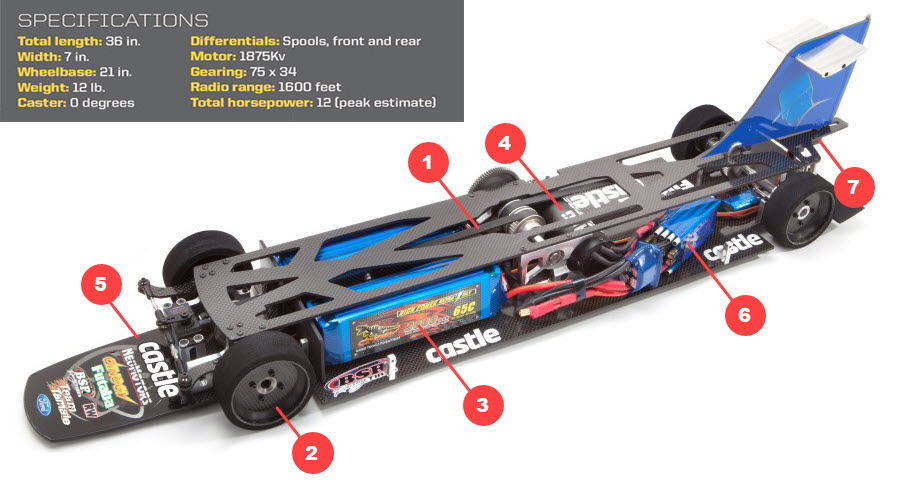 1. Industrial Drive Belts
The Bullet’s 6mm and 8mm drive belts are typically used for small machinery. I could get these in many different lengths, and generally opted for a bit of overkill on width.

2. Custom Carbon-Fiber Wheels
Tires and wheels are an area I put considerable effort into, since they have to spin at roughly 23,000 RPM during a 200+mph run. I tried all kinds of combinations of materials, adhesives and processes. I use a common purple foam from John’s BSR tires, expertly glued by John Foister himself. The 3 inch diameter tire is on a custom made carbon wheel that I fabricated one at a time. The weight to strength ratio is superior, and the carbon wheels do not have the negatives of aluminum. 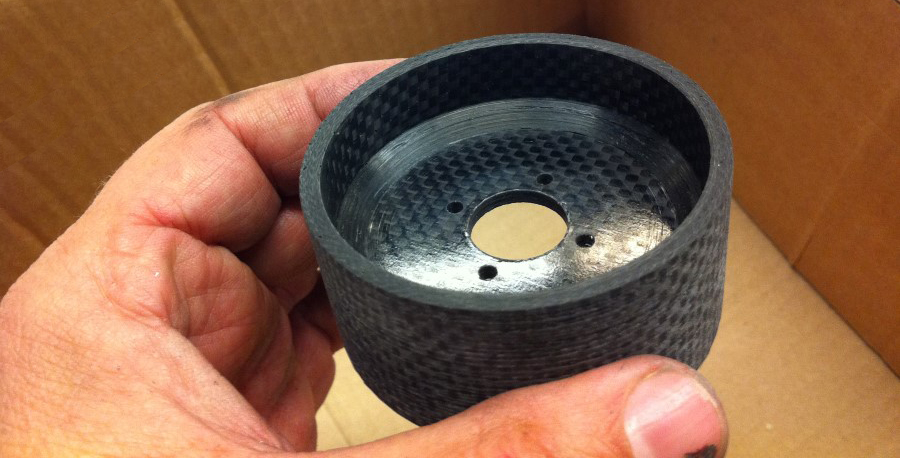 The wheels are constructed of rigid carbon fiber to run true at more than 20,000rpm.

3. Dinogy Lithium Batteries
With some research, I found the Dinogy batteries put out more watts that any other battery. When I changed to Dinogy packs, I went from 171mph to 184mph! I used twelve 5000mah cells in series to deliver the needed horsepower.

4. Neu Motor
I believe these motors where intended for RC planes and helicopters, but I adapted them for use in my cars. Neu motors are powerful and efficient, these motors never reached anything over 150°F. I believe that many records have been set with a Neu motor in it.

5. Carbon-Fiber Chassis
At 12 pounds ready to go, the Bullet requires a very stiff chassis. High-quality 3mm carbon fiber was used for all pieces. Kinetic Composites cut all the carbon fiber; the aluminum parts were cut by Team Tamale; and the front axle and hubs were machined by John Foister at BSR. 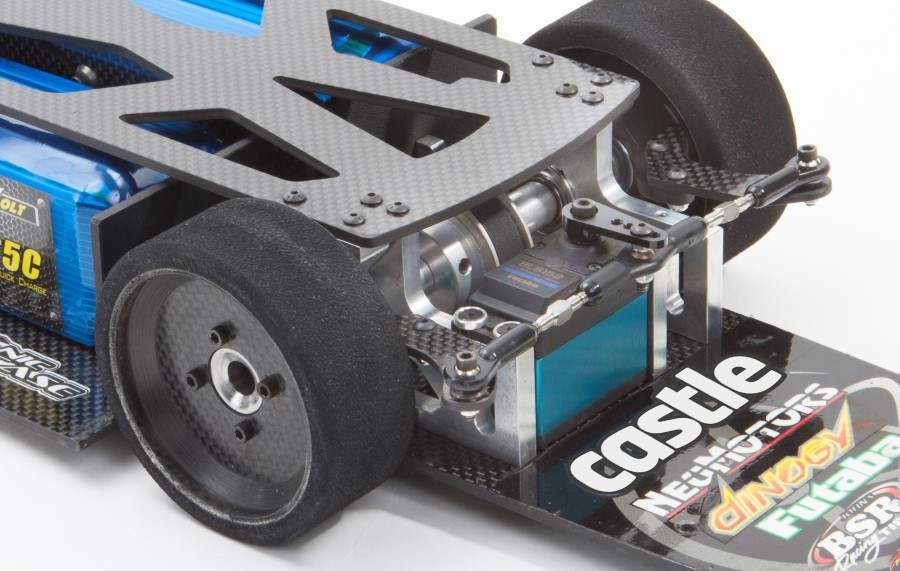 The steering system is very simple, all the better for reliability and precision. The Futaba BLS152 servo provides 430 oz.-in. of torque to keep the Bullet on course.

6. Castle Creations Power System (off the shelf, with a twist)
The Bullet’s Electronic Speed Control is a Castle Hydra HV 240 with a Phoenix HV 110 Control board. Since this is an older version, it has no data logger. I protected it from current ripple with a large capacitor bank. I’ve also used Castle’s Phoenix HV 140s with great success. 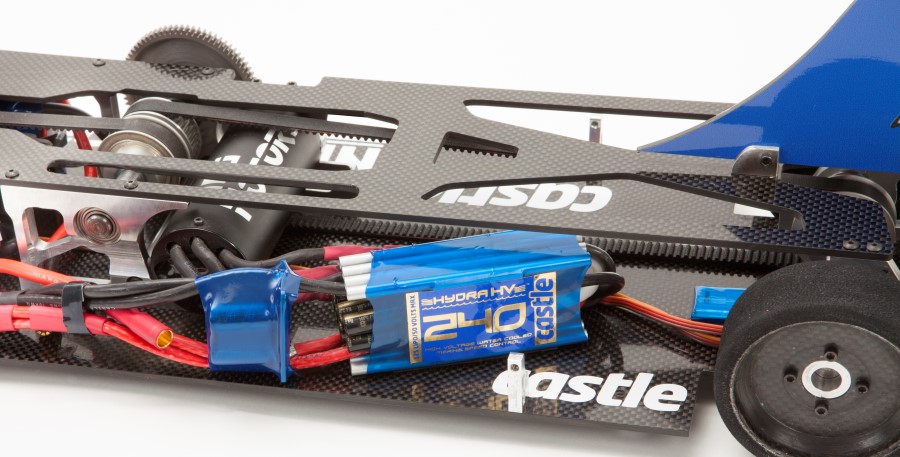 7. Futaba 4PK Transmitter and FASST R614FF Receiver
I added a 400mm boat antenna to the receiver, which threads up the back of the tail fin, to ensure that it’s as far from the ground as possible.

Full-Carbon Body
The carbon fiber body was originally made by carving it out of modeling clay. Only two bodies where ever run on the Bullet – Version 26 & Version 19. With the help of CD Adapco, I used a virtual wind tunnel to get educated on the drag-to-downforce relationship. It is a scientific tool that helped confirm if my visualization was headed in the right direction. Several of my designs had too much drag or not enough downforce.

Virtual wind-tunnel testing guided the Bullet’s design, which was first modeled in clay. 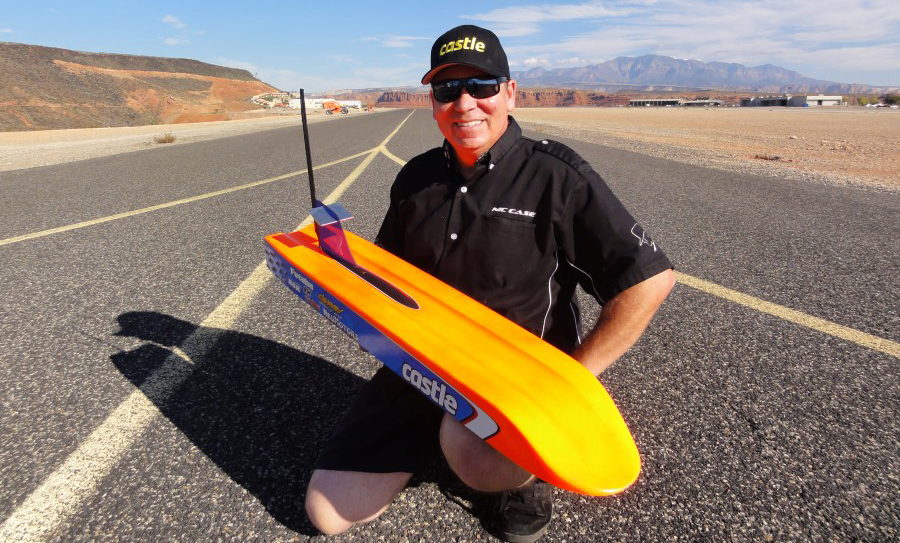 DRIVING A 200MPH RC CAR
Driving the Bullet is huge responsibility; you have to make sure you are going confidently straight before unleashing the massive power. It’s important to be willing to abort in an instant – Safety is paramount. Driving the Bullet is an awesome experience, the acceleration is very impressive. It responds in a predictable way when steering and decelerates hard and confidently. The importance of deceleration is often overlooked in designing a speed-run car.

Mission Accomplished
On October 25th, 2014, at St. George Utha, My wife Tracy, step Dad Mak, and good friend Josh, were there to support and witness the R/C Bullet achieve 202mph. Not bad for an amateur hobbyist. With good friends, family, great sponsors and off-the-shelf electronics, we set a new world record and broke the 200mph barrier. There were many people that helped throughout this journey. I appreciate everyone’s support immensely. For now, I consider myself retired from straight—line speed running. Someone will break this record, and I’ve always been at peace with that. Driving an Insane Speed run car on the Velodrome is the future for me, along with having some fun racing dirt oval at my adopted home track ,Hot Rod Hobbies.