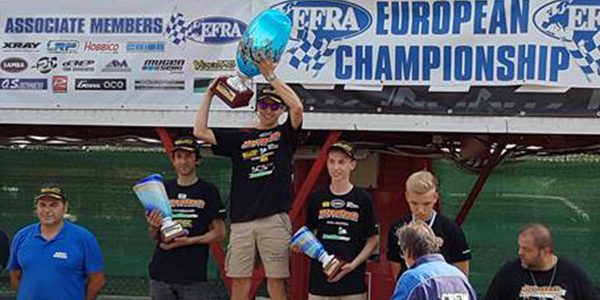 Large scale on-road touring car racing is impressive and combines a bit of scale realism other classes just can’t match. At this year’s 1/5-scale European Touring Car Championship in Bologna, Italy, it was Belgium’s Giovanni Verbrugghe who took the title after an exciting change in the lead late in the race. With track conditions rapidly evolving due to big changes in temperature as the sun came out, replacing the rain seen in the morning, racers were fortunate to get dry track as the final started. After taking second place from a fast-starting Ales Bayer, Verbrugghe remained three to five seconds back from nine-time IFMAR 1/8-scale on-road World Champion Lamberto Collari, who led much of the race after pole-sitter Patrick Folman fell back thanks to several mistakes that saw him in the grass. Collari, whom the Bologna venue is named after, remained in control until the dying seconds of the thirty-minute race, when he spun out trying to save fuel and negotiate traffic. This handed the win to Verbrugghe, winning by just over two seconds from the recovering Collari. Patrick Folman recovered from his early transgressions to take third, followed by Costantino Marrone, who also briefly led in the first half of the race.