Come the July issue, we’ll count up your votes for the Readers’ Choice awards. But this month, it’s our turn, as the editors of Radio Control Car Action consider all the products we’ve reviewed in the last 12 issues to arrive at our selections for just three awards: Car of the Year, Truck of the Year, and Innovation of the Year. Unlike the Readers’ Choice awards, which places no restrictions on whether or not you’ve experienced what you’re voting for, the only products eligible for an Editors’ Choice award are those we have actually featured within the pages of RC Car Action. We cover a lot of gear in the 700+ pages of RC Car Action we produce each year (that’s just the articles, not the ads!), so it’s a very big deal for any product to emerge as one of our top choices. We’re all lucky the RC industry releases so much great gear every year, but these are the three items that we feel deserve to be singled out as the most important items in RC for 2016. 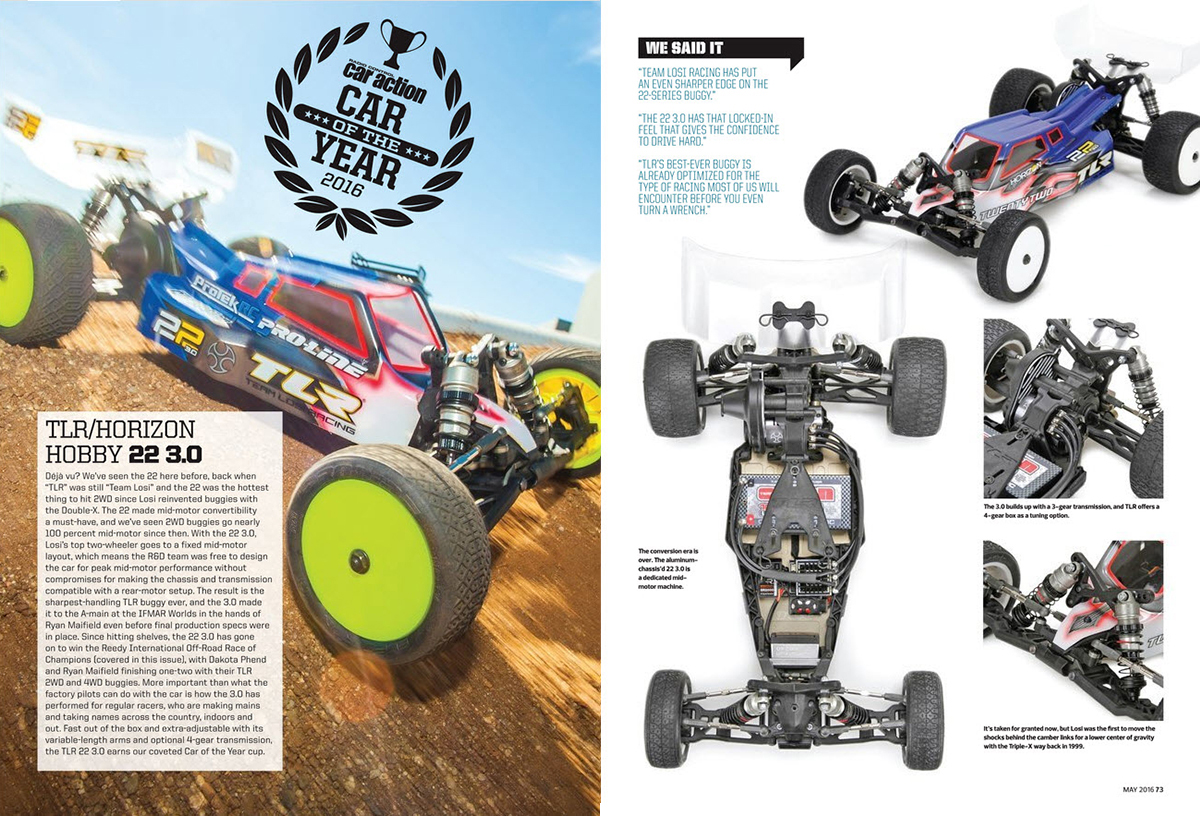 Déjà vu? We’ve seen the 22 here before, back when “TLR” was still “Team Losi” and the 22 was the hottest thing to hit 2WD since Losi reinvented buggies with the Double-X. The 22 made mid-motor convertibility a must-have, and we’ve seen 2WD buggies go nearly 100 percent mid-motor since then. With the 22 3.0, Losi’s top two-wheeler goes to a fixed mid-motor layout, which means the R&D team was free to design the car for peak mid-motor performance without compromises for making the chassis and transmission compatible with a rear-motor setup. The result is the sharpest-handling TLR buggy ever, and the 3.0 made it to the A-main at the IFMAR Worlds in the hands of Ryan Maifield even before final production specs were in place. Since hitting shelves, the 22 3.0 has gone on to win the Reedy International Off-Road Race of Champions (covered in this issue), with Dakota Phend and Ryan Maifield finishing one-two with their TLR 2WD and 4WD buggies. More important than what the factory pilots can do with the car is how the 3.0 has performed for regular racers, who are making mains and taking names across the country, indoors and out. Fast out of the box and extra-adjustable with its variable-length arms and optional 4-gear transmission, the TLR 22 3.0 earns our coveted Car of the Year cup. 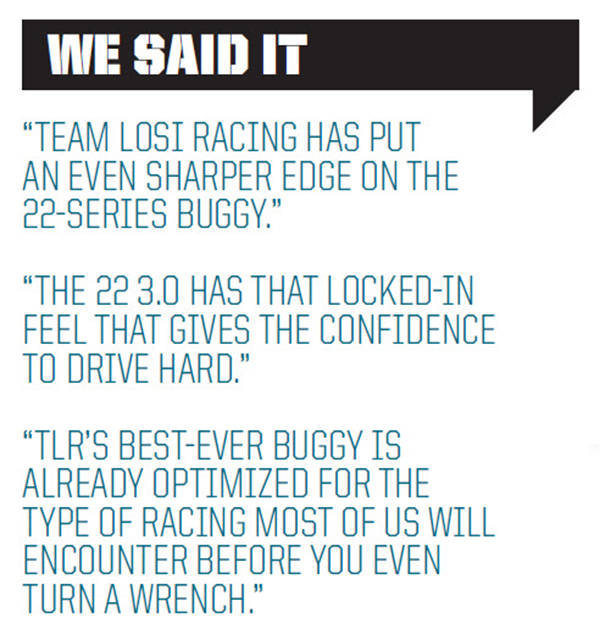 TRUCK OF THE YEAR
TRAXXAS X-MAXX 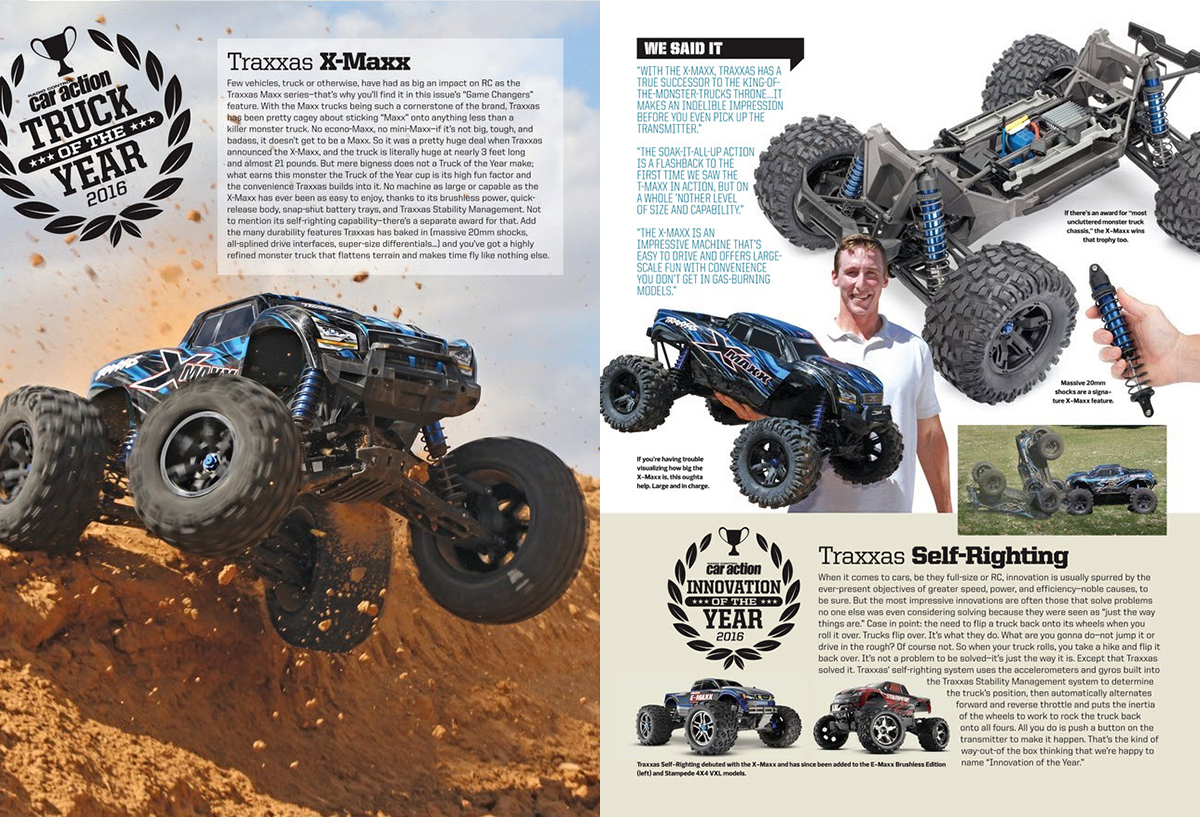 Few vehicles, truck or otherwise, have had as big an impact on RC as the Traxxas Maxx series—that’s why you’ll find it in this issue’s “Game Changers” feature. With the Maxx trucks being such a cornerstone of the brand, Traxxas has been pretty cagey about sticking “Maxx” onto anything less than a killer monster truck. No econoMaxx, no miniMaxx— if it’s not big, tough, and badass, it doesn’t get to be a Maxx. So it was a pretty huge deal when Traxxas announced the XMaxx, and the truck is literally huge at nearly 3 feet long and almost 21 pounds. But mere bigness does not a Truck of the Year make; what earns this monster the Truck of the Year cup is its high fun factor and the convenience Traxxas builds into it. No machine as large or capable as the XMaxx has ever been as easy to enjoy, thanks to its brushless power, quickrelease body, snapshut battery trays, and Traxxas Stability Management. Not to mention its selfrighting capability—there’s a separate award for that. Add the many durability features Traxxas has baked in (massive 20mm shocks, allsplined drive interfaces, supersize differentials…) and you’ve got a highly refined monster truck that flattens terrain and makes time fly like nothing else 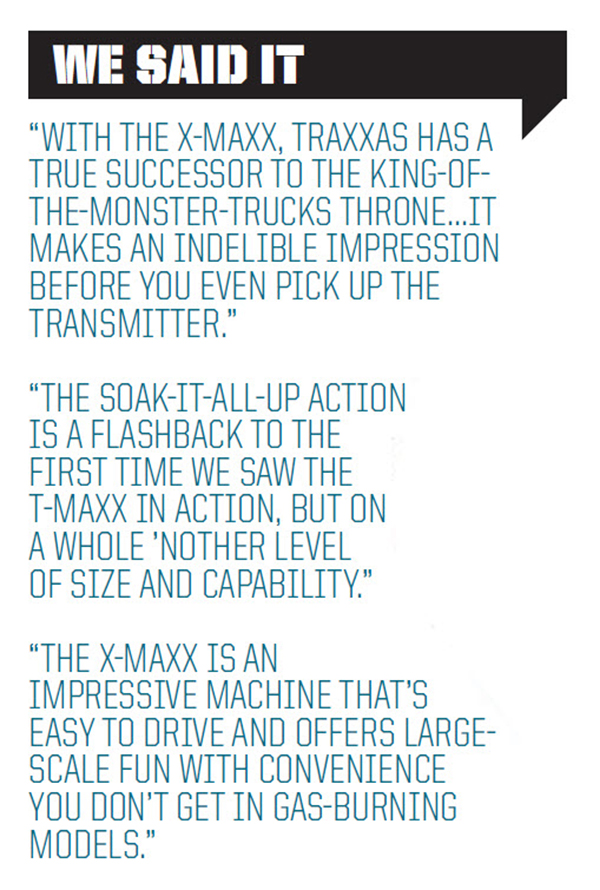 INNOVATION OF THE YEAR
TRAXXAS SELF-RIGHTING
When it comes to cars, be they full-size or RC, innovation is usually spurred by the ever-present objectives of greater speed, power, and efficiency—noble causes, to be sure. But the most impressive innovations are often those that solve problems no one else was even considering solving because they were seen as “just the way things are.” Case in point: the need to flip a truck back onto its wheels when you roll it over. Trucks flip over. It’s what they do. What are you gonna do—not jump it or drive in the rough? Of course not. So when your truck rolls, you take a hike and flip it back over. It’s not a problem to be solved—it’s just the way it is. Except that Traxxas solved it. Traxxas’ self-righting system uses the accelerometers and gyros built into the Traxxas Stability Management system to determine the truck’s position, then automatically alternates forward and reverse throttle and puts the inertia of the wheels to work to rock the truck back onto all fours. All you do is push a button on the transmitter to make it happen. That’s the kind of way-out-of the box thinking that we’re happy to name “Innovation of the Year.”