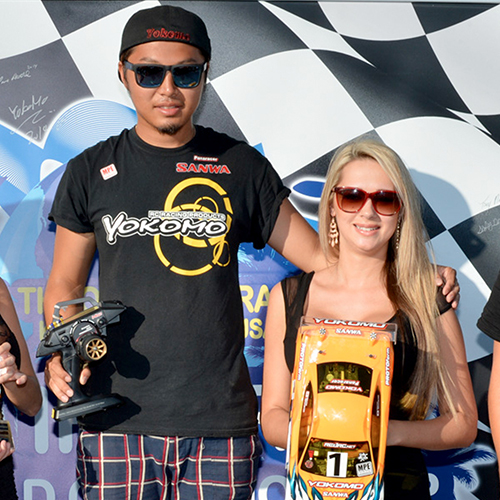 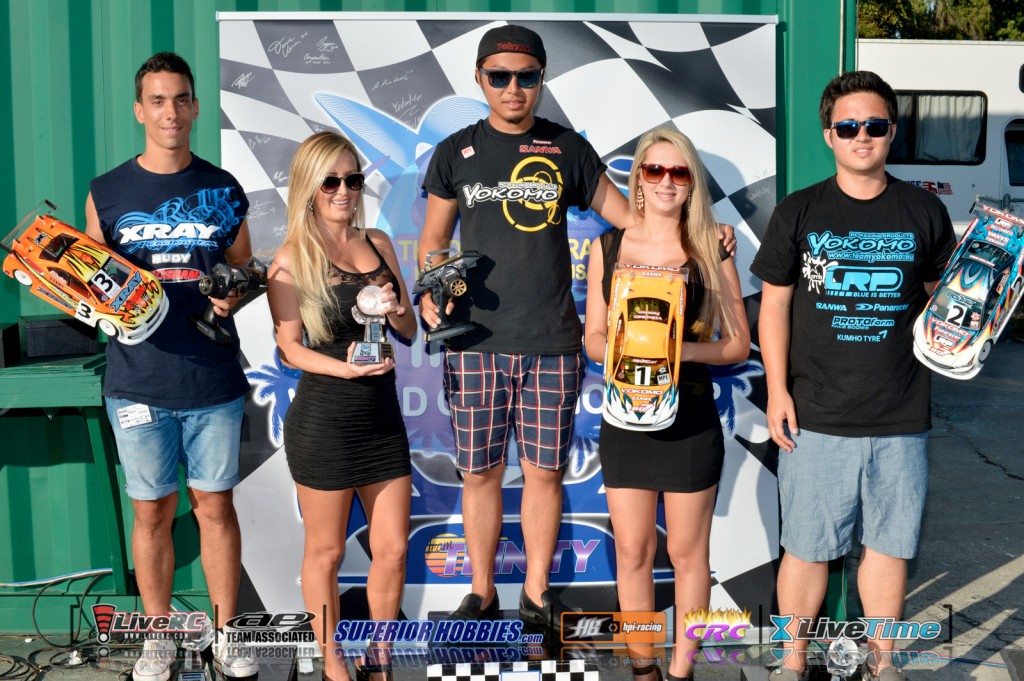 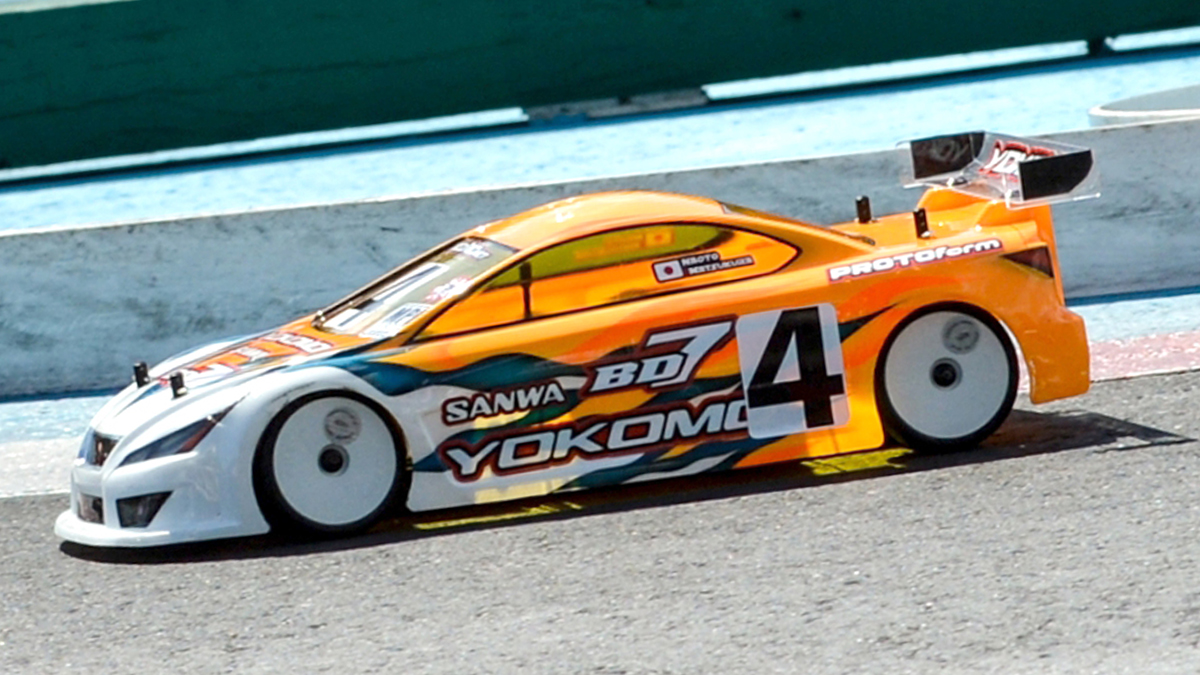 Naoto Matsukura’s Yokomo BD7 on the way to the win. Photo courtesy LiveRC.com

The 2014 IFMAR Electric On-Road World Championships wrapped up this weekend with 1/12 scale pan cars racing on carpet in the Minnreg R/C Club in Largo earlier in the week and then touring cars on the outdoor asphalt track of Full Throttle Raceway in Kissimmee later on. Naoto Matsukura showed his flexibility and talent by piloting his Yokomo BD7 equipped with Yokomo electronics to the top of the podium of the 2014 IFMAR World Championships in the touring car division in the hot Florida sun. The Japanese driver and Top Qualifier, known more for his 1/12 scale pan car abilities, would hold off team-mate and pre-event favorite Ronald Volker in the final A3 main to win his first Touring Car World Title. The exciting touring car event saw four drivers line up for the third A-Main who had a chance at the title. As the last race got under way, both Matsukura and Volker would go head-to-head as they slowly put a gap on the field. On lap eight, Matsukura would hit a board that caused a collision between the pair, but it was Volker who saw the worst of it. The contact sent Volker back almost a second behind Matsukura. As the race drew closer to the end, Volker mounted another attack after getting by the impressive new XRAY star Bruno Coelho, but wasn’t able to make the final deciding pass. This would leave Matsukura on the front and in position to claim the World Title. Coelho would then take the second spot overall by way of a tie-breaker by points with Volker ending up in the third spot. 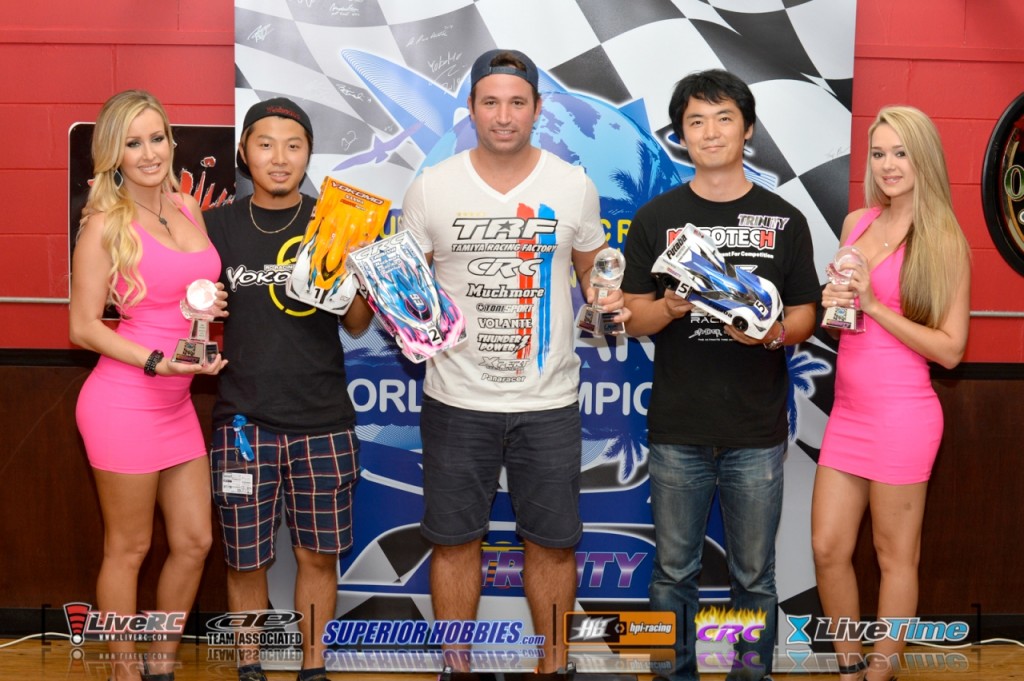 Rheinard would drive his CRC pan car for the win in convincing fashion.

At the 1/12 scale portion of the event held earlier in the week indoors on carpet, it was Marc Rheinard who would drive his CRC pan car equipped with MuchMore motor and speed control and Thunder Power battery to the win by taking the first two mains. Starting from his second qualifying spot, the German ace would have to get around 3-time IFMAR 1/12 scale Champion Naoto Matsukura who was on form and had established TQ with his Yokomo. It was Rheinard’s first 1/12 scale IFMAR Title and something he had long tried to attain. Having broke his 3-time winning streak by Rheinard, Matsukura would go on to take A3 and second overall. The third place overall would be capped off by Hideo Kitazawa from Japan and his Morotech car powered by Trinity and Advanced Electronics.

For all the action from the ISTC and 1/12 Worlds, go to LiveRC.com