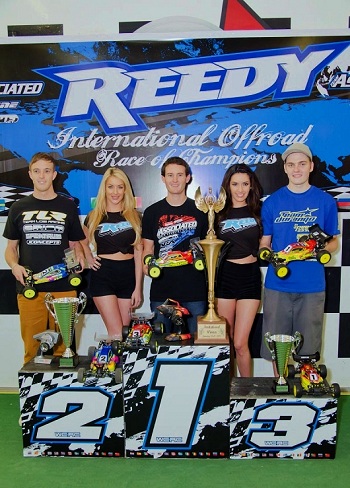 A spectacular weekend of racing is in the books at West Coast RC Raceway following a full day of heads-up competition; Sunday’s calendar called for the upper main events for the Open classes and final four rounds of 4WD Invitational, crowning the champions for all three classes and marking those names in the history books.

The Open classes started off with a bang, as Team Durango youngster Carson Wernimont stalked TQ Rob Gillespie for the opening laps of the first 2WD main event. The two swapped positions twice in the first five laps before a small bobble by Rob gave Carson the lead on lap six. Never more than a couple of seconds apart, the two settled into a rhythm for the 10-minute main event as they were content to not only wait for the later stages, but also maintain their gap over a charging Andy DiBrino who climbed up from the 6th spot on the grid. Gillespie poured on the pressure over the final few laps, logging the fastest lap of the race on the final lap to set up a drag race to the finish line. Wernimont took the win in a photo finish, crossing the strip just one tenth of a second ahead.

Gillespie used his TQ starting position to its fullest advantage in the first 4WD Open main; it was all the breathing room he needed, clicking off 32 perfect laps to take the win by 1.5 seconds over Wernimont and the rest of the field. Fourth qualifier Max Flurer capitalized on an early mistake from Gunnar Rieck, who started ahead of him, and held off the hard-charging Chris Jarosz (who bumped up from the B-Main) by less than a second to round out the top three.

A crash on the second lap of A2 dropped TQ Gillespie to the back of the field, which had been mixed up as though the cars had been thrown into a blender. Andy Dibrino launched from the outside of row three to climb to third by the end of the first lap, and then grabbed the lead after Gillespie’s crash, which blocked Wernimont from getting by. Wernimont needed less than two laps to make the pass and cruised through the rest of the race to seal the championship, and his ticket to next year’s Invitational class, with a gigantic six-second margin. Frank Root made good on his third-place starting spot and never moved backward, following Wernimont through the early wreckage and grabbing a second place finish by a half-second bump-up Christian Toic to greatly improve his overall placement. Gillespie rebounded to finish fourth after dicing with Dibrino for the last half of the race, a decisive back-and-forth battle that determined the final spots on the podium. 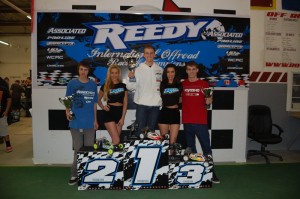 Just as he did in the first round, Rob Gillespie carried the lead through the first corner of A2 and left the field in his wake of hard-packed clay to march toward the 2014 Invitational. A crazy first lap behind him kicked second qualifier, and newly crowned 2WD champ, Wernimont back to 4th behind Rieck and NorCal native Brian Strange, who rocketed from row three in the opening laps. Strange, Rieck, and Wernimont battled for the first few minutes while the field settled into position, eventually promoting Wernimont back to second position. Rieck and Strange dropped back into the pack as the race wore on, with the biggest surprise coming from WCRC local Kevin Motter – he moved from 8th on the grid to 4th. 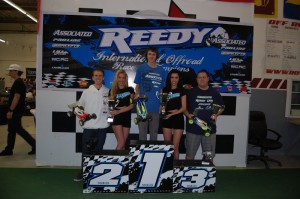 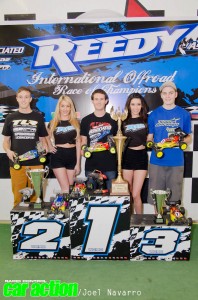 Through Sunday’s four rounds of 4WD racing, the Invitational class quickly narrowed down to a two-man race between 2009 champion Ryan Cavalieri and 2011 winner Dustin Evans. With all of the drivers in the heads-up format citing elimination of unforced errors as the key to winning the race, Cavalieri and Evans went point-for-point through today’s four rounds with Evans making up the one-point differential he carried from yesterday’s split 2WD/4WD rounds. Evans won his final round to put the pressure on Cavalieri, who capitalized on a late-race mistake by Ty Tessman in his final race to move into the position he needed to grab the overall victory. The two drivers finished tied on points after 12 rounds of competition, with Cavalieri taking his second Reedy Race championship, and first at his home track, by virtue of the tiebreaker – most round wins: Cavalieri had six, Evans had four. Defending champion Jorn Neumann’s strong performance in the 4WD rounds earned him the final spot on the podium.

And then they popped the bubbly. 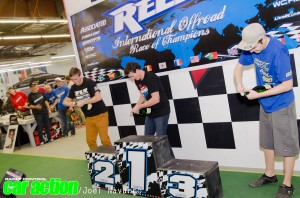 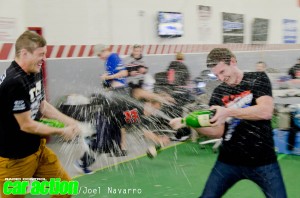 Stay tuned to RCCarAction.com this week for extended photo galleries and interviews from the pits!