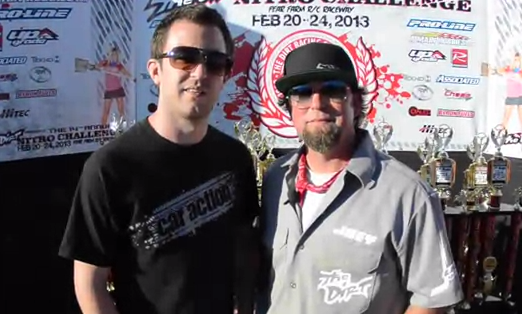 It’s the final day of the 2013 Nitro Challenge and last night was an amazing Pro Truck main event, with reigning champion Ty Tessman winning for the second year in a row. Earlier in yesterday’s program we caught up with two of the drivers who bumped up from the B-Main event, and both have some interesting stories: Taylor Petersen made his big race debut this weekend with new sponsor XRAY, and with very limited practice with his new cars was able to put his XT8 into last night’s 45-minute final. We also chatted with Arizona local Chris Wheeler, who bumped into his first pro main event with a stellar run in the B-Main as well behind club racing buddy and teammate Billy Fischer. Finally, we had a conversation with The Dirt Racing founder and race promoter Joey Christensen, who talked about what it takes to turn a big race into a legacy that’s running strong after 14 years.