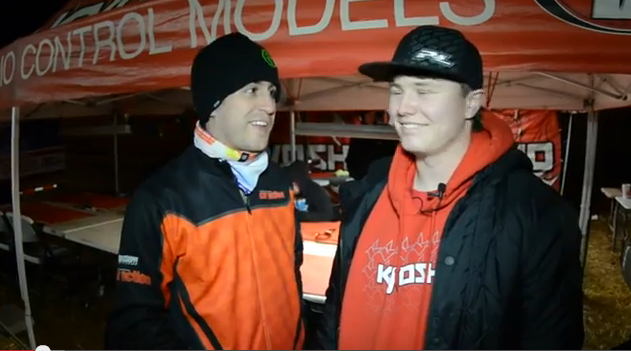 It was another late night, but qualifying for the 2013 The Dirt Nitro Challenge is officially over. It’s nothing but heads-up racing from here on out for the nitro classes, which includes 40+, Open, and Pro Truck on Saturday and the same divisions for Buggy on Sunday. We’ll also have 1/10-scale short course racing on the small track on Saturday (along with a 1/10-scale 2WD Gas Truck nostalgic exhibition class) and 1/5-scale competition for just the second year ever, running on the third Fear Farm track on Sunday. With today’s qualifying rounds running past midnight once again, the pit area cleared out faster than a school when someone pulls the fire alarm.

The winner of last year’s 1/5-scale race won’t be there to defend his title this weekend because he has bigger fish to fry. Team Losi Racing’s Adam Drake captured his third round TQ in six tries with a phenomenal run in tonight’s frigid final round, mounting a late charge in the final minutes of the race to prevent Jared Tebo from sweeping all three rounds of qualifying. Though Tebo matched Drake’s Thursday performance by TQing the first two rounds to lock up the front spot on the starting grid, it’s clear that Adam has done his homework over the winter and is confident that he is as prepared as ever.

The biggest story of the night, and perhaps the weekend until this point, was Team Kyosho teenager Drew Moller driving his way into the biggest main event of his young career. Having switched from TLR last year, it’s Moller’s first big nitro race since leaving for the MP9; indeed, his first round was a six!