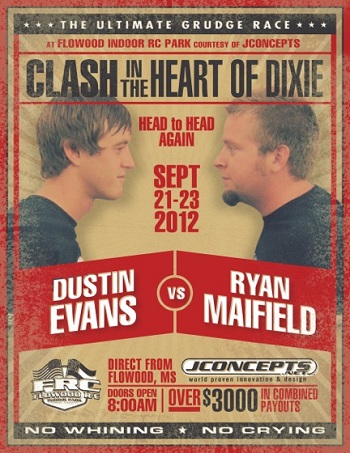 The anticipation is building for the 2012 JConcepts Indoor Clash. With over 450 pre-registered drivers, Flowood RC Park is going to be hit with the most unique event of the year. If you have not Get ready, as the Clash will be highlighted by the head-to-head match-up featuring Team Associated’s Ryan Maifield vs. TLR’s Dustin Evans in 3 different classes of competition including a worlds prelude in the 1/8th buggy nitro division. An event featuring these top 2 drivers is not the only competition in the house, the Clash presents 14 classes with drivers coming in from all around to compete against each other in this 6th annual event. The Clash is a can’t miss event.

The 2012 JConcepts Indoor Clash has been officially announced. $3000 combined cash payout offered to winning drivers at one of a kind indoor event.

For 2012 the JConcepts Clash is going Indoors to the Flowood, Indoor R/C park in Flowood, Mississippi on the weekend of September 21-23, 2012. A large building and track operated by super promoter Bubba Barham equals big-time Clash action. The 6th annual event will take place on a newly built indoor race course at the Flowood R/C park and will be specifically built for this annual event. With the uniqueness of the Clash, special considerations are always made to the layout, making it both electric and nitro friendly; rest assured your vehicle of choice will be tested. A 125’x100’ Indoor track is easily among the largest in the world and contains one of the best indoor racing surfaces in existence. Be prepared for a well run race courtesy of the JConcepts Events crew and a famous race director who will be named at a later date.

The Clash has always been one of the more spectacular events in the world drawing entries from all parts of the world. Racers such as Ryan Maifield, Ryan Cavalieri, Jared Tebo, Lee Martin, JR Mitch, Steven Hartson, Tanner Denney, Brent Thielke, Jorn Neumann, Hupo Honigl, Barry Pettit, Billy Easton, Ryan Eckert, Jason Ruona and Paul Wynn have always made racing fast and exciting at the Clash throughout the years. For the 6th annual event, it’s indoors and the competition should be more fierce than ever. One of the most entertaining events, and an excellent platform for cross promotion, the Clash is in a league by itself.

The 2011 event held in Coral Springs, Florida attracted the largest turnout in the 5 year history of the event making it a smashing success. For 2012, Flowood is conveniently close to the Jackson International Airport and within a 5 minute drive to the Flowood Indoor R/C park. Make reservations now for the 2012 JConcepts Clash, “Where the Powers Explode.”

Racers will receive an official 6th annual JConcepts Clash t-shirt with their first entry and have access to a select amount of top-shelf prizes throughout the weekend courtesy of event sponsors. The 2012 Clash is also a Cash payout event with winning drivers in each class receiving the designated payout as indicated on the entry form.

Please note this is a new date selection for this year’s Clash event to accommodate the IFMAR World Championships scheduled during the typical Clash race date in December. 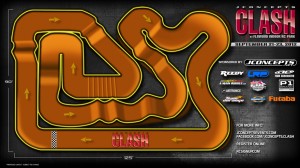