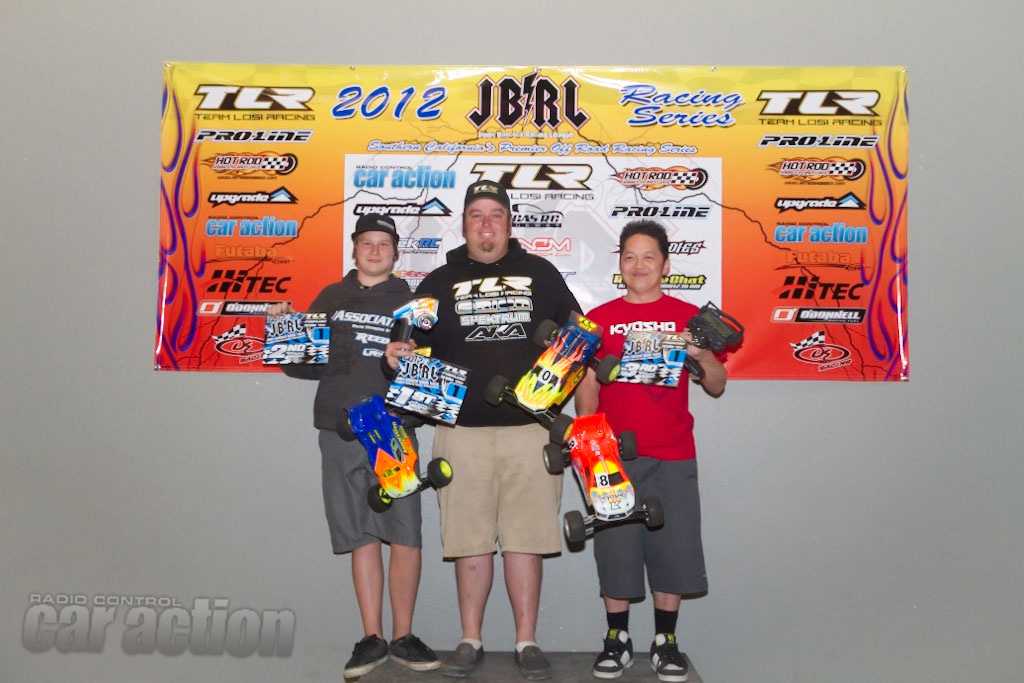 This last weekend was the opening round of the 2012 JBRL Electric racing series. The JBRL is an 8 race, monthly series put on by Jimmy Babcock. Each race is held at a different track all over Southern California. This last weekend’s event was at OC/RC in Huntington Beach, California. OC/RC is one of the premier indoor tracks in SoCal. It is a smooth clay track surface that provides great traction and some very fast paced racing.

A record-breaking turnout of just under 400 entries kicked of this season! Racing started at 9am and mains went all the way passed 2am. It is spectacular seeing the popularity of the series and racing in the area but many of the racers weren’t pleased with the long waits between rounds.

Open 2wd Buggy qualifying was dominated by TLR’s Cody Turner, laying down some blistering fast 16-lap runs. Cody had a bit of a rough start getting tangled with teammate Mike Truhe. Team Associated’s Chris Jarosz capitalized on the wreck and made his way to the front of the pack where he would stay and take the win for the first round of the series. Cody Turner made his was back up to a respectable 2nd place finish, followed by Kyosho team driver, Zack Rogers.

Electric 8th scale was a class that didn’t have a very strong showing last season and race director, Jimmy Babcock, announced it to be a provisional class this year. If enough people showed up for the majority of the rounds, it would count towards the cash payout at the end of the series. There was no lack of attendance in the opening round with 17 entries. The main was one of the most exciting races of the night. Team Durango’s Carson Wernimont TQ’ed and got off to a clean start with Tamiya driver, Jake Thayer in tow. Jake made a few mistake which allowed Carson to keep an extremely fast pace and pull away from the field. 7-minutes into the main Carson had an electronic failure, which allowed Thayer and Team Associated driver Matthew Olson start battling for the lead. The battle came down to the last lap of the 10–minute main where Olson was able to hang on and take the win.

Next stop for the series will be Palm Desert R/C Raceway in early April. It will be very interesting to so the turnout for the 2nd round. If it goes anything like last year, the attendance will not be dropping off very much.

Check out the photo gallery below!
[nggallery id=666]