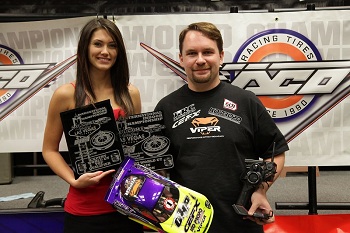 Josh Cyrul continued his dominance over the Expert 10.5 World GT category with another win at the 2012 International Indoor Championships in Las Vegas.

Only joining forces with Viper R/C Solutions one month ago, Josh’s VTX1 powered CEFX Griffin 10 blasted into the TQ position in the final round of qualifying. Josh used the pole position to his advantage, catapulting off the line and dominating the five minute race. The smooth power delivery of the VTX1 was able to out run a field of international talent in the 10.5 blinky mode class.

Adding to his impressive debut with Viper, Josh also qualified 5th in the Modified 1/12 class. After a hard fought battle with several other drivers for the final podium position, Josh came up just short finishing in 4th place. It’s indeed a great debut event with Viper R/C and return to racing after a 7 month break.

Viper also hit the jackpot with Mark Smyka qualifying 3rd in the 1/12 scale 17.5 class. Impressive opening laps would move him up to second and then a brief taste of the lead until a wild set of corners resorted the leaders. Mark put his head down and buried the throttle on the VTX1 to fight back to a strong 2nd place finish.

Rounding out the Viper A Main finishes was Nick Malato who put his replica McLaren F1 car into the top 10 in the 21.5 Formula 1 class.

All three drivers used Viper’s VTX1 speed control and dialed in their settings with the ProGauge. Look for the winning set ups to be posted at www.viper-rc.com.

If you like this article, check out this additional article on Viper.