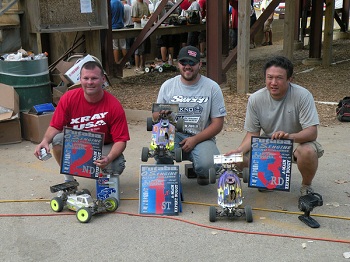 This weekend I competed in the 2012 Futaba/OS Nitro Challenge at St. Louis Dirtburners. I entered into two classes, Expert Nitro Buggy and Electric 1/8th Buggy (no class separation). After the first round of practice I realized my cars needed a lot of work. I went through and was able to make changes to one car and relate it over to the other. By doing this I was able to find a setup that worked better, faster. I felt pretty comfortable for round one in each car. I was about 8th in Ebuggy and about 5th in Nitro. I felt my nitro car could be a little better. With some work I was actually able to TQ round 3 in Nitro buggy. After qualifying I was siting 8th overall in Ebuggy and 4th on the grid in Nitro. Ebuggy went great, was running about 4th overall when I had an issue at about the 5min mark. The bolts holding the motor to the mount pulled the threads out of the motor plate, ending my run. I finished 11th overall in that class. Nitro was getting ready to start up when my dad (pitman) and I decided on a pit strategy. We decided to run the race like you would a 1:1 car. We ran the fuel stops “backwards”. We knew I could go 9:30 on a run easily with fuel left in the tank. We figured that stopping at the 4:30 mark, then again at 13min, and finally at 22min would would be our fuel strategy. I personally like this way because it gives me a long fuel run at the end to get into a rhythm and really apply the pressure at the end instead of having to push for 3min or conserve a little on fuel…At the start of the nitro race I went from 4th to last in the first lap (not unheard of). I was calm about it knowing I was going to pit soon anyway and would have lost those spots anyway on pit lane. At the 4:30 mark I came in and topped the tank off. When I re-entered the track I was a total of 23 seconds down to the leaders (one lap is about 29seconds). I got into my rhythm and started logging laps. When everyone else came into pit around the 8-10min mark I was picking them off one my one. At 14min, when I came in for my pit I came in about 4th and went out about 6th. When 20min came around I had a horrible lap dealing with lap traffic, my dad called me in early to get me away from the lap traffic. I came in knowing I had to make a 10min run. I exited pit lane 4th but I knew the people in front of me had to make at least one maybe 2 more pit stops. I was right. I got into a rhythm and just picked them all off. 25min in I was leading, at 27min they all stopped again for final fuel stops. That put me up over 18seconds on the field. Just laid back and cruised to the finish. Second and third place were in front of me on the track. I laid back and let them battle it out for the 2nd spot.

This race is held at my local track, for 5 years I’ve had nothing but bad luck at this race. With the help of Sweep Racing Tires, Boca Bearings, PTRC Fluids, and Byrons Fuel I was able to put my JQ TheCar 1st overall in the Expert Class at the 2012 Futaba/OS Nitro Challenge. Next race….the Byrons Fuel Heartland Challenge in Omaha, NE. 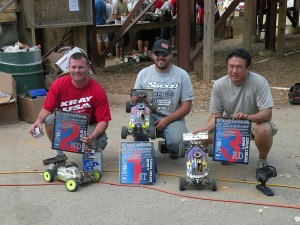 If you like this article, check out this additional article on JQ Products.