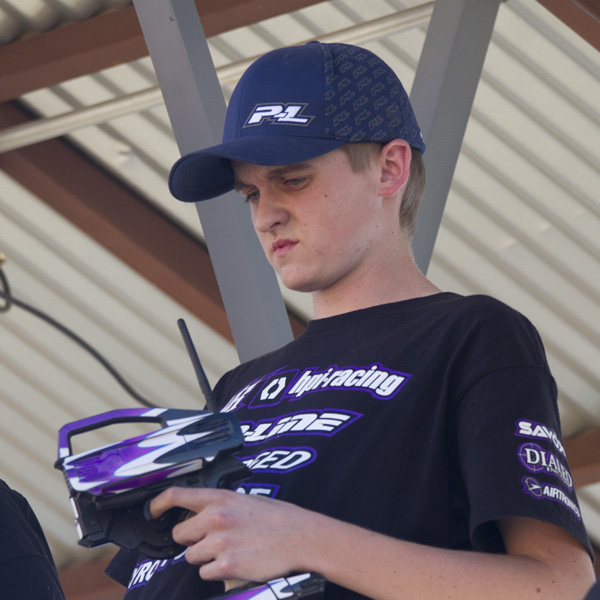 Its Sunday, and the final day of events at the 2012 Dirt Nitro Challenge. Buggy mains will be running all day and finish with the Pro Buggy A-main this evening.

Fresh off of a victory yesterday in the Pro Truggy finals, Hot Bodies driver, Ty Tessmann will lead the pro field into the first corner this evening. Ty has been running ultra consistent all week and would not surprise anyone if he leads the race from start to finish.

The “Phenom” Dakotah Phend will be starting second on the grid and has been quite fast with his TLR buggy. The youngster from Michigan has really been on a mission lately. His lap times are just as fast as any other top pro. If he keeps the rubber on the dirt, look for him to be on the podium

Team Associated’s Ryan Cavalieri will be starting 3rd on the grid. Last night he wrapped up 2nd place in the Pro Truggy main and is hungry to get a win in buggy.

One of the best-looking buggies around the track is the Team Durango buggy of 15 year old, Carson Wernimont. Carson was the shocker of qualifying with 2 phenomenal runs in round 2 and 3, capturing a couple of 4th place finishes overall. Those were good enough for a 5th place start just in front of current world champion, Cody King.

Ty Tessmann was definitely on top of his game this weekend. After a stellar truggy main on Saturday night, the young Canadian drove his Hot Bodies D8 buggy to an even more stellar run Sunday night. Tessmann got off to a great start and found his groove quickly. Team Associated’s Ryan Cavalieri was off to a great start as well, climbing up to 2nd place after 4 laps. Cavalieri kept closing the gap between himself and Tessmann but every time he was within striking distance a bobble would allow Ty to pull away. Cavalieri’s Teammate, Ryan Maifield worked his way through the pack to join the leaders early in the race as well. Bad luck struck Cavalieri on lap 20 when his steering went out, retiring him from the main. Maifield was left to chase down Tessman with his blistering pace but a collision with traffic left him with broken steering linkage. Ty’s teammate, Jesse Robbers fell back early in the race only to work his way back up to a second place finish. Kyosho’s Jared Tebo had some trouble in qualifying and worked his way up to the final podium spot all the way from 9th on the grid.

Lap by lap, from start to finish, Ty Tessmann was unstoppable this weekend. Next stop for Ty will be England for the Neobuggy race where he will be going in with a load of confidence after this double win.