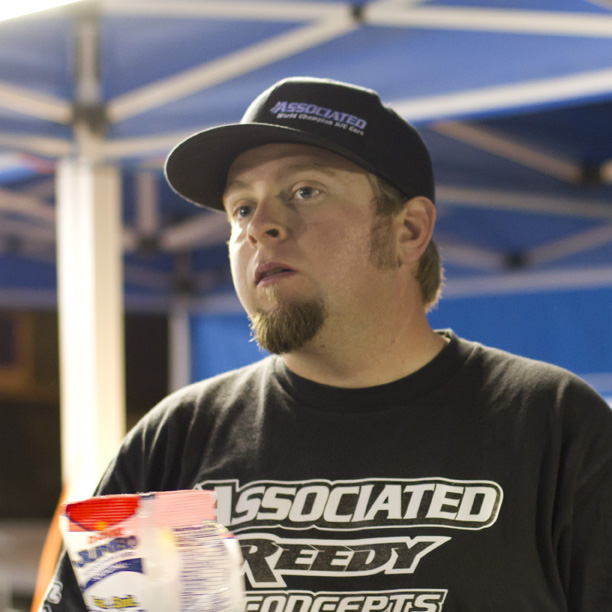 The final round of buggy qualifying wrapped up just after midnight. Truggy mains start this morning where Team Associated’s Ryan Maifield reigns as top qualifier after TQing round 2 and 3 on Thursday. TLR’s veteran, Adam Drake looks to be on point after a trio of consistent runs putting him 3rd on the starting grid. The young Canadian, Ty Tessman has been fast with both of his Hot Bodies cars. Last night he secured TQ in the Pro Buggy class and will be starting 2nd on the grid for ro truggy. Defending champ, Jared Tebo had a little bit of bad luck in qualifying but still sits 6th on the grid. Renaud Savoya leads the group Euro drivers that made the trek all the way to Arizona this year with his Xray truck.

The 30-minute truggy A-mains will wrap up today on the nitro track. Then it will be off to the smaller tracks for short course and 1:5 scale truck qualifying!

What started of as a 30-minute turned 2-hour delay before the engines of the Pro Truggy A-main were fired for their warm-up laps. Daylight all but disappeared and was replace by artificial lights that lit the nitro exhaust like a cloud of fog. The PA was fired back up and after a quick round of driver introductions it was time to start the “big show.”

Team Associated’s Ryan Maifield took the pole while the rest of the field stacked up behind. A clean start for the front of the pack was lead by Maifield with Hot Bodies’ Ty Tessmann in tow. Maifield tangled with a hay bail before the first washboard section and would relinquish the lead to Tessmann. After the marshal put Maifield back out on the track is was obvious his steering was not working properly. What turned out to be a broken servo linkage left Tessmann all alone with a large lead over Team Associated’s Ryan Cavalieri and TLR’s Adam Drake. Drake and Cavalieri swapped position a number off times, showing off their control and patience the cheering crowd. Kyosho’s Jared Tebo would be not far behind but a number of small mistakes would make him fall back.

Drake would succumb to some mistakes and let Cavalieri step out with some breathing room over 3rd place while Tessmann gained a 10+ second lead over the pack.

TLR’s Mike Truhe mad a charge for a podium position and challenged teammate, Drake to a short-lived duel.

A nearly flawless run by Tessmann would earn him the crown of 2012 Nitro Challenge Truggy Champion followed by Ryan Cavalieri and Adam Drake in 2nd and 3rd respectively.