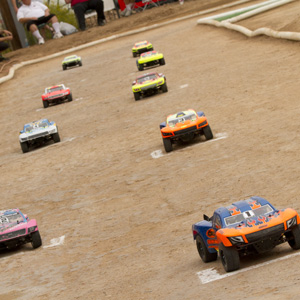 After two very long days of qualifying in the desert sun, it was time for some triple A-mains at the Cactus Classic!

2wd Modified buggy started out with top qualifier Jared Tebo leading the pack and world champion, Ryan Cavalieri in tow. A crash by Tebo half way through A1 would give Cavalieri the lead, and allow TLR’s Dustin Evand and local hero, Ryan Maifield to jump up into the battle for the top spot. Maifield crashed and found himself back in the middle of the pack while Cavalieri stayed in top form leading the field around the track. Needing to make up ground, Maifield kicked it into overdrive and started clicking off some insanely fast laps, being the only driver to dip into the 23-second range. In a last ditch effort, Maifield had Cavalieri in his sights but settle for 2nd, just tenths behind Cavalieri. Dakotah Phend got off to great start in A2 and worked his way to the front of the pack from the middle of the grid. Ryan Maifeld didn’t get off to a good start but was able to work his way up from the back of the pack. Maifield was able to chip away at the lead but Phend’s rock-solid laps were good enough to take the win in A2. The overall win was completely up in the air at the start of A3. Cavalieri had a win, Phend had a win, and Maifield a pair of 2nds. Maifield needed nothing short of a 1st place finish to even have a chance to win. With everyone in attendance surrounding the track, Ryan Maifield laid down one of the best runs I have seen. Every single lap was in the 24-second range (unbelievable!) and he showed great patience working his way to the front of the pack. Once out there, his mistake free driving allowed him to pull away to a big lead. The battle for 2nd was between Cavalieri and could be spoiler, Jared Tebo. Cavalieri was able to capitalize on Jared going wide and pick up 2nd position where he would finish. Maifield took the win in A3 and would beat his teammate, Cavalieri, in the tie-breaker thanks to his extremely fast A3 run.

The “Ryan Show” continued in 4wd modified buggy. Following his streak of great A1 runs, Ryan Cavalieri easily took the first main with a 4-second cushion. TQ, Ryan Maifield wasn’t going to let his teammate walk away with A2 easily. Maifield was able to use his pole position to complete advantage leading A2 from start to finish. Germany’s Jorn Neumann, and Ryan Cavalieri had a great battle for 2nd but it was Cavalieri who would prevail after Jorn got a bit sideways in the front jump section. A3 was setup for another epic duel between the Associated teammates. They were tied with a win and a 2nd each. The temperatures cooled off later in the day and the track was the fastest it’s been all week. Maifield and Cavalieri broke away from the field quickly. At any point in the race you could cover both their cars with a small rug. The pace the B44.1’s were keeping was unimaginably fast. Gil Losi Jr. was in attendence and said, “Those cars were going so fast around the track that they looked like they were going to explode at any minute.” After an amazing display of driving between the pair, it was Ryan Maifield that would come out on top, winning A3 and the overall win.

Modified Racing Truck was a one truck show. Ryan Cavalieri was TQ and took only two mains to secure the overall title. 2nd place was up for grabs between TLR’s Dustin Evans and Ryan Maifield. Evans finished second in A1 and Maifield second in A2. Maifield stepped out to the front on lap 2 in A3 and was able to put a large gap on the field and walk away with and easy win, wrapping up the runner-up position on the podium.

The short course classes became a bit more interested on Sunday as the breeze picked up early in the day. 2wd modified short course saw many blow-overs in each race, specially on the huge front jump section. Ryan Maifield was able to defeat the winds with his SC-10 and secure the title by holding off a hard charging Jared tebo in the first two mains. A3 was quite interesting as the gusts were the strongest of the day. After quite a few lead changes, Team Associated driver, Kody Numedahl was able to keep his truck wheel side down and take the win. A pair of 2nd place finishes was enough for Tebo to hang on for a 2nd overall finish, and Numedahl filling the last podium spot with his A3 win.

The “Phenom,” Dakotah Phend started on the pole in 4wd short course but had some issues holding of the fleet of rocket-fast Durango trucks in the mains. A1 was swept by Durango with Joern Neumann on top, follow by teammates, Ryan Lutz and Hupo Honigl in 2nd and 3rd respectively. Joern was able to get out to another early lead in A2 but Phend was not going to go down without a battle. A late charge by Dakotah and His TEN-SCTE came down to a side-by-side last lap battle. A pair of high flying trucks through the rhythm section sent the crowd to their feet. Neumann was still in the lead but Phend carried a bit more speed through the jumps. Coming into the last double, Phend was closing but went tumbling by the line just a matter of inches behing the young German’s Durango. Joern took the win and wrapped up the overall championship for the class. Austrian, Hupo Honigl was able to win A3 over Phend and secure the 2nd spot on the podium in 4wd short course.

Check out the gallery below for some action and all of the podium shots!