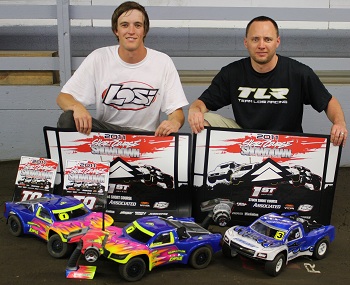 The 2nd visit of the 2011 Short Course Showdown tour took place the weekend of June 17-19 2011 and was hosted by S&N Trackside Hobbies and Raceway in Brookfield, WI. This world class event featured a vendors row, exhibition XXX-SCB race with the Top Qualifiers from each class and free giveaways to racers and spectators which included everything from hats to full kits.

It was Losi Driver Dustin Evans who dominated qualifying with both his Losi XXX-SCT and Losi 4wd Ten-SCTE by taking the TQ position in both. Dustin found himself in a little trouble early in both mains but came from behind in an amazing driving demonstration to eventually win both classes. Dustin used Orion ESC’s, Spektrum DX3R Pro transmitter, Xcelorin batteries and AKA Wishbone tires on both of his trucks.

In the 2wd Stock Short Course class it was Brian Lutz who took the win from the 3rd Qualifying position with his Fantom powered Losi XXX-SCT.

Congratulations to both Dustin and Brian along with Scotty Ernst for hosting another amazing event.