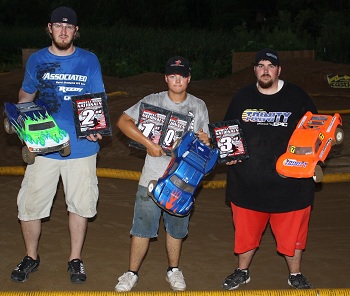 This past weekend was the inaugural Midwest Short Course Nationals held at the Fort Dodge RC Off-road Raceway, http://www.fortdodgerc.com . Some of the Midwest’s fastest short course drivers battled the intense heat and each other as they tried to take home a national title. The temperature was in the upper 90′s and once you factored in all the humidity it felt like 110 degrees, even in the shade. Due to the heat the race program was modified for the driver’s safety and instead of running 4 rounds of qualifying and AAA Mains, the race directors decided to run 3 qualifiers and single A Mains which made for exciting single A Mains.

Also racing that weekend was VP-Pro driver Jeff Green. Green finished 2nd in the 2WD Modified B Main and bumped up into the A Main where he finished a respectable 9th. Both drivers were using VP-Pro Axman short course tires.