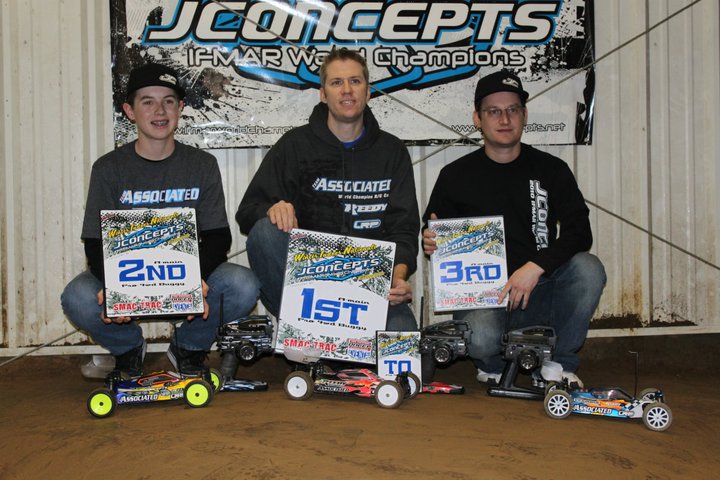 The “Gateway to the best” is the slogan for SmacTrac raceway and the racers showed up in large numbers to compete at the 1st ever National Indoor Series event. With 270 entries, a fantastic turnout of the best racers from the Midwest showed up to compete against the out of town boys from California, Arizona, Florida and beyond.

Scott McDonald, Rod Rippee, Chris Baumgartner, John Piant along with others teamed up to bring an entirely new track layout for the Winter Indoor Nationals and it didn’t disappoint. Driving from left to right, a flowing off-power roller section at the end of the straight-away began the lap, a large 15’ double jump made drivers use some power and technique to handle the center jump while moving toward the drivers stand into a tricky single / roller. A dangerous 6-pack jump section made side-by-side racing a challenging with a 180 degree corner on the exit. A fun double jump with another 180 degree corner into a wood moguls section leading to the “hip jump” which helped power down the straight-away.

2wd modified was a battle in qualifying between JConcepts / Associated driver Tanner Denney and Team Losi driver Chris Baumgartner. With Tanner just coming off the 4wd Open class victory only a week earlier at the Reedy Race of Champions, his confidence was high and he took rounds 3 and 4 with a vengeance by earning the TQ over stiff competition with impressive and consistent runs. Chris Baumgartner would start 2nd with JP Richards starting 3rd. Tanner relied on the JConcepts Punisher B4.1 body, 6” HD wing with Rips front tire and Bar Codes rear tires in green compound.

The Short Course Modified Class saw Justin Driemeier take round 1 and 2 with his JConcepts equipped SCX-60. Round 3 and 4 again went to young Tanner Denney who appeared to have found his driving touch just in time to take the tie-break and TQ position for Team Associated and JConcepts. Justin would end up qualifying in the 2nd position and lining up in the 3rd position was hometown driver Rod Rippee. The top 3 drivers all qualified with the JConcepts Ford Raptor body, JConcepts Bar Codes tires in green compound and Rulux wheels.

The 4wd modified class was the most competitive of all classes in qualifying with a different driver taking TQ for each round in all 4 qualifiers. Brent Thielke and Tanner Denney took rounds 1 and 2, Tanner was running the fastest time of the event squeezing in 19 laps in qualifying. Round 3 went to Associated driver Michael Paige and round 4 went to Missouri’s Mitchell Gardner. After the tie-breaks and dropped scores, Brent Thielke with his JConcepts equipped Associated B44.1 would be awarded the TQ with Michael Paige 2nd, Josh Wheeler 3rd, Tanner Denney 4th and Jason Ruona 5th. JConcepts products were once again all over the top vehicles in this class including TQ Brent Thielke running the Punisher body and the front and rear Bar Codes combination in blue and green compound.

The Modified truck class saw TLR driver Chris Baumgartner take himself to the top of the field with JP Richards qualifying in the 2nd position. Both drivers would each TQ 2 rounds of qualifying but with the tie-breaker Chris won on combined times giving him the coveted pole position.

The 2wd modified mains started with Justin Driemeier taking A-1 with a stellar drive. Tanner Denney and Brent Thielke both held the lead on numerous occasions but in the end Justin was too much and took the first A-main with a convincing win.

A-2 started again with Tanner Denney taking the lead and holding it for the majority of the race. Brent Thielke and JP Richards would challenge for the win and on the last several laps Brent was only a few feet behind. On the last lap Tanner got slightly loose at the end of the straight-away and tucked it into the pipe and in a chain reaction Brent got stuck as well. Driving around the outside, JP Richards appeared to have the race in hand when a loose car popped out and flipped him over causing a massive pile-up. Brent was turn-marshaled quickly and drove across the finish line taking a bizarre A-2 victory. JP Richards would finish 2nd and Tanner would drop to 5th eliminating him from the possible overall win.

A-3 was completely up for grabs and Tanner would once again jump to the top of the field and lead-out the first several laps. A small mistake by Tanner put JP Richards into the lead and he proceeded to pull a large lead on 2nd place Brent Thielke who had a close race with Chris Baumgartner. Chris was driving very clean as he pressured Thielke for several laps as JP Richards increased his lead. The finishing order in A-3 would be JP Richards 1st, Brent Thielke 2nd and Chris Baumgartner 3rd. First and 2nd place were heavily equipped with JConcepts, each driver running Bar Codes in green compound, Rips front tires in green compound and JConcepts bodies.

The Modified Short Course was a battle all weekend between Tanner Denney and Justin Driemeier and the mains proved to be no exception. TQ Tanner Denney showed the fast way around the track in A-1 with his JConcepts equipped SC10 Factory Team and maintained a small lead over Driemeier. Each driver took their turn with a slight bobble or mistake which would change the running distance but in the end Tanner would hold on for the A-1 win. In A-2 Driemeier took the lead early as Tanner struggled with a few bobbles in traffic which allowed Driemeier to stretch it out to a comfortable distance to the finish.

With each driver having a 1st and 2nd, A-3 would be the deciding factor. From the TQ position Tanner jumped out to a sizeable lead while Driemeier fought with traffic. With a perfect drive Tanner Denney won A-3 and took the overall win with Driemeier taking 2nd and Rod Rippee 3rd. All 3 drivers were using the JConcepts Ford Raptor body, Bar Codes tires in green compound and Rulux wheels.

A-1 started with Brent Thielke taking the lead and he found a steady rhythm early-on in the race. Mayhem ensued behind Thielke as drivers battled for position and Josh Wheeler emerged in 2nd and attempted to run down Thielke. Josh dropped his pace and came within 1 second of Thielke but it wasn’t enough and ultimately settled for 2nd. Tanner Denney made a run to the front late in the race and took hot-lap during the process and finished in 3rd. A-2 lined up and Thielke was off once again with a large lead. Making a small mistake Thielke, Tanner Denney took the lead with the hot hand in A-2 and pushed very hard making 18 laps. The battle was on behind Tanner as Thielke, Driemeier and Ruona remained close in freight-train fashion, in the 2nd, 3rd and 4th place respectively. Ruona was able to capitalize on others’ mistakes and take over the 2nd position with one lap to go and hold it until the finish with Driemeier taking 3rd.

A-3 once again shaped up to be the decisive race and the quick start would go to Thielke. Tanner Denney qualifying in the 4th position, worked his way into 2nd almost immediately and tried to run down Thielke who was out front and Punishing the competition, with B44.1 JC Punisher body. Tanner put down some hot-laps and tighten the gap on several occasions but Thielke’s quick and consistent driving was too much. Finishing order in A-3 would be Thielke taking the win and overall championship with Tanner Denney 2nd and Jason Ruona 3rd. The top 3 drivers were equipped with JConcepts Punisher bodies and green and blue compound Bar Codes.

Local TLR driver Chris Baumgartner took an early lead with JP Richards hot on his heels. A few small mistakes from Baumgartner allowed JP to take the lead and pull a small gap. JP Richards took the hot lap on his way to a 5 second lead which he held to the finish in A-1. Richards finished with the win followed by Baumgartner in 2nd and Ben Ellis in 3rd. A-2 belonged to Baumgartner, running one of his best mains of the weekend while holding off several charges from JP who finished in the 2nd position with Ben Ellis once again finishing in 3rd.

A huge thank you to all that participated in the 1st ever Indoor National Series event along with SmacTrac Raceway and Blaze R/C. Mark the calendar now, race 2 is scheduled for April 16-17 at OCRC Raceway in Huntington Beach, CA. Please visit www.indoornationals.com to view the complete 2011 schedule. 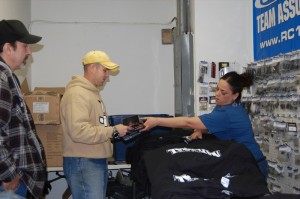 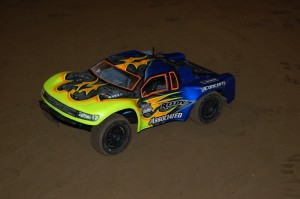 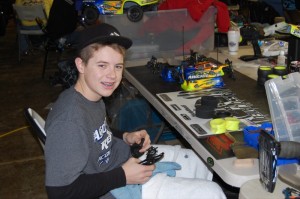 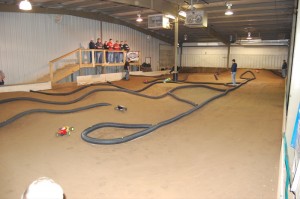 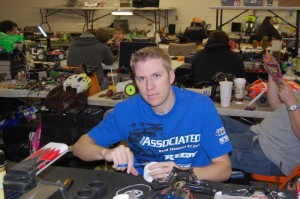