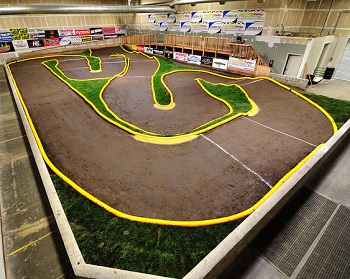 Wow, back from yet another great event hosted by the Outback Raceway up in Chico, Ca. Over the 4th of July weekend the Jconcepts Summer Indoor Nationals would be held. Over 160+ race entries in all of the top classes would make for some great indoor racing around.

I didn’t make it to open practice until lunch time or so. This would be more than fine since the track would change over the course of the next few hours. The track was to be ran without watering which meant we would be on smoothies by the time qualifying would happen. Sure enough by the end of practice smoothies were good for a few tenths of a second. My personal cars seemed to be working quite well since I was familiar with the track already. This allowed me to focus on the team drivers like Ryan Lutz, Phil Atondo, Lloyd Dassonville, and others. The team did have my back though hooking me up with a fine refreshing beverage!

Qualifying was going pretty well for the Tekin team with Ryan Lutz setting overall Tq with his Pro 4 powered Desc410r to Tq runs in Rds 1 2 3 and 4 posting a run nearly 2 laps faster than 2nd place(Jason Ruona). Team driver Jason “Mo” Moberly would be sitting 3rd overall. The main would be hectic for the first few laps with the top guys all muscling for position. Ryan would run out in the lead from start to finish. Jason Moberly would have his hands full with “Hopper” and myself(sorry Mo!). In the end we all sorted it out. The race clock ended with Ryan Lutz taking the overall win an entire lap ahead of the field, Jason Moberly 4th, Randy Pike 5th.

4wd Mod would have top pro drivers up from Socal looking to battle with the top fast locals which included Tekin drivers Lloyd Dassonville and Ryan Lutz. Ryan would be sitting 6th overall which was great since we struggled to find an electrical gremlin in his car all through qualifying. Lloyd was 9th fastest. The mains were filled with so much action I can’t recall all of it. I hope someone got this on video! In the last few minutes Ryan would be up to 2nd place looking for a place to pass or a mistake to be made by Josh Numan. During this Ryan would loose a motor wire connection in the last 30 seconds ending his charge to the front. This was Ryan’s first time running for 10 minutes in his Dex410 buggy in competition. Lloyd would also fall to a mechanical issue around lap 21. Look for more of Ryan and his Tekin powered Team Durango Dex410 this week at the Hot Rod Shootout!
[nggallery id=283]