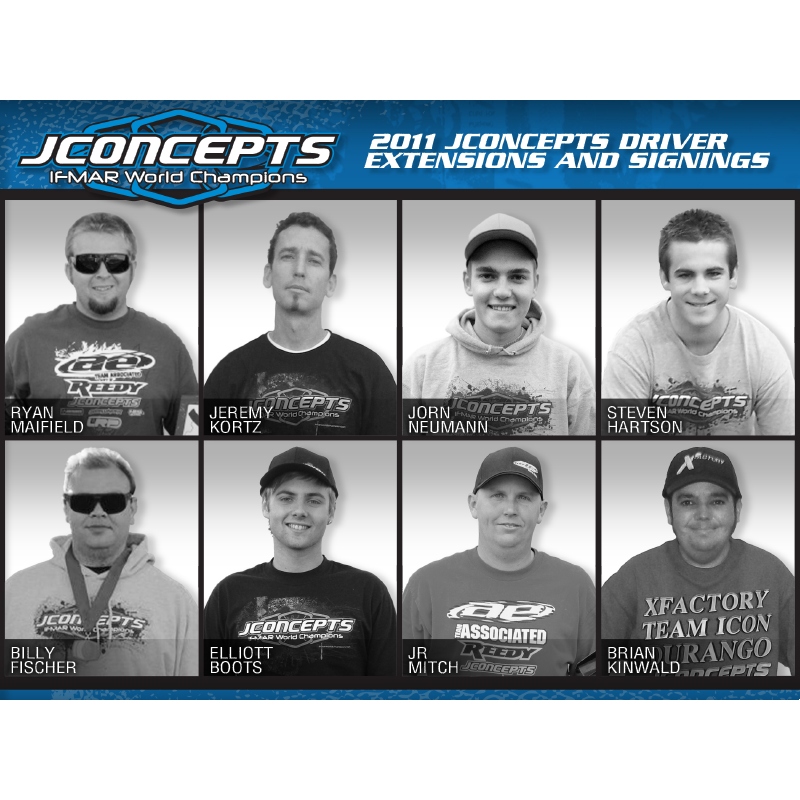 JConcepts would like to announce and welcome the following new and extending drivers to the 2011 racing team.

JConcepts is pleased to announce that Florida native and Pro driver JR Mitch has extended his agreement with JConcepts.

JR, known for his amazing natural driving talent and knowledge has brought JConcepts an edge in the Southeast division in the United States. Driving with sheer confidence and determination, JR routinely makes winning look easy.

Top notch, prepared and properly setup vehicles makes JR a threat anywhere in the world. JRs diversity runs through 7 different classes of competition and his knack for 1/8th off-road racing earned him a Florida State Series title and a place in the A-main at the ROAR Fuel Nationals, to just name a few.

JR is a true warrior on the race track; his will power is second to none. He has the unique ability to raise his game to another level which very few have. Racers like JR are a true joy to watch.

JR had this to say-

Ever since starting with JConcepts back in late 2008 it has been an unbelievable experience. I have never experienced anything like it in my whole R/C career, working with Jason and everyone at JConcepts has been a pleasure. I believe this move has helped me mature as a driver and helped me on to the next level of R/C racing. I look forward to working with them for many years to come.

Current 4wd Short Course national champion, 2010 1/8th buggy Worlds A-finalist and former ROAR national champion Jeremy Kortz has joined the JConcepts racing team. Racing since the 1980’s Jeremy Kortz is a triple threat in R/C off-road joining only a select group of drivers that is capable of winning in 1/10th off-road, 1/8th off-road and Short Course at any given event.

The thing about Jeremy that I really admire is that he is the ultimate competitor. He has the look and will of determination that separates him from many drivers on the track. The results speak for themselves; Jeremy is one of the fastest drivers in the world.

Jeremy had this to say-

I’m looking forward to working with Jason, Jon and the rest of the JConcepts team at the races. This is a great opportunity for me as their products extend into all the classes that I’m competitive in and I’m excited about the future.

JConcepts is pleased to announce that Pro driver Jorn Neumann has extended his agreement with JConcepts.

The incredibly dedicated racer began his racing career at a very young age and earned a European championship at 13 years old. More recently Jorn established himself on the world stage with an A-final performance at the 2010 IFMAR 1/8th World Championships.

Look for Jorn while racing a world calendar in 2011 through many different classes of competition. Everyone at JConcepts is proud to have Jorn on our team.

Jorn is a very talented driver that has a great talent in 1/10th and 1/8th off-road. His international experience and input are highly sought after and we look forward to having all his needs covered as he races around the world.

Jorn had this to say-

JConcepts accessories are my favorite of all-time. The appearance and performance of my vehicles are very important and as you can see with the Punisher line of bodies, JConcepts is complete. While racing JConcepts tires during the World Championships, Neobuggy and many events through 2010 I felt I had a competitive advantage. JConcepts is the place to be for me.

JConcepts is pleased to announce that Southern California native and Pro driver Steven Hartson has extended his agreement with JConcepts.

The incredibly dedicated racer began his racing career at a young age of 11 years old with an RC10 at SoCal Raceway. Stevens’s relationship with JConcepts began in 2005 when Steven took the ROAR national championship in the 4wd stock class in Scottsdale, AZ with the BJ4 Worlds Edition.

Since that time Steven has attended 2 IFMAR World Championships and been a constant force on the national scene. Steven’s racing ability and diversity runs through 7 different classes of competition and his knack for 2wd and 4wd racing earned him the Summer Indoor National title in 2010 as well as a JBRL series championship.

Everyone at JConcepts is proud to have the dedicated and knowledgeable Hartson team at our side.

Steven is a silent assassin on the race track. Brilliant car control, focus and determination; Steven makes it look easy. Always an asset in the pits, Steven goes the extra mile for the upcoming or novice racer when it comes to complicated builds, advice and knowhow.

Steven had this to say-

JConcepts has been there for me since the beginning of my racing career. The performance of their products speaks for themselves and with their support I’ve been able to obtain many of my goals in R/C. The look and feel of my vehicles is important and with the Punisher and Raptor bodies along with the JConcepts tires, I feel confident anytime I put those vehicles on the track.

JConcepts is pleased to announce that 2-time IFMAR World Champion and 30 time national champion Brian Kinwald, is taking his talents to JC.

The incredibly talented and disciplined driver from Arizona with an extensive pool of knowledge and expertise in both 1/10th and 1/8th off-road is a seasoned veteran who brings knowledge, speed and results to a steady foundation with JConcepts. Brian is known for being the “super tester” as no stone is left unturned in the BK pits which make him a valuable asset in all genres of R/C.

BK and JConcepts are a natural fit. As friends and competitors since 1993, Brian and I have had a connection for so long it will be a thrill to have him on our side. His competitive spirit and dedication is an example of everything I enjoy about this sport.

Brian Kinwald had this to say-

This is so dialed; I’m giddy right now with this opportunity. Mounting my new tires and painting my new Raptor body for my SCT trucks have me so pumped up. Wheelie city is all I can say right now after my first few runs. I’m looking forward to 2011 and beyond.

Elliott, known for his 1/8th off-road prowess and stunning speed began his R/C career at an early age. Since that time Elliott has grown into a world force with incredible talent capable of winning at all levels. As a 4-time European Junior Champion and 3-time British Champion, the speedy driver with a healthy resume of accomplishments will begin the 2011 racing season with full mechanical support from his father Chris making this one lethal combination.

Look for Elliott to excel early and often in 2011 and everyone at JConcepts is proud to have the dedicated and knowledgeable Boots team at our side.

After spending considerable time with Elliott and his team during the 2010 Worlds I can honestly say this is a professional and dedicated group with big-time racing goals. It’s a pleasure to watch Elliott drive as his speed and control are amazing. His results during 2010 with JConcepts were a credit to their teamwork and I expect nothing but the best in 2011.

Elliott had this to say-

Since joining JConcepts my racing has taken on another level, working with Jason, Paul and Jon has been a pleasure. They have brought me into the development side of the product which is exciting. My perception on the accessories and the performance capability of working with a sound group has truly giving me an advantage and an advantage I intend on taking advantage of.

The talented, disciplined and popular driver from Arizona with a history of knowledge and expertise in both 1/10th and 1/8th off-road is a bringing a pool of capability to a steady foundation with JConcepts. Billy, known for his professionally detailed vehicles and top notch performance brings another personable representative to the local and world JConcepts racing team.

Look for Billy early in 2011 while attending events such as The Dirt Nitro Challenge and Cactus Classic. Everyone at JConcepts is proud to have Billy as a fine new addition to the 2011 racing team.

Billy is guy that I continually watch at the larger events. Aesthetically and mechanically his vehicles always look good and catch your eye during practice and racing action. It will be a pleasure to watch Billy with JConcepts as he is continually in the hunt while never backing down to anyone.

Billy Fischer had this to say-

I would like to thank JConcepts for this opportunity. Regardless of the vehicle I was running, JConcepts has always been right there to help me out with anything I ever needed. Jason, Jon, Paul and Allison are an awesome group to work with. I look forward to 2011 and a long lasting relationship and some awesome results.