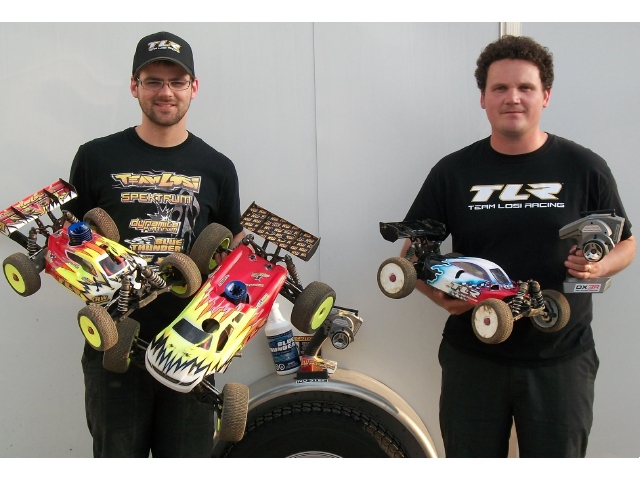 The 2011 JConcepts 1/8 Spring Nationals were held at the HobbyTown USA Hobbyplex in Omaha, Nebraska last weekend. Over 150 racers were in attendance and treated to the luxurious indoor, air conditioned pits of the Hobbyplex.

Sunday all the nitro and electric mains were ran, with electric buggy running AAA mains. The first electric buggy A main was run early in the race program while the track was still sticky. Traction roll was the catch phrase of the race. The lead changed five or six times between Team Associated’s Mack Vanderbeek and Jason Ruona and Team Losi Racing’s Alex Sturgeon. With two laps left to go, the graveyard—an offset mogul section—claimed two more victims as Mack and Jason sat upside down, allowing Alex a second chance at the win. It was a wild finish. Mack and Alex jumped the table top before the finish line and collided in mid air at the loop. Alex took the first main by six tenths of a second.

The second electric buggy A main started out like the first as a quick crash shuffled Alex to mid pack, but he closed the gap quickly and never looked back. Mack again took second and Team Tekin’s Ben Burtle snuck up to third. With the win in hand, Alex sat out the last main and watched Jason Ruona walk away with the last electric buggy A main securing second overall, with Mack Vanderbeek taking third.

With several dramatic finishes already taken place, the excitement had built for the expert truggy a-main. It looked like another heart stopper was in store as a back and forth battle developed between Kendall Welch and Jason Porter. Unfortunately, Jason broke on lap 16. Kendall then stretched more than a lap lead over Chad Parks and Jason Ruona who were having a close race of their own for second and third. Suddenly, Kendall’s truck came to a halt and gave life to an otherwise dull race for the lead. It turns out that Kendall’s receiver pack had come unplugged. His problem came within his pit window, so it didn’t hurt him too badly, and when Chad had to pit for fuel, Kendall regained the lead. Chad Parks would finish second and Jason Ruona would capture his second podium of the weekend.

Everyone was looking towards a battle between Team Losi Racing’s Kendall Welch and Team Durango’s Taylor James in the expert buggy finale. Instead, it was Jason Ruona in front of the opening laps after the top two qualifiers crashed on the first lap. Jason would fend off Chad Parks and Kendall for the first ten minutes. A flame out would take Chad out of the picture, while Taylor marched back up to the front. The early storyline of the race would be run time. Kendall pitted at the seven-minute mark, while Jason and Taylor pitted at the 9 and 10-minutes, respectively. For a while it looked like the mileage advantage was working until a few wrecks and some traffic nullified it. Kendall drove a flawless second half with Jason Ruona finishing a strong second and Taylor James finished third.

Video of the Expert Buggy A Main