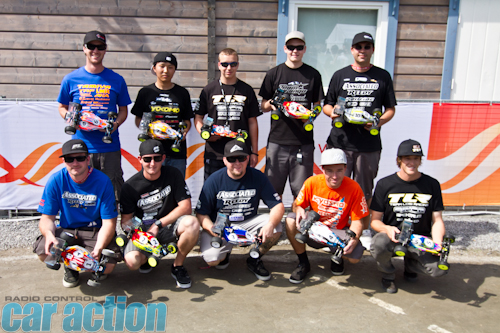 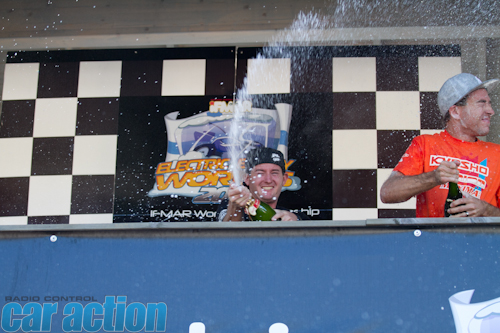 Finals day for the 2wd portion of the IFMAR Worlds was filled with many mixed emotions. Each of the three final races between all drivers could have offered numerous variations of winners. In Tebo’s Final #1, he checked out and at one had nearly an entire straight away lead on the field. Not bad for a guy that started in the 4th qualifying position.  The crowd however was chanting for AE’s Neil Cragg. As Neil would speed down the straight away all you could hear was “GO Neil!, GO Neil!” In Final #2 Cavalieri laid down a fantastic run. Teammate Ryan Maifield was in tow the entire time and occasionally looked as if he had the better line but proceeded to back off just a little bit in order to protect Cavalieri’s position. Tebo held on as close as he could but found himself further into the pack then what he would have preferred.  Final #3 became a sad story for Neil Cragg(TQ), during his first minute in practice he managed to sheer off the front right wheel which immediately eliminated his chances of being in contention for another World Title. It was once again AE’s Ryan Cavalieri who keep up his game during the nerve racking final round and clinched another World Title. Ryan’s previous World Titles were in 4wd, one with Losi piloting the xx-4, second with a J-Concepts/AE BJ4. In the world of RC there are not too many races outside of Masami who have won back to back worlds let alone three titles. Sundays 4wd main event should be quite interesting considering the fact that the weather looks to making a turn for the worse. Scheduled forecast… WET… VERY WET!! Event organizers are in the process of putting together a serious of backup plans which consist of either eliminating rounds of qualifying, racing in the wet, and even extending the event by one day. Sounds like the ticket for a grand finale.