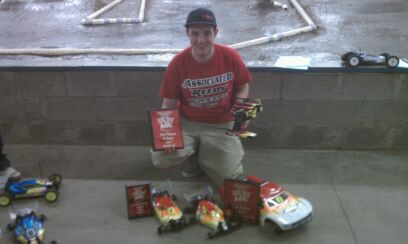 This past weekend JConcepts Team Drivers Kody Numedahl and Michael Schoettler attended the Gold Cup Race held at Tacoma RC Raceway in Tacoma, Washington. It was a very technical track and there was some close racing all weekend.

The first day of racing there were three qualifiers and Kody got off to a great start allowing him to secure the TQ for the Pro 2 class. Kody also had one TQ run in Modified Buggy and in the Modified 4wd class. The final qualifier was held the following morning and Kody was able to secure TQ in all three classes after round 4.

The mains were very close in all classes. When the dust settled, Kody ended with a win in Modified Buggy and Pro 2. Teammate Michael Schoettler took the win in Modified 4wd with Kody coming in a close second.

It was another successful weekend for JConcepts and a special thanks goes to Scott Brown and Tacoma RC Raceway for all of their hard work and hospitality.