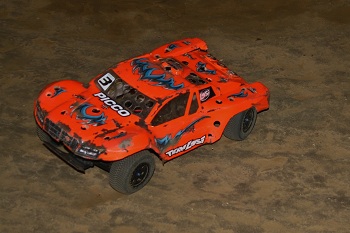 After the mains and Dash 4 Cash races, we got together for one more event, the short course truck enduro race.  10 teams competed in the event and each team consisted of two drivers. Each driver would take a turn running the truck for 15 minutes while the other driver was on the track to marshal his teammate if needed.  The trucks were lined up in single row for a holeshot start and we were on our way.

Some of the drivers on the track got a workout as they had to continually flip over their partner’s truck and chase it around the track.  The field was a mix of 2WD and 4WD trucks, and at the 15 minute mark all the trucks were brought into the pit lane for a battery and driver change. Then they were lined up again on the table top in front of the driver’s stand for another holeshot start and this time the trucks would run the track in reverse.  Speaking of reverse one team decided for the 2nd half of the race that they would run with their body on backwards which through you off since it looked like the truck was running in reverse. After 30 minutes of pure, short course carnage, Brad Shearer and Mike Nelson took home the win and split the $100 purse.