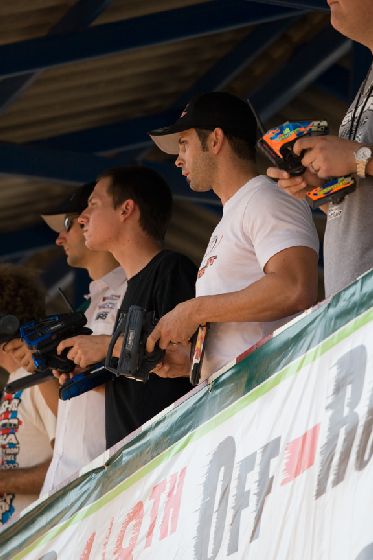 [nggallery id=45]After Friday night’s track grooming, many of the lower finals drivers were raving about how fun the track was. It was definitely well oiled, but there seemed to be a bit more traction than the previous time the track was ran on this oiled. Sunday morning is here and the track looks great. All of the deep wear patches are holding up well. Drivers walk the track carefully examining the obstacles in their lines. Two noticeably good sections are the 4 staggered bumps leading the the huge double on the back of the track. The inside line is the fastest as typical but the gamble is jumping the inside bumps as a double. It is by far a faster line but most drivers opted to single-single the section rather risk the crash. The off camber turn leading to this section is now butter-smooth and the face of the first hit has been repaired making it much easier to opt the fast doubling line. Conservative driving has definitely been paying off on this track though.

Months, even years of preparation have been leading up to this moment. Teams have spent tens of thousands of dollars in expenses to be here. Every single person in attendance is standing around the track and the mob of media folk crowd around the drivers as they enter the track. I’m sure the 30 minute introductions seemed like an eternity for the nervous drivers. Many of the drivers nerves were worn on their sleeves as they would anxiously crack jokes about getting the race started. That time could not have come soon enough. I grabbed Ryan Cavalieri’s car from him after he was done taking photos, wished him luck and headed to the pits with Loudog (Louis Cavalieri). Warm-ups started and it seemed like every single driver was shouting at their pitmen to make last minute changes and tuning. Nerves were breaking down the confidence of even the best drivers in the world at this stage. I walked out to the starting grid with Ryan’s car, topped it off with fuel, and listened for the countdown. Before I knew it, we were off to crown the 2010 IFMAR World Champion.

TQ Jared Tebo held the lead off the start while hard charging Ryan Maifield quickly worked his way up to the front. These seasoned drivers know that the race is long and daring passes at this point could hurt them in the long run. The lead was swapped a few times between Jared Tebo, Ryan Maifield, Cody King and Atsushi Hara. Maifield, plagued with bad luck all week but driving amazingly well, flamed out and dropped of from the lead lap. At that point Tebo, King and Hara pulled away from the pack. Different pit strategies became prevalent as Tebo pitted on a shorted schedule than King and Hara. Atsushi Hara was very obviously the crowd favorite as he has been residing in Thailand. Every time he would crash or gain a position on the track, the crowd would roar. Hara was clicking of extremely fast laps but made many mistakes throughout the race. He would remain in second and third the majority of the time, by no means having a bad race. Europe’s top qualifier, Renaud Savoya dropped out early in the race with a broken a-arm. Ryan Maifield’s run ended early with a broken rear shock and his teammate, Ryan Cavalieri, was having throttle issues that sent his car into the fence multples times, ultimately ending in a broken car. With 2 minutes to go in the race Cody King found himself in the lead with a very hard charging Atsushi Hara at his heals. What was once an 8 second lead was quickly clipped to 2 second as Cody case a jump and had a slight bobble. The clock was ticking down to its final moments. Hara was pushing his Hot Bodies car to its absolute limits. Cody jumped over the back double almost side-by-side with Hara. Hara’s car came up short and flipped onto its lid. He was quickly marshaled back into the race as King cased another jump shortly after. King’s lead was more than enough though as he crossed the finish line, threw his hat off the driver stand and pumped his fist victoriously. Congratulations to the 2010 IFMAR World Champion, Cody King!