We’re spoiled by electric power today. With brushless motors and LiPo batteries, it’s easier than ever to go as fast as you want, with quick recharge time between runs. But it wasn’t always this way: Back in the days of brushed power and Ni-Cd and NiMH batteries, the speed we take for granted now would have you chewing through motors and overstressing your packs. If you wanted to have real speed and power that held up all day, you had to go nitro—and did we ever! Nitro power has been part of the RC scene since the earliest days of the hobby, but it really boomed in the mid-’90s through the 2000s. Nitro-power choices were seemingly endless, but a few essential vehicles were the big drivers of the nitro explosion. Let’s take a look back at 10 of the true titans that rocked nitro RC. 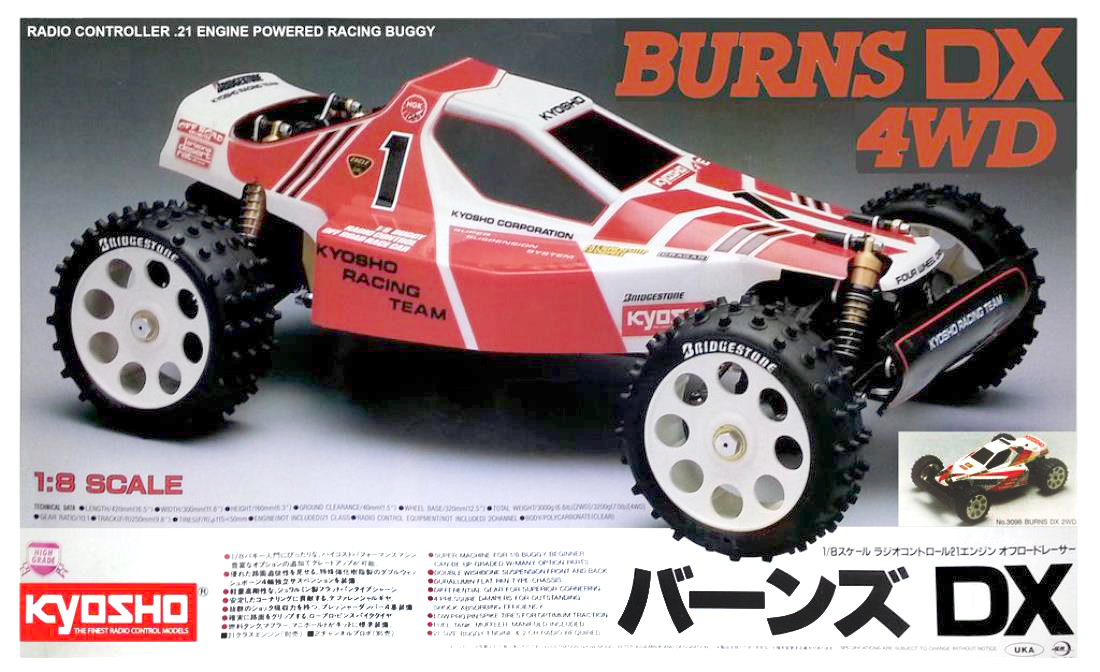 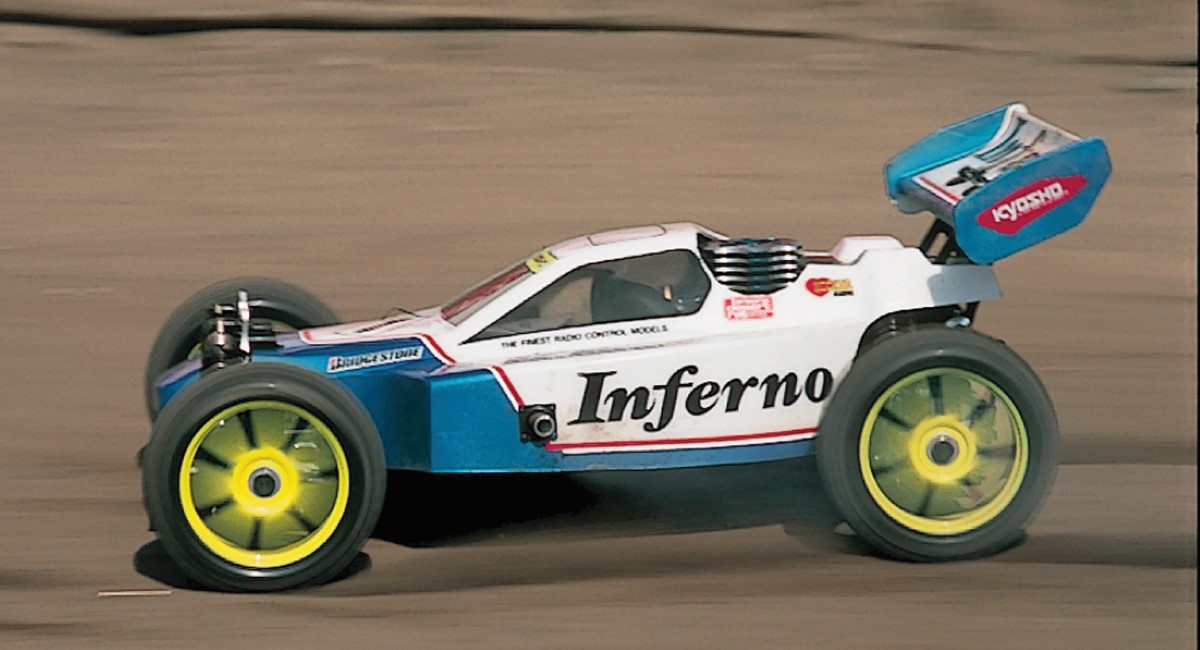 Kyosho Burns – 1987
Kyosho Inferno series – 1992
Before the Kyosho Burns, rail type chassis and chain-driven drivetrains were the norm. The Burns was the first buggy to use a plate chassis and a shaft-driven, 3-differential drivetrain, and it set the template for modern 1/8 scale buggy design. After the massive leap in nitro-buggy evolution represented by the Burns, RC mastermind Yuichi Kanai refined the design with the Inferno. With Kanai helming Kyosho’s nitro buggy program, the Inferno series went on to win an incredible six consecutive IFMAR World Championships (including a win with Yuichi himself behind the wheel in 2000). We take the essential design features of 1/8 scale buggies for granted now, but Kyosho got their first. 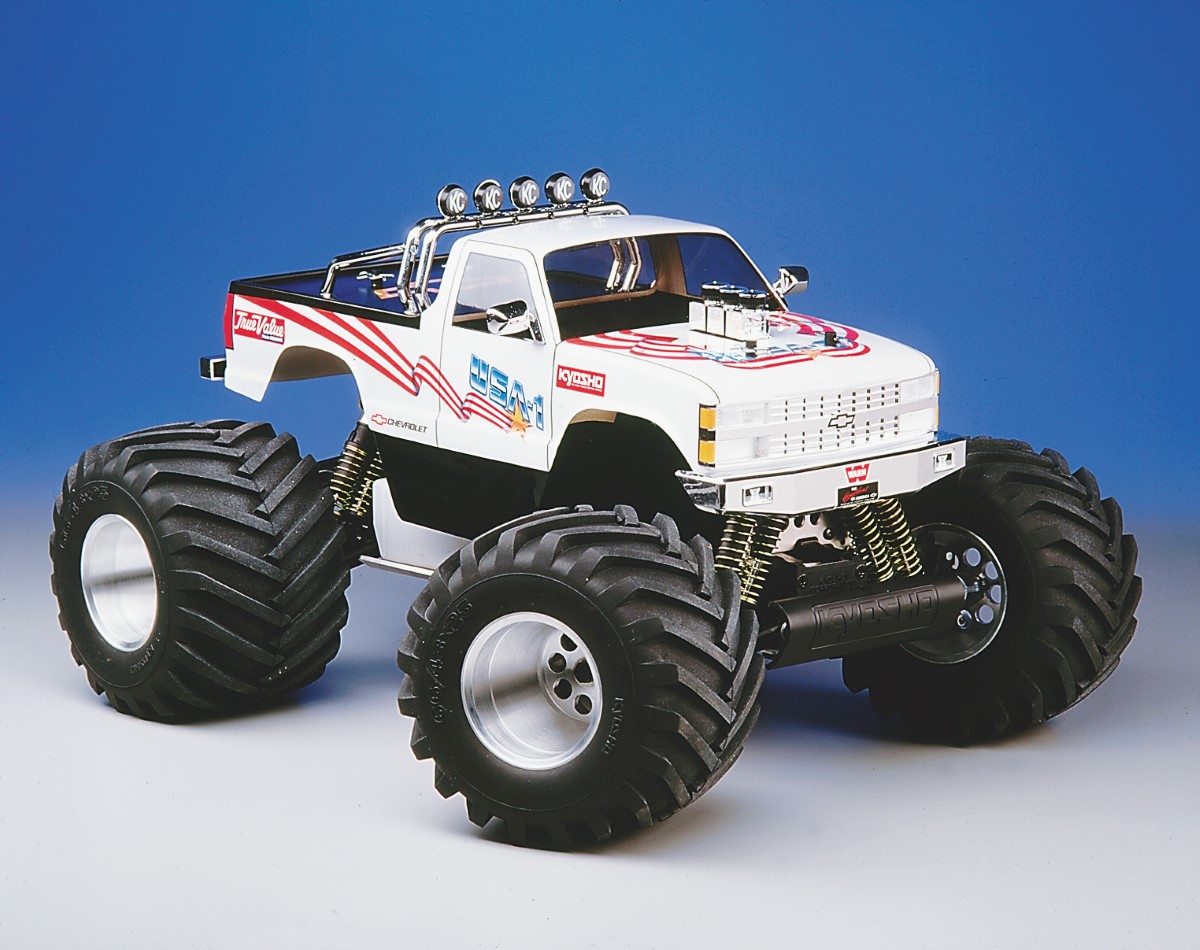 Kyosho Nitro USA-1 – 1992
The Inferno series wasn’t the only hit that sprang from the Kyosho Burns; the buggy also spawned the nitro scene’s breakout monster truck, the USA-1. And it wasn’t just a body, wheel, and tire swap; the big rig sprouted four extra shocks, and an extra gear between the engine and center differential made sure the drivetrain ratio was suitable to spin the truck’s super-sized tires. Since the USA-1 was based on the Burns, that also meant it had .21 power (engine sold separately, or course). That seems small compared to today’s bored-out big blocks, but back in the early 90s, it was crazy horsepower—especially when compared to the 540 motors in the electric monsters of the time. 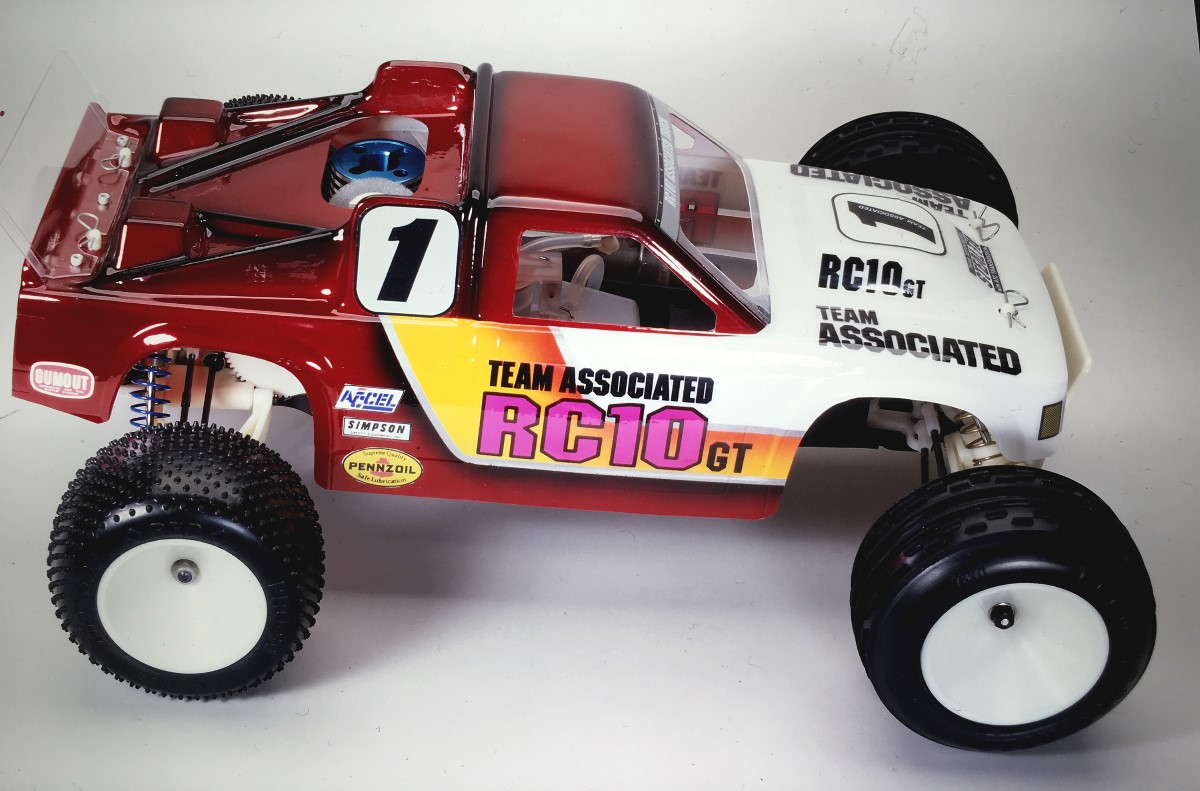 Team Associated RC10GT – 1993
The Team Associated RC10GT was released at a time where nitro conversion kits for electric stadium trucks were growing in popularity. The A-team didn’t convert their stadium truck into a nitro burning beast; instead they designed the truck specifically around nitro power. It made the “gas truck” category the hottest racing class and the RC10GT dominated it by winning every ROAR national event that it was entered into. Its influence extended off the track too, and many GTs saw action as high-performance play machines. 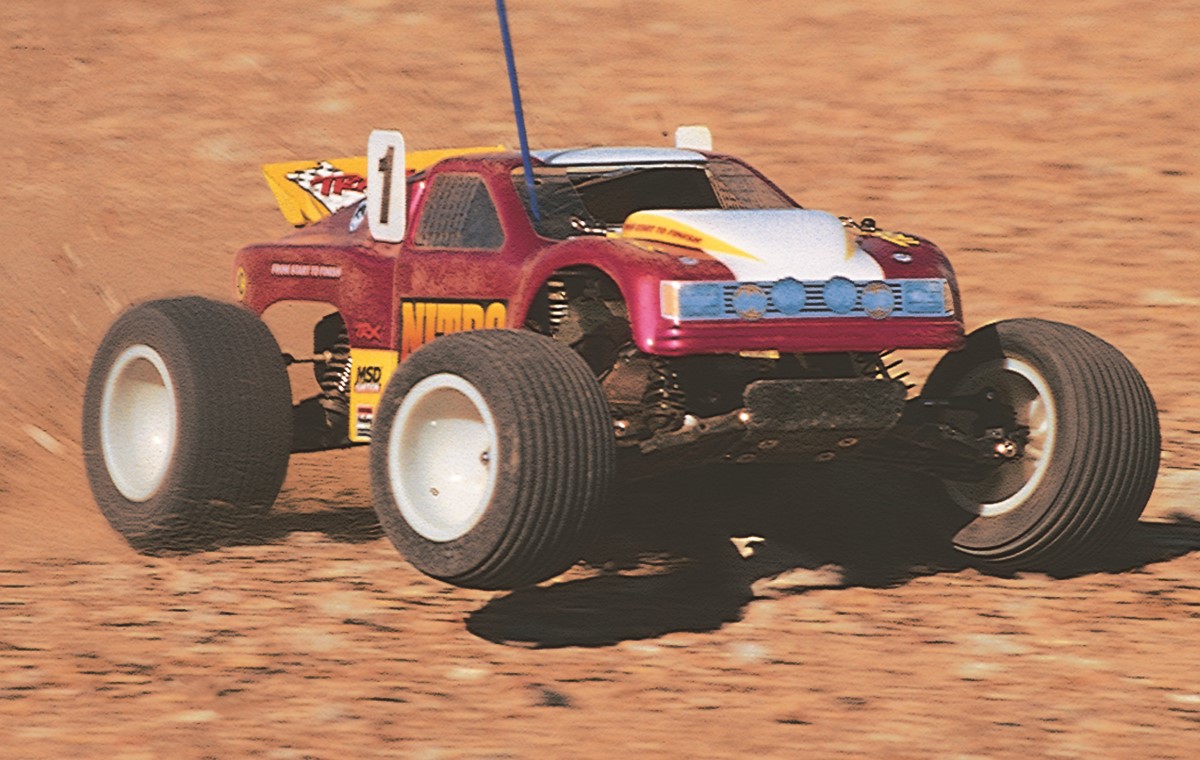 Traxxas Nitro Hawk – 1992
Today, we expect everything to be RTR, and if it’s a kit, everything had better be in the box minus the electronics and paint. If you wanted to go gas with the original RC10GT, getting the kit was just the start—you also had to pick out an engine, pipe, manifold, clutch, and a few other bits. You had to know what you needed, and it got expensive. Or, you could get a Nitro Hawk. Traxxas’ first-ever nitro car was offered as a kit, but the big sellers were the “almost ready to run” and RTR models. Pull-start .12 power was installed and ready to go, and the Hawk rolled out with an aluminum chassis on suspension borrowed from the Blue Eagle race truck. Traxxas sold a bunch of Nitro Hawks, and many modelers got their intro to fuel power with the affordable machine. 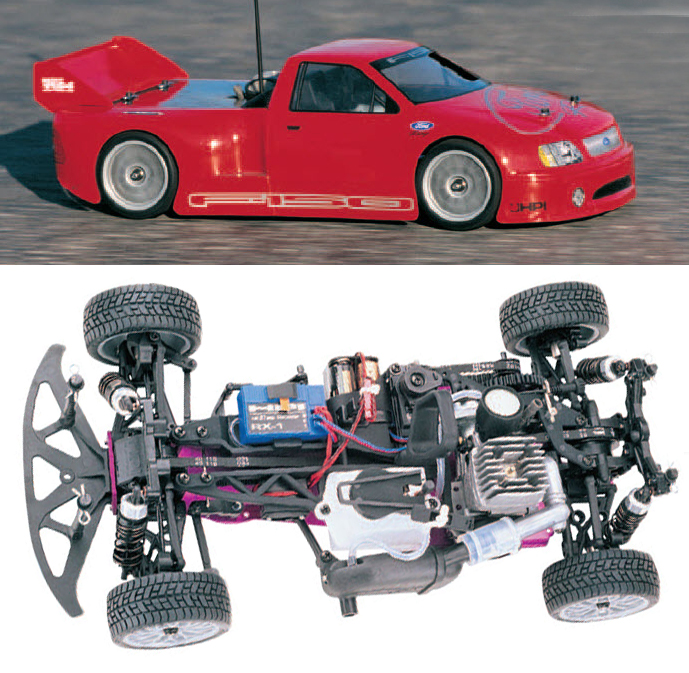 HPI Nitro RS4 – 1998
HPI started out as an accessory maker (remember their Super Star wheels?), and quickly grew into kits, starting with a fantastic F1 car. But HPI truly became a big player with the touring-car boom, first with the RS4-series electric car, and then with the Nitro RS4. Though not the first nitro touring car, the Nitro RS4 was the most popular and successful, and set the 200mm standard for the class. Racers flocked to the Nitro RS4, and the aftermarket exploded with hop-up parts. With HPI’s wide variety of great looking shells available to turn it into everything from a street pickup to a Corvette, the Nitro RS4 was also the prime choice for parking-lot pounding. 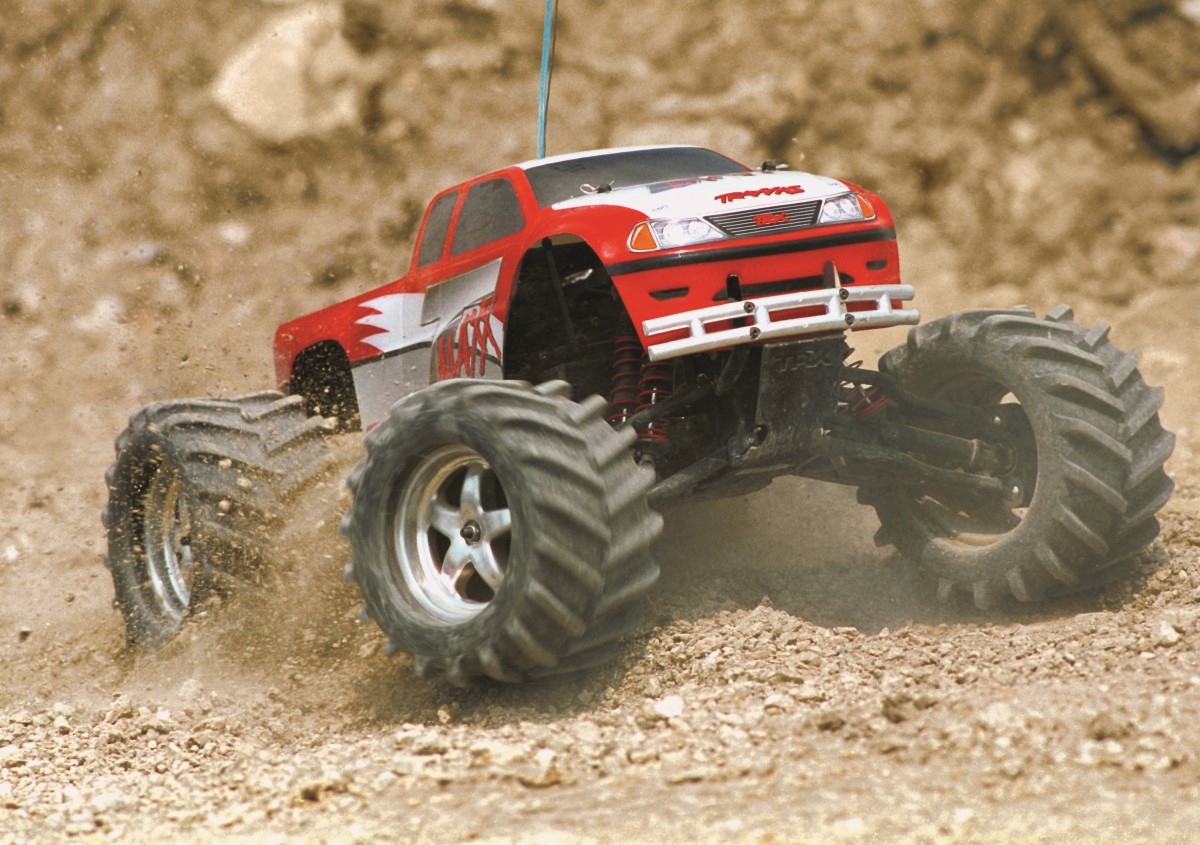 Traxxas T-Maxx – 2000
Hoo boy, the T-Maxx. There was no escaping this thing in 2000. Nitro monster trucking was not a hot category at the time, and the aging Kyosho USA-1 was only significant representative of the scene. And then POW, the T-Maxx hits. It’s big like the USA-1 and Clod Buster, but the suspension has gooey travel for days. Can’t be fast with just a .15 engine though—oh wait, it is, thanks to a 2-speed transmission. The T-Maxx was the total package. It made great sounds, it soaked up the worst terrain, and plowed over or through whatever you aimed it at. It even had reverse! And it was RTR, so anyone could get in on the action—which they did, in droves. The nitro-power boom burned twice as hot after the T-Maxx, and nitro monsters became the category of the decade. 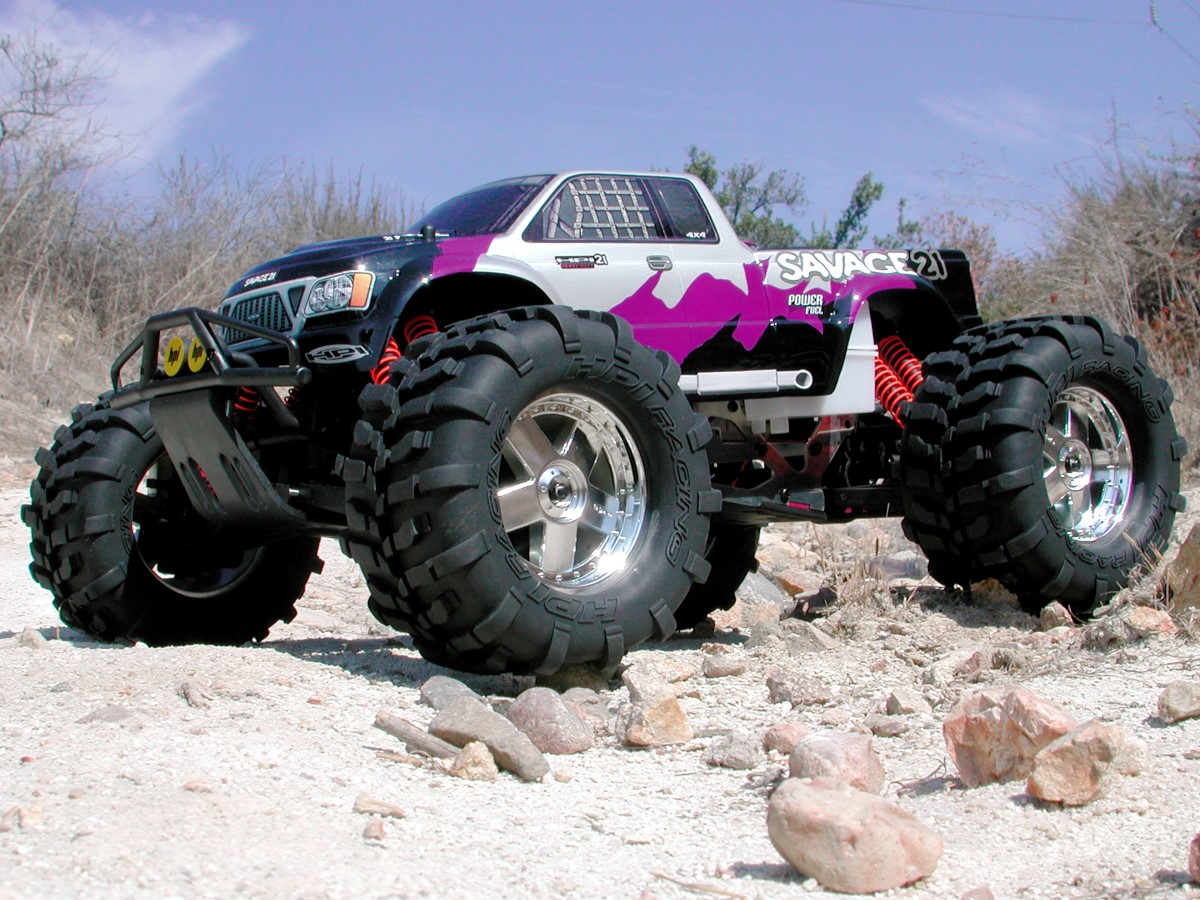 HPI Savage – 2002
A lot of trucks came and went during the T-Maxx era, and chances are you’ve forgotten nearly all of them. One that has truly stood the test of time and is still popular today is the HPI Savage. We give HPI a lot of credit for going their own way with the Savage. While clearly designed to go head to head with the T-Maxx, HPI didn’t merely clone the machine as many others did. Instead, HPI went for big-block .21 power strapped into a now-common “twin vertical plate” chassis that gave the truck an identity and attitude all its own. The Savage quickly developed a reputation as a bigger, more brutish take on nitro monster fun, with impressive durability as a bonus. Since its debut, HPI’s heavy hitter has seen bumps in displacement and design refreshes, and it’s still a top pick for monster mayhem. 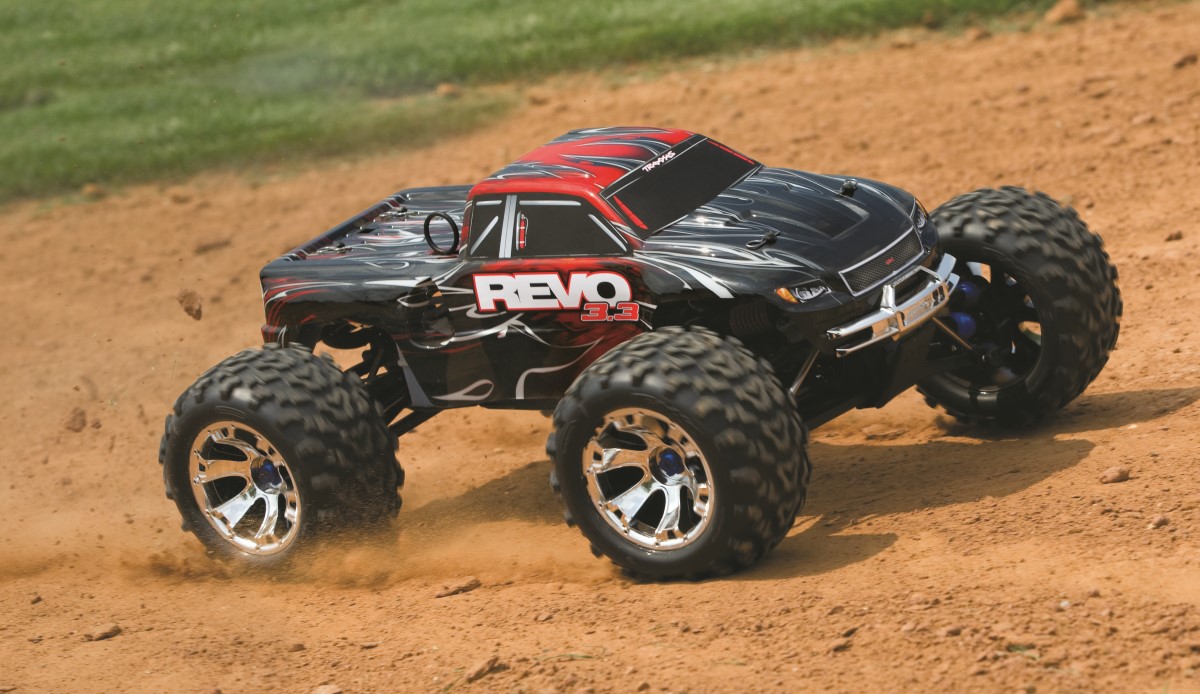 Traxxas Revo – 2004
Traxxas was still riding high on the T-Maxx wave a full four years after its release, even as practically every other brand took their shot at toppling RC’s top monster. It turned out the only brand that could top Traxxas was Traxxas, and that brings us to the Revo. The innovative, athletic monster still impresses its intricate “3D semi-monocoque” chassis and F1-style laydown shocks, and we’re used to seeing them today—but in 2004, they were downright mind-blowing. Also mind-blowing was the then-new TRX 2.5 engine that powered the truck, which posted dyno numbers to rival exotic racing engines. Since its debut, the TRX 2.5 has grown into the TRX 3.3, and the Revo 3.3 remains a best-seller for Traxxas. And a number-one pic for you—the Revo has won “Best Nitro Truck” in our Readers’ Choice Awards every year since it came out. 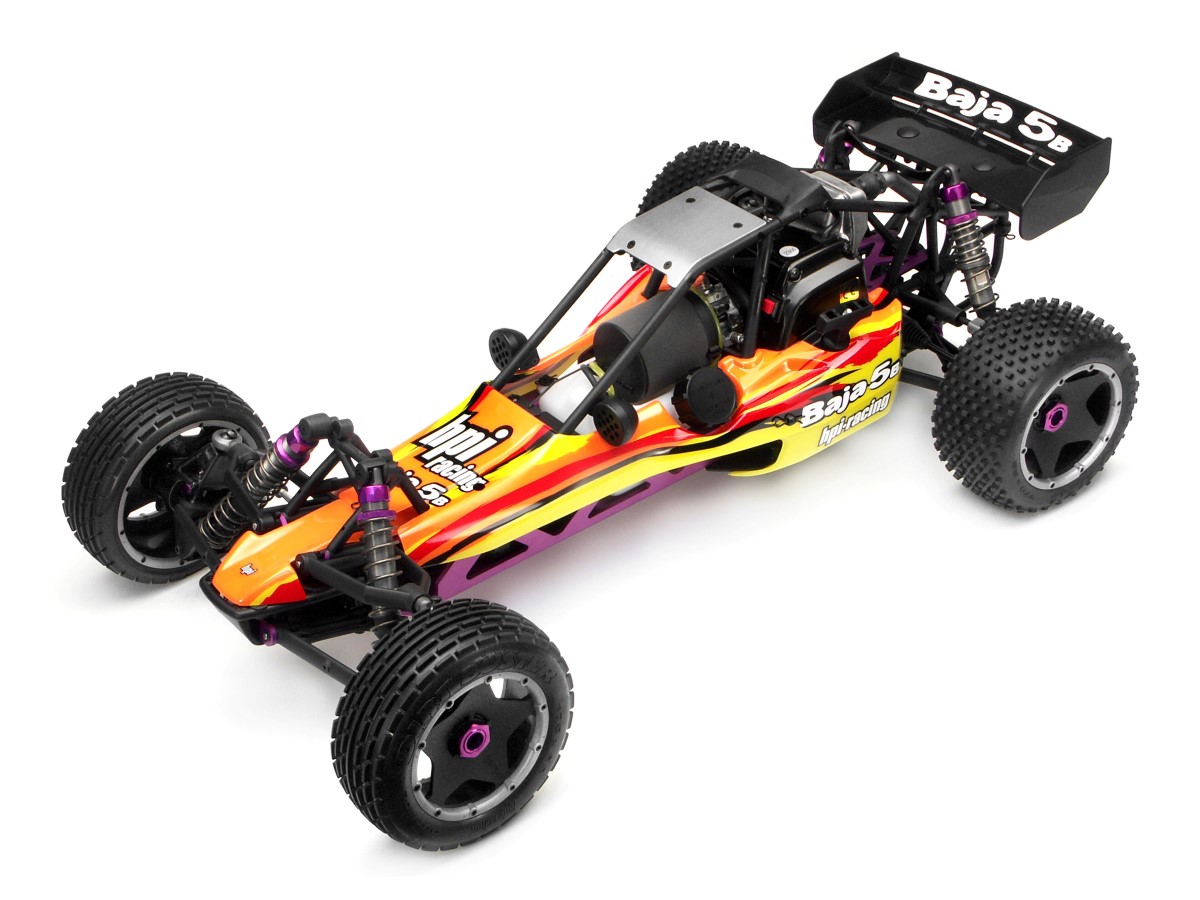 HPI Baja 5B – 2006
HPI single-handedly made 1/5-scale off-road what it is today. 1/5 scale gasoline power had long been established as an RC category, albeit a mostly European one. And an expensive one, despite 1/5 scale designs being relatively crude compared to 1/10 and 1/8 scale machines. The Baja 5B was unlike any 1/5-scale vehicle on the market and it came in swinging with a refined design and performance that couldn’t be found anywhere else. It became the go-to RC vehicle for those looking to get into large-scale cars, and helped RC find a whole new audience as dirt bike and quad guys added the 5Bs to their big-boy-toy arsenals. The breakthrough buggy has been steadily improved since its release, and remains integral to the large-scale scene. 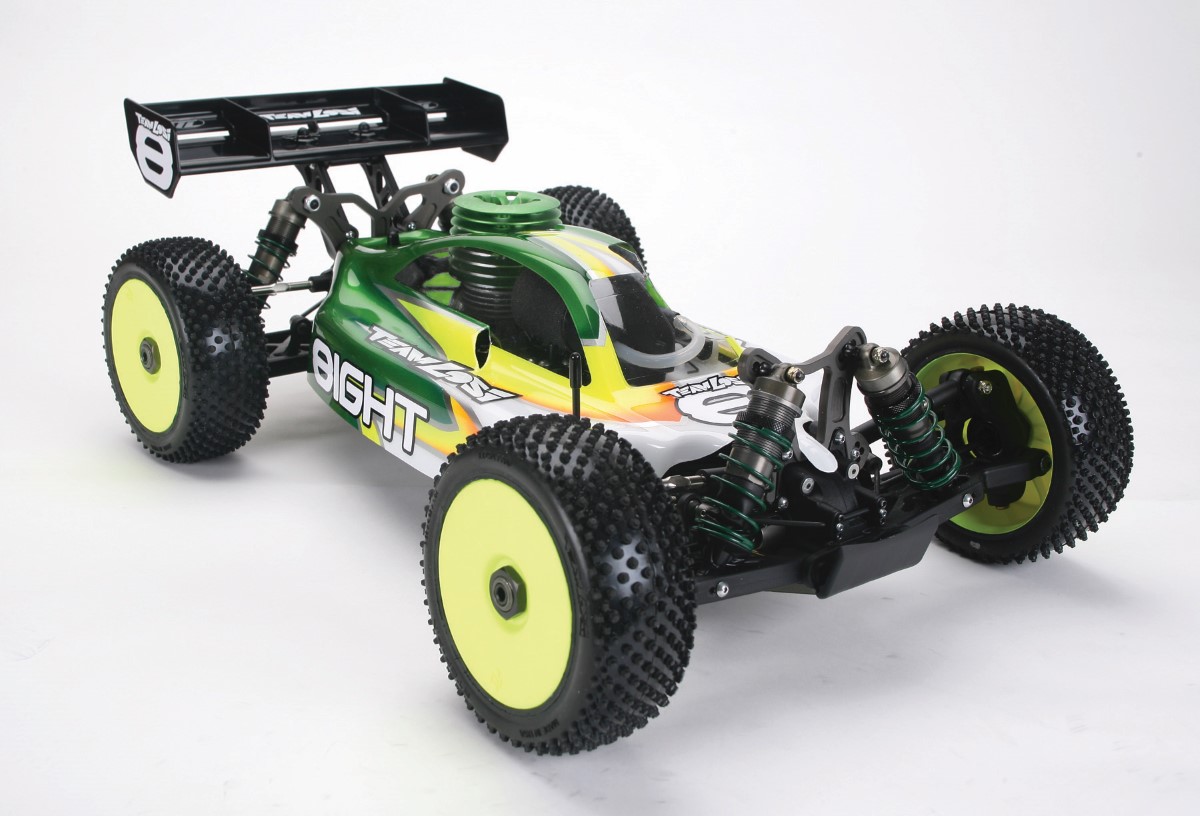 Team Losi 8IGHT – 2006
Back in 2006 when TLR was still known as Team Losi, the brand was a dominant force in 1/10 scale racing but had no 1/8 scale game—because it had no 1/8 scale car. That changed the moment the 8IGHT was announced, and the buggy was an instant hit. Instead of playing it safe and sticking close to what worked for Kyosho, Mugen and others, Losi went their own way with dramatically new design and many features that weren’t found on any buggy at the time. The “clunk” fuel tank allowed the car to run upside down, the engine was nearly dead-center in the chassis, and the brake sizes were staggered. The 8IGHT started winning races as soon as it hit the track, and remains a favorite in its latest “4.0” trim. In fact, the 8IGHT has been your choice for “Best Nitro Buggy” in our Readers’ Choice Awards every year since it came out—that’s eleven years on top.